Poor old art. Somewhere along the line it seems to have become the protest junkie’s victim of choice. The recent epidemic of climate change activists gluing themselves to paintings is a telling example. It started in Glasgow with a gang of students invading the Kelvingrove Art Gallery and sticking themselves to the frame of a […]

Poor old art. Somewhere along the line it seems to have become the protest junkie’s victim of choice. The recent epidemic of climate change activists gluing themselves to paintings is a telling example. It started in Glasgow with a gang of students invading the Kelvingrove Art Gallery and sticking themselves to the frame of a 19th-century landscape by Horatio McCulloch called My Heart’s in the Highlands. The next day two protesters glued themselves to a Van Gogh at the Courtauld Gallery in London. Then they moved to Manchester, where they attached themselves to a Turner.

Last Monday another pair of students gumshoed into the National Gallery in London and stuck themselves to Constable’s most popular picture, The Hay Wain, having first glued onto the original a doctored version showing missiles and forest fires destroying the peace of the English countryside. On Tuesday, at the Royal Academy, five more appended themselves to a copy of Leonardo da Vinci’s Last Supper. And, to top it all, a male climate protester in Paris, dressed as an old woman in a wheelchair, attacked the Mona Lisa and smeared her with cake. 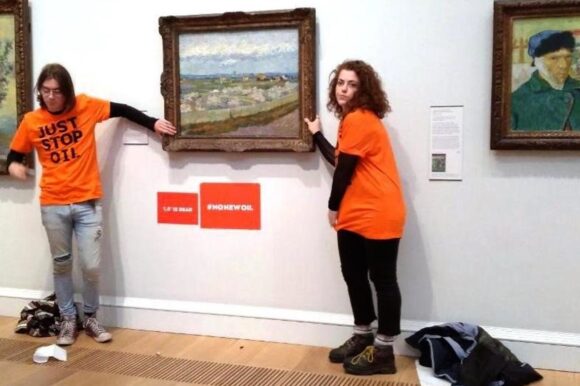 Unfortunately, none of this is new. Art has always had something about it that attracts gluers, sprayers, smearers and slashers. The most famous such incident at the National Gallery occurred in 1914, when the demented suffragette Mary Richardson, who went on to lead the women’s section of Oswald Mosley’s British Union of Fascists, slashed Velazquez’s beautiful Rokeby Venus with a butcher’s cleaver. It was like a scene from Psycho, with Richardson playing the Anthony Perkins role.

Fast-forward half a century to 1972 and we find an evil day in the Vatican when a Hungarian called Laszlo Toth climbed over the railings of St Peter’s Basilica and began hammering away at Michelangelo’s sublime Pieta, shouting, “I am Jesus Christ — risen from the dead.” By the time Toth finished his crazy bashing 100 fragments of Michelangelo’s marble were scattered across the floor.

So let’s not kid ourselves that there is anything harmless or defensible about protesters having a go at art. Climate change is a good cause. So was suffrage for women. But when the protest moves into the art gallery it binds itself to urges that are deep, dark and regrettable.

The worst such incident I have witnessed was the destruction of the Bamiyan Buddhas by the Taliban in 2001. Over the course of two weeks the two great Buddhas carved into a cliff in Afghanistan in the 6th century — one 125ft tall, the other 180ft — were dynamited into nothingness on the instructions of the Taliban leader Mullah Omar. It made me cry. Seeing these monumental masterpieces of ancient statuary being so casually destroyed for such dim political reasons brought home the seriousness of the urge to attack art.

Last week’s gallery gluers did less damage than the Taliban. The Hay Wain’s varnish was damaged, but no more. As for the angry loonies who sprayed, “No new oil” underneath the Leonardo copy before sticking themselves to its frame, the spraying damaged the wall, not the picture.

It’s easy to think, therefore, that nothing too serious is occurring here. But a quick flick through history will tell you that the compulsion to attack art has a bleak and deep undertow.

The Taliban destroyed the Buddhas because, in a perverse, regrettable way, they were acknowledging that art has power. That’s why the second commandment given to Moses by God on Mount Sinai bans its manufacture: “Thou shalt not make any graven image of anything that is on earth or in the sea below.” It’s why Islam and Judaism forbid the making of images. It’s why mobs of angry iconoclasts rampaged through Protestant Europe destroying art. It’s why Moses, having descended from Sinai with his new instructions, fell into a giant rage and destroyed the Golden Calf the Israelites were worshipping.

The recent epidemic of sticking and smearing is but a feeble echo of these dark ancient events. But it is an echo.