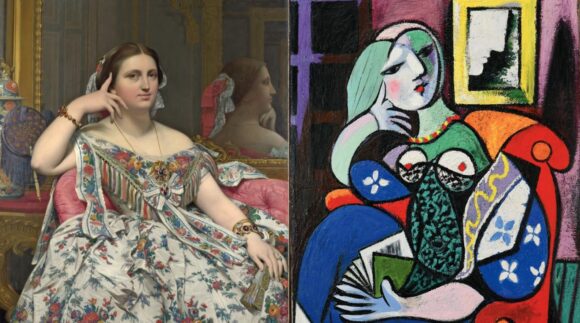 We live in litigious times. So litigious that the densely informative and riveting event that has popped up at the National Gallery — a comparison between Ingres’s magnificent portrait of Madame Moitessier and Picasso’s Woman with a Book, a deliberate paraphrase of the Ingres — could not have happened had the artists been working today.

In matters of art, contemporary litigiousness has evolved into something ludicrous. Especially when American lawyers are involved. The Andy Warhol Foundation has just lost a case with the photographer who took the original photo of Prince that Warhol transformed in a celebrated silkscreen. To my eyes the vibrant Warhol is a completely different artwork from the black-and-white photograph that preceded it. But it’s gone to the US Supreme Court. The irony, of course, is that the Warhol Foundation is itself notoriously litigious when it comes to “borrowings” from their man Andy. Its repressive behaviour has played a successful part in stoking the modern-day plagiarism fires.

Anyway, back at the National Gallery, the marvellous show that would not have happened if now was then takes us deep into the creative process and highlights how important it is not to confuse inspiration with repetition. “Good artists copy, great artists steal,” Picasso once quipped. He was a magpie who turned recurrently to his predecessors for raw materials. With exciting results.

Ingres painted Madame Moitessier in 1856. Or rather he finished painting her then, having started the picture in 1844, an unusually long gestation even for the notoriously exacting Ingres. The model, Inès Moitessier, was a famous beauty of the Second Empire who married an older businessman. The picture commemorates their wedding. She was 23 when Ingres began. Her husband was 45.

Ingres shows her sitting in a well-stuffed armchair in a plush Parisian salon surrounded by gilded ornaments and elegant Japanese knick-knacks — a silk hand-screen, an Imari vase. So far, so Second Empire. Three things, however, make the portrayal exceptional.

First, the curious pose she adopts, with her right hand and its “boneless fingers” raised to her head, is indestructibly opaque. Is she thoughtful? Is she coquettish? Is she relaxed? All the readings are up for grabs.

Also striking is the sheer quantity of dress with which Ingres has enveloped her. The loud floral pattern takes up a third of the picture. Yet for all its flowery hugeness the dress manages to be slyly revealing. Madame Moitessier’s naked arms and the hint of bosom bulging above her neckline were deemed scandalous at the time. Again, very Second Empire.

The third novelty is the reflection in the mirror behind her left shoulder. It should be a simple back view. But by twisting the optics, Ingres has fashioned a strict profile that would fit happily on a cameo or a stamp. It’s a picture, therefore, that is packed with swirling innovation. But what makes the portrait of Madame Moitessier so special is the way her face seems to sit implacably in the eye of the storm. How firmly she fixes us with her stare.

The display — just two pictures, side by side — makes you notice all this, and evaluate it. Picasso saw Madame Moitessier in an Ingres retrospective in Paris in 1921. The picture haunted him, and he kept quoting it, although never as obviously as he does in Woman with a Book, a picture painted ten years after the Ingres show, in 1932.

Taking the place of Madame Moitessier is Marie-Thérèse Walter, Picasso’s young mistress who, according to legend, he met outside a department store in Paris when she was 17 and he was 45, an age difference so yawning it’s almost in the Mary and Joseph league.

“Miss, I have the feeling we will do great things together,” Picasso is said to have said to Walter. That bit at least is measurably true.

Borrowed from the Norton Simon Museum in California, Woman with a Book parallels the Ingres in obvious ways. A young woman sitting in a red armchair holds up her left hand to her face with wobbly fingers. She wears a dress decorated with flowers. The mirror behind her reflects her profile. If Ingres v Picasso went to the US Supreme Court, Ingres would slam-dunk the victory.

But in art it’s the differences that count, not the similarities. The transformation wrought here by Picasso results in an image with a thoroughly different presence. Where Madame Moitessier confronts us with her stare, Walter looks past us into the distance as if she’s daydreaming. Ingres fends us off. Picasso pulls us in.

Where Madame Moitessier is slyly sexy with her bare arms and her hints of heaving bosom, Picasso’s mistress is dressed in full-on seduction wear, her improbably round breasts popping out of a black fishnet number that reveals all the way down to her vulva. And yet how serene she remains.

In the Ingres the fierce colouration is confined to the sitter’s dress. In the Picasso it has flooded out to fill the entire image. This many colours ought not to sit comfortably together. But they do.

By swapping Madame Moitessier’s fan for a book, by turning his mistress’s eyes to the distance, by giving the reflection in the mirror a voyeuristic presence, Picasso has woven a complex storyline into a simple situation. Stealing can be really productive. Artists should do more of it!

Picasso Ingres: Face to Face is at the National Gallery, London WC2, until Oct 9