President Zelensky of Ukraine said something marvellously true about art when he popped up so fiercely, so unexpectedly, at the 59th Venice Biennale. Speaking on a live feed from Kyiv piped into the Scuola Nuova della Misericordia, a typically immodest Venetian hall designed by the great Renaissance architect Jacopo Sansovino, Zelensky, dressed cheaply in his trademark olive, pointed out that only art can capture the emotional realities of war: the feelings of soldiers coming across heaps of rotting bodies in the city of Bucha; the feelings of children searching hopelessly in the rubble for their dead mother; the feelings of medics trying to save the mutilated while their hospital was being bombed. Facts cannot convey those horrors, Zelensky said. Art can.

Before him on the same Ukrainian feed, a startling samizdat broadcast from a young woman in Mariupol took us into the dark basement in which she had been holed up since the Russian invasion. She was astonishingly direct. I don’t recall ever having witnessed such tangible defiance as we saw from the wild-eyed basement dweller in the shaky video from Mariupol. Later the news emerged that she’d been killed a week before her Venice appearance.

Zelensky’s words and the heart-breaking testimony of the Ukrainian woman felt like a knife slicing through the plate of wobbly panna cotta that is the Venice Biennale. It turned your critic into a teary wreck. And that was the state I was in when I staggered out into the cool Venice air and was engulfed by the pampered, privileged, Gucci-clad, party-loving horde that constitutes the art world. Where’s the next party, they buzzed. Can you get me a ticket? Do you like my shoes? 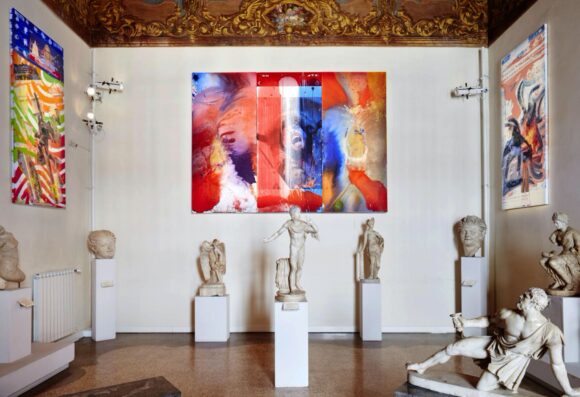 Two worlds collided at the 59th Venice Biennale. One was the powerful, crucial, history-changing force that is art. The other was the corrupted, expensive, dismaying force that is the art world. My head kept switching between the two, like the Centre Court crowd at Wimbledon watching a Nadal rally. Venice is the perfect location for the oldest and most important of the world’s biennales precisely because it feels so cut off from the quotidian. The moment you step on to your first boat, and leave behind your last car, you know you are somewhere different. Art can usually thrive in these circumstances. Occasionally the sense of being cut off becomes an issue.

So it was at the 59th Biennale. Delayed by a year because of Covid, planned and themed before the pandemic, sidebarred by developments in Ukraine, it felt like an occasion overtaken by real events. There was plenty of good art on show. More perhaps than usual. Yet the sound of the art world fiddling crazily while Rome burned was audible from every calle.

This year’s theme, The Milk of Dreams, was taken from a children’s book by the surrealist painter Leonora Carrington (1917-2011). The book describes a magical world where “life is constantly reimagined through the prism of the imagination”. Carrington would make up stories for her children and illustrate them with paintings on the walls of the living room: the tale of Little Angel who does “pipi” on people from above while an elephant poos in her tea; Headless John whose mother sticks his decapitated face on backwards with chewing gum.

There are people who thought the book charming. I found it silly, and not a little weird. As the inspiration for a biennale, it’s about as far away from events in Mariupol and Kyiv as it is possible to get on planet Earth. 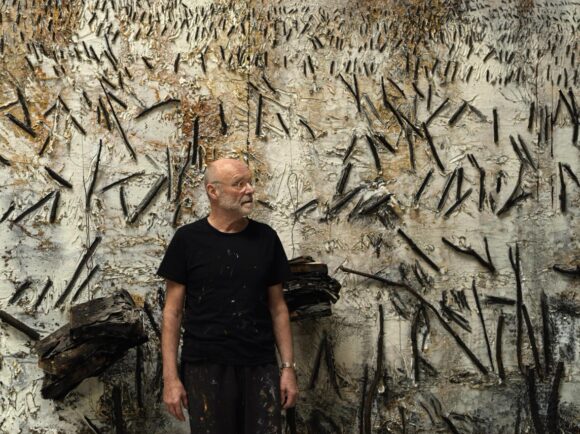 Inspired by Carrington’s wacky fantasies, the biennale’s curator, the permanently smiling Cecilia Alemani, has set out to reflect a world where “everyone can be transformed, become someone or something else; a world set free, brimming with possibilities”. So we get a lot of robots (Carrington claimed she was the product of her mother’s encounter with a machine!), mutations, cut-up realities and things turning into other things as artist after artist in the central show scuttles down the rabbit hole of lukewarm surrealism.

Only the strong survive. Surrounded by creepy sci-fi and dotty fantasiesof transformation, Paula Rego impresses mightily as a giant in a world of Lilliputs. Her twilit gallery feels suddenly mature and deep. A ring of angsty self-portraits interspersed with her rarely seen sculptures prove to everyone else at the event how a seasoned imagination can transform dark childhood imaginings into profound ruminations upon adult life. I have seen a lot of Rego displays. I don’t think I’ve seen a better collection than here. Right now, in a world’s greatest artist vote, she would get my tick.

Carrington herself features in an archive display devoted to the forgotten women of surrealism: an uber-trendy subject that has become an art world staple. She hangs alongside a team of like-minded contemporaries — Leonor Fini, Remedios Varo, Toyen — who would be difficult to tell apart in a “no labels” test. All of them favour the “woman turns into a bird” type of textbook surrealism with only the compelling Dorothea Tanning standing apart with her scary psychic storms.

Anyone hungry for signs of sense and sentience in this feminine war on reason is advised to fast-forward around the interchangeable art in the central show at the main biennale venue of the Giardini and head out to the national pavilions, where much that is worthwhile can be found.

The French have an entertaining takeover by Zineb Sedira who transforms one part of their pavilion into an Algerian bar, circa 1960, complete with a live smooching couple, and the other part into a full-scale cinema where a film about her mother’s journey to Europe is interspersed with meditations upon cinematic reality by Orson Welles! F for Fabulous!

Also outstanding is the American pavilion, which has been radically transformed by another black artist, Simone Leigh. The pavilion usually looks like a polite slice of American neoclassicism in the manner of Thomas Jefferson. By giving it a thatched roof and surrounding it with wooden poles, Leigh turns the white house into a black house. Inside, her inventive sculptures revisit the clichéd “primitivism” discovered in African art by European modernists to focus instead on the human stories that lurk within. 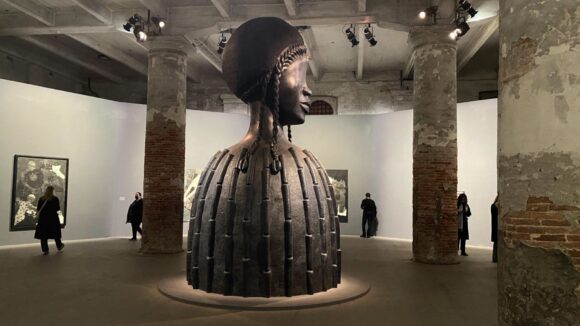 Leigh is also one of the stars of part two of The Milk of Dreams, which continues at the Arsenale, the sprawling dockyards of the Venetian navy. Her giant bronze sculpture of a black woman whose lower half turns into a village hut is the first thing you see. Wow, I thought. This is going to be good. Unfortunately it’s largely downhill from here as the second of The Milk of Dreams’s most obvious ambitions, to highlight the work of indigenous creatives from around the colonised world, turns into unsettling cultural tourism. Being lectured on the fate of the Sami people by the Gucci-clad liggers of the international art world feels like a mistimed joke. The thought of all those Prada pumps getting wet in the Lapland snow as they step around the reindeer poo is not a serious thought.

Don’t get me started, too, on sustainability when the mind boggles at the number of flights needed to bring the art world to Venice or the number of crates used to transport the aperitifs for the endless round of parties.

Out of the 213 artists selected for The Milk of Dreams 191 are women. It’s an extraordinary statistic and one that endows the event with a sense of collective purpose that is easy to miss in the art itself. It’s a corrective that was needed. Now I hope we can move on to a situation where art comes first and identity comes second. The me, me, me issues being relentlessly flagged in Venice are beginning to feel uncomfortably out of step with the us, us, us world in which we live. Ask the woman pleading for our help from the bunker in Mariupol.

Half my readership may be wondering: how did the men do at the 59th Biennale? I can’t lie. They were, in the main, big and blokish. Notably Anselm Kiefer, who was handed the keys to no less a venue than the Palazzo Ducale in St Mark’s Square and proceeded to fill a couple of its grandest halls with huge slabs of mega art that felt like scenes from a giant Second World War movie. Submarines. Explosions. Frothing seas. The battle culminated in the destruction of the Palazzo Ducale itself. On the pottiness scale, it was Leonora Carrington x 10,000.

I preferred Raqib Shaw at the Ca’ Pesaro, where a suite of intricate paintings based on old master examples showed the artist dreaming of a gentle life in a beautiful garden — Monet-style — while the world outside burned, burned, burned.