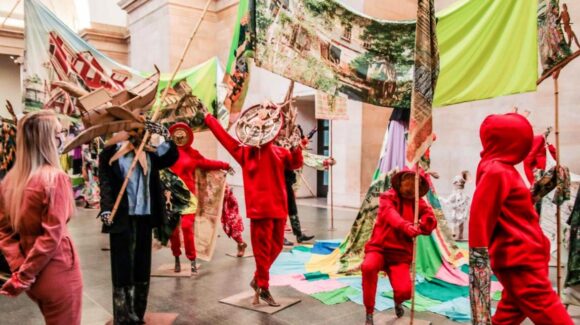 Once a year at Tate Britain the most imposing galleries in the building, the Duveen Galleries, are turned over to a contemporary artist to fill. Called the Tate Britain Commission, it’s a mighty annual challenge.

The Duveen Galleries are named after the crooked art dealer who defaced the Elgin Marbles to make them appear whiter (now there’s a name I would like to see removed from a wall). They are seriously difficult spaces to use. Built in the 1930s, they stretch down the length of Tate Britain for 300ft, with neoclassical walls looming over you like cliffs, punctuated by Ionic columns determined to impose order. Many a contemporary artist has foundered in the effort to take on these fascistic canyons. 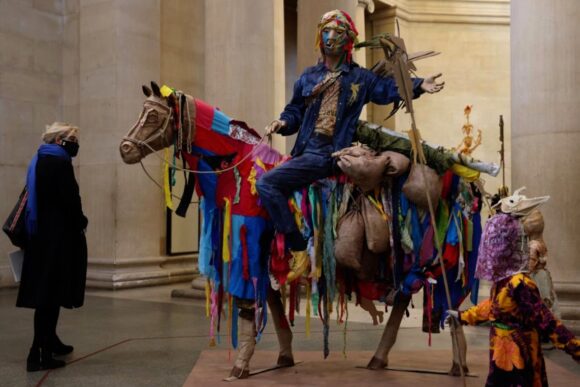 What a relief, therefore, to witness Hew Locke’s installation called The Procession, which fills every problematic inch of the Duveen Galleries, and does so dazzlingly. On all artistic levels — imagination, effort, scale, invention, colour, excitement — The Procession is a triumph.

Locke, born in 1959 of Guyanese descent, has long been one of the pioneering Caribbean artists whose work brings precious emotion and passion to British art. His encrusted sculptures, with their homemade textures and folky moods, go against the grain of British modernism with its appetite for coolness and its self-conscious conceptual bent. For most of his career Locke did not fit in. Now, suddenly, he does.

He is one of the key exhibitors in Life Between Islands, the beautiful and rousing Tate Britain show that brings together artists of Caribbean descent working in Britain since the 1950s. In that display he’s a smaller presence in a boisterous crowd of creatives. In the Duveen Galleries he commands a gigantic space that most artists find ungovernable.

Essentially he has turned Tate Britain into Notting Hill, and arranged for a sweeping, swaying, silent-but-noisy carnival procession to parade down the centre of the gallery and fill it with issues relating to the Caribbean presence in Britain. I’m not certain how many lifesized figurettes are involved in this tidal wave of dancing and marching. I gave up counting after 40. We’re talking somewhere over 100. And then there are the horses. The people in wheelchairs. The children. 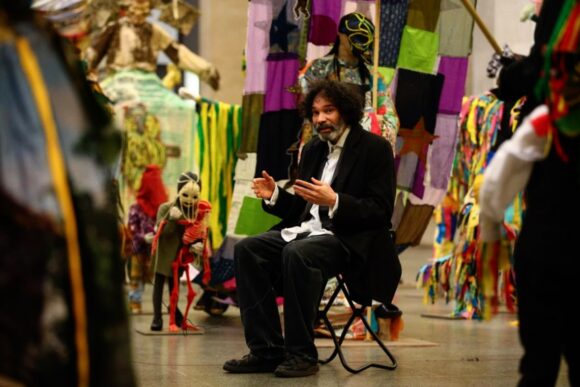 The overall impression is of a huge crowd parading down the fascistic Duveen and reclaiming it for the streets in a colourful display of Caribbean trespassing. With a practised eye for carnival and its dynamics, Locke divides The Procession into sections: the posh bit with men in suits; the red bit, which feels like a band. So the entire surge forward feels like a sculptural progression.

Yet it isn’t only carnivals that feature boisterous crowds sashaying though the streets. So, too, do protest marches. And as you start leaning in closer to inspect the individual figures, the truer, deeper meaning of The Procession becomes evident. This isn’t just some madcap voodoo carnival that has been misdirected to Tate Britain. Every figure here is intent on making a point about Europe’s colonial past. Every processionist protests, accuses, confronts.

It’s all in the detail. One of the joys of the piece is the endlessly inventive way in which the parading figures have been assembled from cardboard, mannequins, animal masks, bits of cloth and rag. Each member of the ragtag army moves and dances in an individual way. It’s impossible to imagine the amount of work involved in creating them.

And as you begin to pay attention to the rags, flags and banners out of which the column of pretend humanity has been assembled, you start to notice the accusations being sartorially smuggled in. Printed on the cloths and rags are sales tokens and share certificates relating to historic Caribbean businesses — the digging of the Panama Canal, the establishment of the banana plantations. Companies from Belgium, Britain, Russia are issuing stocks in cruel Caribbean pipe dreams. Enterprises that require slaves to work them are being bought and sold.

As all this is recognised, the carnival parade grows darker and darker. See that woman on a plinth printed on the faded shirt? That’s Victoria, empress of here, there and everywhere in a world painted red by the exigencies of colonialism. See those Jamaican mansions barely visible on that banner held by the kid at the back? That’s a house in which the colonists lived.

I could go on and on. And to prove that the gods of art are overwhelmingly on Locke’s side in this argument, what should have taken place in the week The Procession was installed but that awkward Caribbean tour by the Duke and Duchess of Cambridge, riding in white through the streets of Jamaica on the back of the royal Land Rover, like a pair of Roman charioteers, or touching the fingers of excited black children thrust through the bars of a fence.

Locke’s sweeping, busy, hugely ambitious, minutely detailed installation is many things. One of them is the perfect artwork to illuminate a pivotal royal moment.