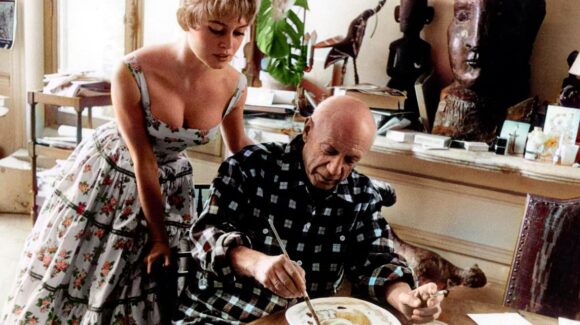 One of the perks of being an art critic is that you get to visit artist’s studios. Sometimes, I manage to inveigle my way into the alchemist’s lair for the simple reason that I’m dying to see it. Studios are such fascinating and telling sites of work.

When I interviewed Yoko Ono in New York, she showed me the spaces in the Dakota Building in which she and John Lennon had lived and worked. In a big white room was the big white piano on which she and Lennon had recorded Imagine. Next to it was a looming golden sarcophagus containing an unwrapped Egyptian mummy!

But the really telling moment came in the kitchen. Next to the large table where she did most of her work was a fridge plastered with photos, attached with magnets. I looked closer. They were private photos of John. Polaroids. Kodak snaps. Yoko makes cool, purist art. Most of it is strikingly white. But the loving emotions that hide behind her purist whites were laid bare on the fridge of her working kitchen.

The other day I went to interview David Hockney in his studio in Normandy and was struck by the dramatic sense of order in his converted barn. Everything was in exactly the right place. Hundreds of tubes of acrylic paint were arranged in perfectly neat rows, like those army parades you see in footage from North Korea. Every brush was spotlessly clean and standing to attention in a glass jar. Here, clearly, was an 84-year-old artist determined not to waste a second that was left to him. The studio was as ready to go as an Olympic sprinter in the blocks.

That, then, is one kind of workplace: neat and minutely organised. I bet Vermeer’s studio was like that. Or the studio of Ingres. It’s an arrangement that fills me with respect and admiration. But, hand on heart, it is not the kind of studio that sends the pulse racing. For that to happen you need mess.

A classic example is Francis Bacon’s germ-filled and chaotic work room, which we’ll come to in a moment when we visit The Artist’s Studio, the new show at the Whitechapel Gallery. I never made it into Bacon’s abattoir, but I came close when I interviewed Louise Bourgeois in her profoundly disordered studio/home in Greenwich Village. 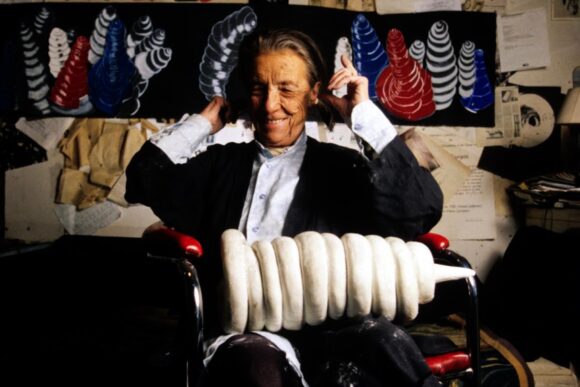 Bourgeois was in her eighties. Every inch of her tall, thin brownstone was packed with drawings, manikins, plaster casts, reams and reams of cloth and materials. If a cat died somewhere in the clutter you would never have found it. Had she not been an artist — one of the greatest the world has seen, I think — social services would have been called in to put her in a home. But that’s the thing about studios: they are not part of the “normal” world.

It’s a point that keeps being made by the Whitechapel’s appropriately chaotic event. Looking back on a century of artist’s studios, from 1920 to 2020, this crowded, throbbing parade has evidently had serious difficulty managing its subject. As a show it’s all over the place. Some of this chaos comes with the territory. But not all. Some is down to contemporary overthinking.

What they seek to present us with here — it’s announced in the opening wall texts — is the studio not just as a private place of work, but also as a public domain. We will be visiting not only the places where artists make art but also the ways in which they present themselves to the public. These are two reasonable ambitions. Each would make a reasonable show. But they are not the same ambition, and the divide between them keeps derailing this event.

We begin with a moody Bourgeois sculpture, one of her atmospheric cages, inside which two marble carvings of the artist’s hands sit atop a roughly hewn altar, surrounded by mirrors. As an artistic statement — a tribute to the artist’s hands — it’s powerful and resonant. But to feel these powerful meanings you need to concentrate on the hands and forget the studio. 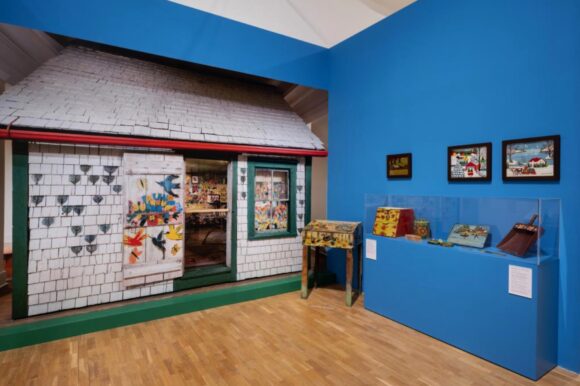 The busy journey ahead — 80 artists! — is packed with such detours. For every tangible evocation of a studio, like the grubby but fascinating recreation of the pictorial compost in which Bacon worked, there are intrusions of a different kind of subject matter. The Nigerian artist Rotimi Fani-Kayode takes subfusc homoerotic photographs styled deliberately on Caravaggio. They’re beautiful. But they say nothing tangible about artist’s studios. The Egyptian painter Inji Efflatoun stares soulfully at us from a self-portrait. It’s nice to discover her. But the image clearly belongs in a self-portrait show.

As the display bounces between its confusing ambitions we keep getting glimpses of artist’s studios and then having them taken away. It’s the sort of problem that regularly afflicts contemporary theme shows. In their urge to get away from traditional, one-directional, masculinist tellings of a story, they end up saying nothing solid.

Here, though, it needs also to be admitted that the studio of today is not what it used to be. The cost of urban hire has turned them into expensive luxuries. And modern methods of communication have done away with much of the need for fixed art spaces. The old idea of a sacred locus in which artists could work their magic has been replaced by a shifting reality where artists plan their art on portable workstations and travel the world with their MacBook Airs.

The Artist’s Studio makes a point of noticing these changes. Indeed, it is as much a celebration of them as a record of the old ways. I find that sad. Others will not.