I have no concrete idea how I ended up in Ukraine last week seeing how the nation’s art and treasures are being saved from Russian bombs. All gods move in mysterious ways, but the gods of art are especially fickle.

It started a fortnight ago with a meeting in London of ten of Poland’s most important museum directors. They had come over to discover why British culture appeared to be so uninterested in Polish culture. They told me their story, and I was asked about mine. So I told them. 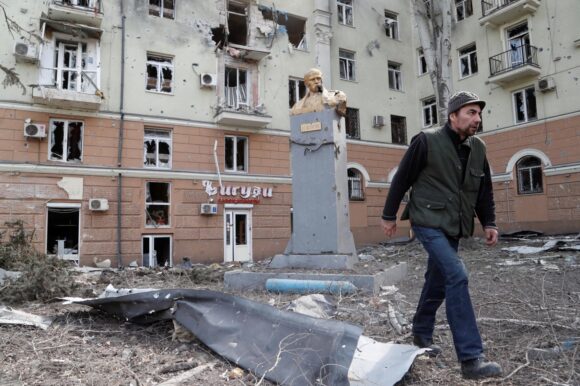 How my mother was born in Ukraine in what were then Polish lands. How in 1939 the Russians invaded and put her on a cattle truck to Siberia. She was 16. How, when the Russians turned against the Nazis two years later, they opened up the labour camps and she walked from Siberia to the Middle East with hundreds of thousands of other newly freed Poles. How she fetched up in England. And had me. How art was my way of seeing light at the end of the tunnel.

When she was 60, I fixed it for my mother to swap her tatty “stranger’s papers” for a proper British passport, and took her back to the Ukrainian village of Lipica Dolna where she was born, some 60 miles from Lviv. The house was still there: big in her thoughts, tiny in reality. We went to Lviv, too, visited the cathedral, visited the museums. And we sobbed our eyes out together under the statue of Adam Mickiewicz, Poland’s national poet. So for me, Ukraine was personal. 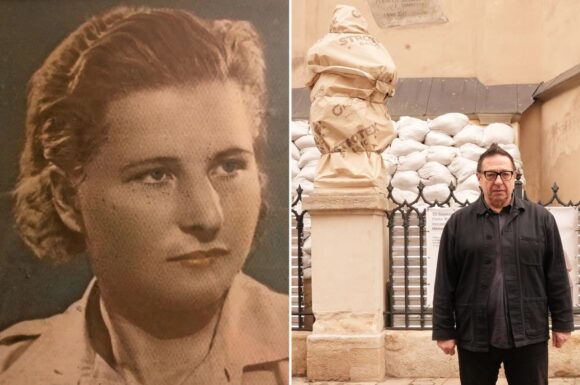 Spilling all this to the Polish museum directors was causing me to tear up pathetically, so, in an effort to distract myself from me, I asked if they knew what was happening to Ukraine’s art and to Lviv’s museums? Were they safe?

They’re being looked after, piped up the director of the National Museum in Poznan, Tomasz Lecki. A couple of weeks earlier he had driven a five-tonne truck to Ukraine filled with the most precious material a museum needs in times of war — bubble wrap. The Ukrainians were hiding their art. They’d run out of packing materials. The Polish museums were resupplying them.

You can go and see for yourself, he added. I suppose I can, I whispered back, wishing I was as evidently Polish and brave as he was. That must be when the gods of art got involved. Because the next thing I know, Tomasz and Marta de Zuniga, the unstoppable life force from the Polish Cultural Institute who organised the event, are jointly planning my journey. 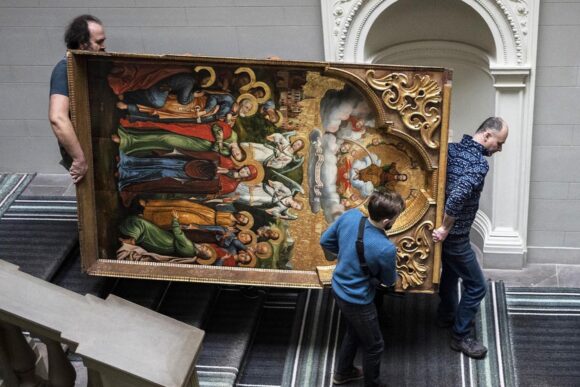 Lviv is 45 miles from the Polish border. Driving there in the dark we pass regular checkpoints, chicanes made of sandbags, flanked by homemade tank traps that look like giant metal sea urchins. The people from the Polish consulate in Lviv, who had met us at the border and got us through, tell us not to film any Ukrainian soldiers. They might shoot us.

On the drive to Lviv, giant billboards keep looming up in the dark emblazoned with stirring Slavic calls to arms. “Be ready to join the army and save Ukraine,” says a prosaic one. “Our enemies fade away, like dew in the sunshine,” says a poetic one. “Russian war ships, f*** you!” says one with a clear Slavic ambition to get to the point. Every few miles, these rousing national addresses pop up out of nowhere, like stage whispers from the gods.

Lviv is exactly as I remembered it. Such a beautiful city. Cobbled and gothic, the streets untouched by yellow lines, the architecture with a fairy-tale mood to it that you just don’t get west of Berlin. We visit the Lviv National Art Gallery, the largest museum in Ukraine. Rumour has it that all the nation’s important art treasures have been sent to Lviv for safekeeping. So where are they? 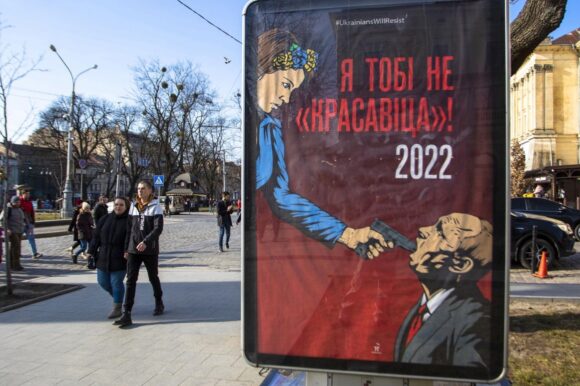 Throughout its entire history Ukraine has been a motorway for anyone heading west or east in Europe. Whether you’re Napoleon marching on Moscow or the Golden Horde riding to Berlin, you pass through Ukraine. And all these cultures — Scythians, Tatars, Germans, Russians, Poles, French — have left their mark on the local art. The result is a wild mix of styles and influences that make Ukrainian art spectacularly varied. Now it is all under threat.

The museum in Lviv is next door to a refugee relief centre where busy volunteers hand out packages to the lucky few waving the correct ticket at them. You register online. Get a QR code in return. Wait your turn. Then pick up your package from counters scattered about the city. It’s how western aid is being distributed in Ukraine. The Argos way.

Inside the museum it’s dark and melancholy. An art gallery without anything on the walls is a lonely place. Most of the pictures have been taken down. A few modest examples remain, but the important ones have all been hidden. No one will tell me where. Least of all the director here, a pocket-sized Tatar dynamo called Taras Voznyak, who meets me in his office.

Voznyak is a card. He starts off by complaining about the Russian fighting forces being sent to Ukraine. They’re young idiots, he says dismissively. They don’t know what they’re doing. Especially when compared with hardened veterans like him and Lecki; men who know how to use a gun. “Old heroes,” I quip. “Middle-aged heroes,” he hisses back with a crooked Tatar smile.

Propped up on his cupboard is a 19th-century painting of an earlier Ukrainian war showing a mounted Chechen waving the decapitated head of a Russian at us. “It pleases me,” he answers when I ask him why he’s put it there. Not in a million years can I imagine the director of Tate Britain or the National Portrait Gallery being as up for a scrap as Voznyak. Same job. Completely different species. 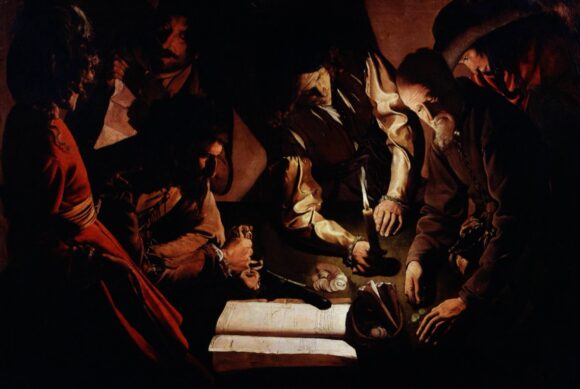 I tell him that the picture I remember best in his museum, the one I enjoyed most on my visit with my mother, was The Money Changersby Georges de la Tour, which shows a mysterious financial transaction set in gripping baroque darkness. De la Tours are rare. The Money Changers is one of his masterpieces. Can I see it? No. It’s hidden. And no, he won’t tell me if all of Ukraine’s art treasures are now in Lviv. It’s a state secret. What he can show me is where the de la Tour used to hang.

So we march through the darkened museum to a faded wall on which a shadow of the great painting is still visible on the wallpaper. And the two of us stand in front of the empty spot in silence, two middle-aged art lovers, struck simultaneously with sadness.

On the way back, an air raid siren starts up. Voznyak ignores it and takes me, instead, into the museum garden to show me his sandbags. Don’t write about anything you see in the museum and its basements, he twinkles.

He is annoyed that people in the West seem to have forgotten that the war with the Russians started in 2014 with the invasion of Crimea. The present fight is just the latest episode. So Ukraine has had plenty of time to prepare plans and regulations for moving its national art to safety. Yes, many of the art treasures from Kyiv, Kharkiv and Dnipro have come to Lviv. But many are hidden elsewhere. Where the Russians won’t find them. 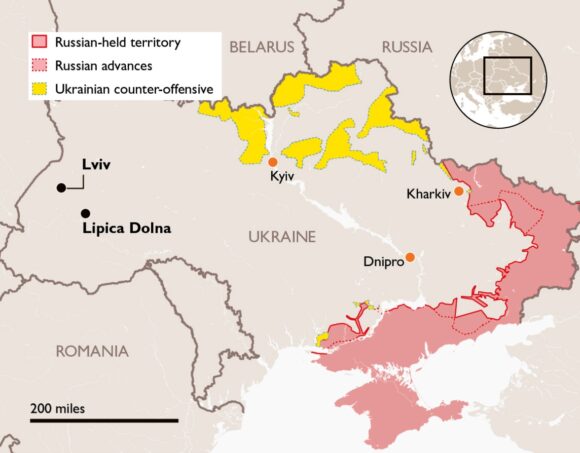 Outside the gallery, it’s lunchtime. Time to take a stroll through beautiful Lviv. Across the city, various windows of various public buildings have been boarded up. The stained glass of the cathedral, where I took my mum, has been wrapped in shiny protective sheets. The statues surrounding the church look as if they’ve been bandaged up by a doctor. That’s where the bubble wrap went.

Everywhere you look there’s the Ukrainian flag, with its Van Gogh colours of sky blue and corn yellow, such a catchy design, playing such a crucial role in rousing the populace. Every flag is a shortcut to the issue, an immediate visual reminder of what Ukrainians are living through. It’s the power of art.

Lviv’s magnificent opera house has become a poster site for heroic imagery. Those people waving flags at us from a tiny speck of land in the Black Sea are the defenders of Snake Island who on the first day of the invasion famously refused to surrender to Russian warships. Another poster shows a pale figure in a pilot uniform they call “the Ghost of Kyiv”, the legendary Ukrainian fighter pilot who is rumoured to have brought down 48 Russian planes since the war began. Some believe he exists. Others do not. Either way, the Ghost of Kyiv is doing his bit to inspire his people. 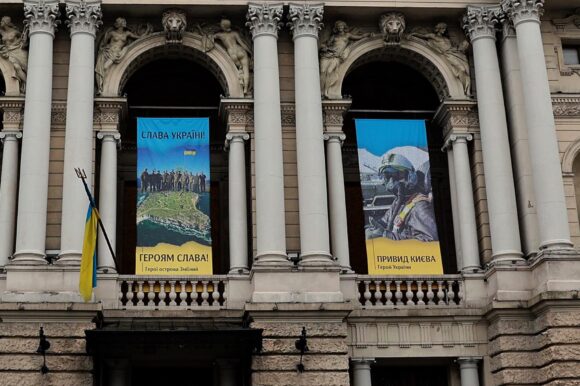 So, of course, is Ukrainian art. It’s what art does in times of war. It rallies the national spirit and focuses it. That’s why the entire collection of our own National Gallery was moved to safety in a cave in Wales during the Second World War. It’s why Henry Moore stopped carving modernist Madonnas during the Blitz and began drawing huddled survivors hiding from the bombs in the tunnels of the London Underground. When things grow dark, art gets real. And it suddenly matters more.

Back at the museum, Voznyak introduces me to two artists who fled last month from Kyiv and are now living at the museum. I’ve heard of artists in residence before. But they don’t actually live on site like Vlada Ralko and Volodymyr Budnikov, who have moved into an unused gallery with a huge bed and a cat. All day long they sit in their patched-up bedroom making art about the conflict. 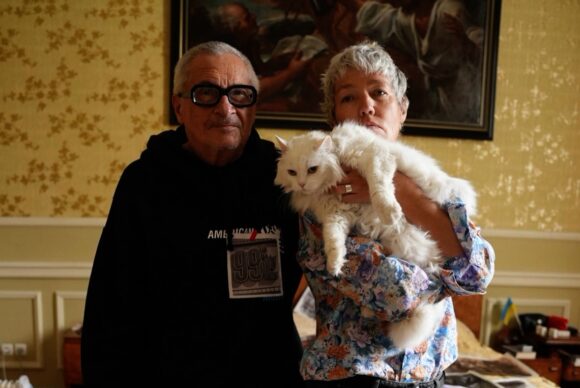 Budnikov is usually an abstract artist, he insists. Now he’s painting skeletons, bombs, mutations, explosions. Putin has done terrible things, I mutter in sympathy. Not Putin, he snarls back. All Russians. They’re not human. This is what they do.

Voznyak reappears. He has organised a car that’s going to drive us out of Lviv to a secret store where the museum keeps some of its art in a disused monastery. I can go and see it. We drive for an hour and a half, and eventually arrive at a crumbling clerical prison surrounded by a high wall. It’s late. The formidable Ukrainian woman who runs the outpost frogmarches me through corridor after corridor packed to the rafters with icons thrown away by the Soviet soldiers when they annexed Ukraine in 1939. Thousands of them. Upstairs, I’m led through another never-ending hoard of baroque church sculptures, enough to fill ten normal museums. This, she waves, is a fraction of what they have.

The next morning, back in the city, I finally get to meet the Polish consul Eliza Dzwonkiewicz, the only foreign consul left in Lviv. The rest have gone. So have all the ambassadors in Kyiv except the one from Poland and the papal nuncio from the Vatican.

Dzwonkiewicz takes us for coffee in the town, dressed in what looks like snazzy urban sportswear, with only the Polish consulate badge on her arm confirming her rank. When the war broke out, she explains, she had these outfits specifically made for the consular staff. War is not a time for decorative diplomat wear.

I take a final stroll around Lviv’s beautiful central square. “This is our land. We won’t give it up,” says one blue-and-gold billboard. “Don’t run away. Defend,” urges another. On a particularly striking poster, a huge expanse of red represents Russia, while a tiny patch of yellow represents Ukraine. “David and Goliath,” shouts the text. “Remember What Happened.”