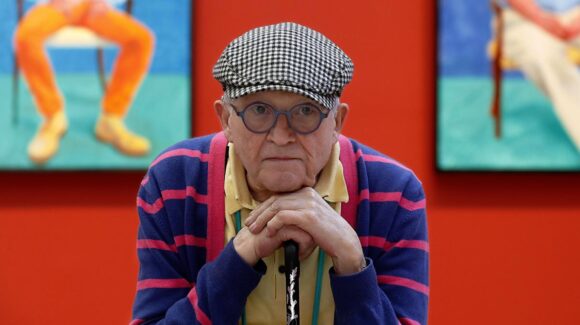 What you are about to read could be one of two things. First, it could be a true account of a visit I have just made to David Hockney’s house in Normandy, where he is preparing for an exhibition in Cambridge devoted to the crucial artistic topic of “depiction” — the difference between what artists see and what cameras record. Second, I may have imagined the whole thing. And this is a description of a weird daydream prompted by the unalloyed grimness of events in the real world. You decide.

It started when I went down a hole in the ground and emerged somewhere else. One moment I was driving through Kent, towards Folkestone, where it was raining, foggy, slushing, grey and cold. The next I was coming out of a tunnel near Calais where the sun was shining, the sea was sparkling a beautiful aquamarine and my car radio had miraculously untuned itself from Nick Robinson talking about women and children fleeing Ukraine and had tuned, instead, to a station devoted to mellifluous French jazz.

After three hours of jazzy driving I reached a woody lane that felt as if it led somewhere mysterious. Both banks were thick with moss on which primroses were blooming. I drove down the yellow road until I reached a wooden gate. It was so tall you could not see over it. I rang the bell and the gate began to slide open, like the curtain going up at the theatre. And there before me was an impossibly pretty cottage, striped a humbug black and white, surrounded by Teletubby lawns, a dinky little pond and a delightful array of fruit trees, on one of which perched a tree house.

I honked the horn and the cottage door creaked open. I was expecting Hansel or Gretel to emerge. But no, it was a chap called Jonathan who does the printing and photography for David Hockney, and who led me into a low and cosy sitting room where, sitting by a huge stone fireplace, was the cheeky leprechaun himself: eager, smiling, spectacularly costumed.

Most leprechauns wear green. Hockney was decked out in a mustard yellow suit that I recognised from the cover of his catalogue for the forthcoming Cambridge show. He accessorised it with white booties, a white shirt and an op art tie in the style of Bridget Riley. And looked fabulous. It’s not actually the same yellow suit, he corrects me. The one on the cover had red squares in the check. A tailor in nearby Caen cut them both. I tell him that his Cambridge get-up — flat cap, brush in one hand, fag in the other — made him look like the comic-strip character Andy Capp. He likes the thought, and chuckles the first of many Hockney chuckles.

Do I eat black pudding? Of course! They were going to serve foie gras for lunch but worried in case . . . well, you know how it is these days. Elise, the queen of the Hockney pantry, comes in with plates of thinly sliced black pudding served on beds of tarte tatin, made with apples from the garden. A spectacularly tasty ensemble.

“I’ve hardly any cholesterol in me,” he announces proudly as we top off the black pudding with bowls of delicious îles flottantes. “I live on cream, butter, milk, everything.” And with that he lights the first of many Davidoff cigarettes that he taps from a square packet that sits snugly in his Caen suit — so snugly I suspect he may have had the pockets specially measured. 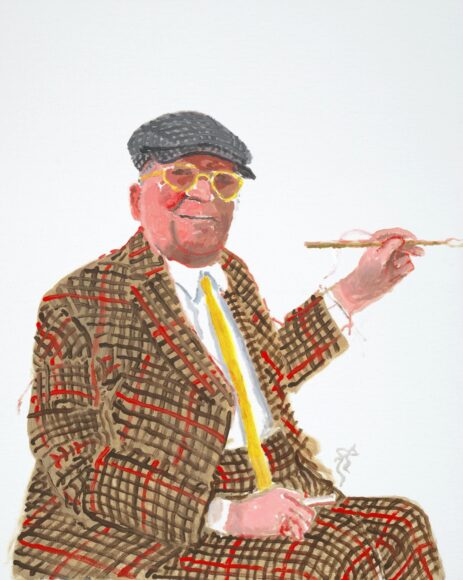 Lunch over, we head to the studio. It was fashioned out of an old barn that used to house a cider press. Jean-Pierre Gonçalves de Lima — JP to all and sundry — Hockney’s companion, studio assistant, right-hand man, left-hand man, tells me it took just three months to finish, during which he lost an impressive 18kg in weight, so stressful was the conversion. I have been to a fair few artist’s studios in my time, but none that felt as ready for action as this one. Tubes of paint, hundreds of them, arranged in perfect ranks like taxonomic specimens. All the brushes, perfectly cleaned, standing to attention in glass pots. Packed into the wall space new art: still lifes of flowers, views of the garden, portraits of passing friends.

Hockney has never been busier. Since he moved to Normandy in 2018 he has had a big show in Amsterdam with Van Gogh (“Dave and Vince,” JP quips). Then there was the event in Paris with Monet (“Dave and Claude”). And the still lifes are off to the Matisse Museum in Nice in the summer (“Dave and Henry”). We, however, are here to talk about the show in Cambridge. The one that obsesses about depiction.

In 2006 he published a book called Secret Knowledge that proposed that from the early years of the Renaissance artists have used lenses and cameras to help them to make their work. (It’s the one where he looks like “a lesbian novelist” on the cover: his description, not mine). According to Hockney, Vermeer and Ingres worked with gadgets such as the camera lucida and the Claude glass to make their art.

In Cambridge, at the Fitzwilliam Museum and the Heong Gallery in Downing College, he will be expanding on these controversial ideas and paralleling his own experiments in optics with those of the old masters. In particular he wants to examine the role played in art by shadows. Shadows? 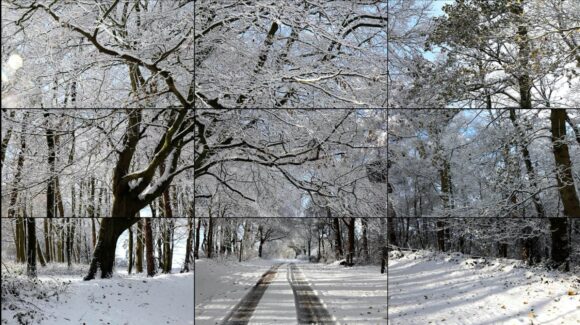 Have I read the letter he wrote to The Art Newspaper about a book called Beyond Abstraction? Yes, I did read it, but . . . “I pointed out that abstraction was only needed in Europe to take away the shadows. Chinese art, Japanese art, Indian art, Persian art, never has shadows. Only European art has shadows. Why? Because photography needed shadows, didn’t it?”

I’m already lost. So he indicates the studio wall where the new still lifes of flowers are hanging in thick wooden frames. Did I notice the shadows? No, not until he mentioned it. That’s because you are looking at the pictures, he explains, not at the shadows they cast. Photography, however, and this is the problem with it, always notices the shadows. And once artists began using photography and lenses to help them to make art, shadows began to affect the artist’s vision and distort it.

To make it clearer he tells me a little story. “When the Jesuits got to China, they quickly learnt Mandarin. And one of them painted a portrait of the empress. And she famously said, ‘I can assure you the left side of my face is the same colour as the right side of my face.’ He’d painted a shadow in because he thought that was ordinary. But it’s not ordinary in Chinese art, is it? 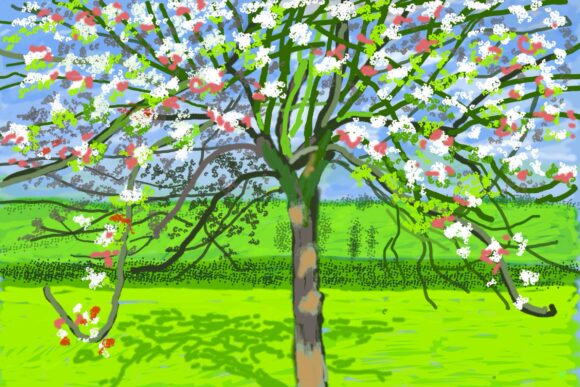 “When Hokusai was drawing his bridges, there’s no shadows under those bridges. And they’re not missed. You don’t suddenly think, ‘There’s something funny here, there’s no shadow.’ Most people don’t even notice. They just see it as a beautiful picture.”

All this is tricky optical information. To illuminate it he begins opening various books filled with examples. The first unfolds like a Chinese scroll and uses his paintings of the Normandy garden to follow nature’s journey through the seasons from one winter to the next. Four seasons in one image. You couldn’t do that with a photograph.

Another huge tome, brought out recently by Taschen, contains 220 drawings done in 2020, each recording a different corner of the garden. I pause before an especially beautiful close-up of some leaves that have fallen to the ground. “That’s a good one. Dead leaves in a still life. When science says, ‘We must do this, that and the other,’ I have to point out that some leaves fall off the tree faster than others. And it will always be that way. Like people. Some die earlier, some die later.”

His own experiments in photography — some of which will be on show in Cambridge — were an attempt to infuse the photographic snap with the spirit of drawing by using collage techniques and panoramic formats. As for mobile phones, he’s with David Bailey: “The iPhone ruined the camera. They are so flat.” With that he taps out another Davidoff from the packet he keeps in the special pocket of his yellow checked suit, lights it and puffs a happy puff. “I don’t know why they’re going on about me smoking. I mean I’m 84 now.”

In a few weeks he will be returning to Los Angeles for a brief visit because of his green card. But this is home now. This is where he’s going to stay. It’s so quiet. So secluded. So few people come to visit. He can get on with the work.

It sounds like a cue. So I get back in the car and drive back to the hole. When I emerge in Folkestone the rain is coming down in diagonal lines, and the women on the radio are still fleeing Ukraine.

Hockney’s Eye: The Art and Technology of Depiction, at the Fitzwilliam Museum and the Heong Gallery, Cambridge, until Aug 29