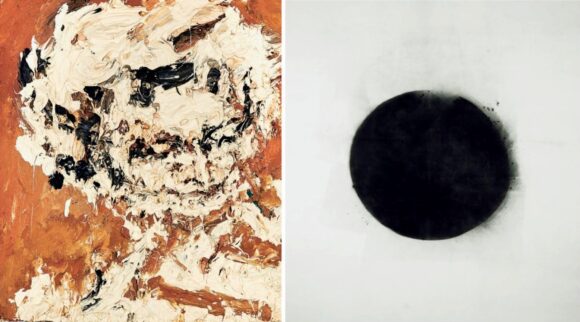 A couple of weeks ago events in the real world would not have felt like an especially pertinent frame for events in the art world. But today they do. At least they do at the Barbican Art Gallery where Postwar Modern: New Art in Britain 1945-1965 rubs our noses in the moods and textures of war and its aftermath.

The show looks back at a notoriously glum epoch in British art. The postwar years were, in themselves, a war of sorts. The nation was fighting to pick itself up, to scrape the blood off its boots and forget what had happened. The big point being made here is that all this soaked into the art, and made it as bleak and legible as evidence in a courtroom.

You would be hard-pressed to find a doomier piece of atmosphere-setting than the opening room of the Barbican’s misery fest. The first artists we see — Eduardo Paolozzi, John Latham, FN Souza — work exclusively in black and seem determined to drag us with them as they descend into a pit of despair.

Paolozzi gives us a set of vaporised heads, survivors of Hiroshima, perhaps, with fuzzes and blotches where their features should be. Latham, in a huge and powerful picture called Full Stop, confronts us with a looming black circle — a negative sun, a black hole? — which has begun to blur at the edges as if in the early stages of disintegration. Souza, a Catholic Indian originally from Goa, paints a black 1950s Christ whose spiteful and angry stare picks us out like the beam from a searchlight. “What have I done?” you ask. “All this,” he snaps.

It’s harsh art and definitely not work that can be whipped out for every occasion. The Tate has owned the great Latham since 2005 but I do not remember ever seeing it on show. They keep it locked away. Souza, with his ugly mix of Catholic guilt and cartoonish overemphasis, is an artist I have never rated, and never will, but if ever there was a moment for him, this is it.

With the mood firmly set, the exhibition enlarges its search area and goes poking about in different corners of postwar Britain. A section called Post-Atomic Garden looks at how the broken and ruined city left by the bombs turned into an eerie new landscape in which weird mutations could flourish. The Fisheater, a pterodactyl lookalike welded from iron and copper by Lynn Chadwick in 1951, looms over the space like a scary skeleton at the Natural History Museum. Elizabeth Frink’s Harbinger Birds are creepy mini-ostriches, cast in bronze, which stride angrily about their display case, looking for something to peck.

As the Hiroshima-mood enlarges and spreads, the mutated animals are joined in the post-atomic garden by robo-humans haphazardly constructed from broken machines and shrapnel. Paolozzi’s horrible mutations have a feral mood to them: humanity adapted to the junkyard. You can imagine them driving the cars in a Mad Max movie. When it comes to foreseeing a postapocalyptic world, the past seems to have put on the same glasses as the present. 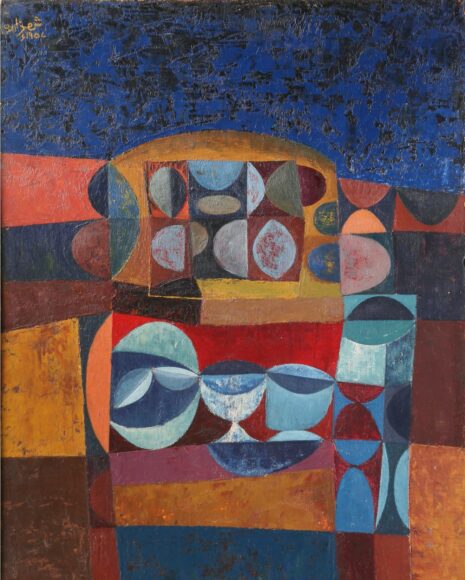 Turning bad art into good shows is a Barbican speciality. The evidence here of a collapse in national aesthetics is indisputable, and no amount of clever contextualisation can change that. But the point made recurrently by the show’s opening stretches — dark times spawn dark art — is made so fiercely that even the worst aesthetic moments cannot be blamed entirely on the artists. The times did it, guv. Honest.

Thankfully the route forwards is chronological and as we progress through the 1950s colour begins to sprout again in British art like buddleia on a bombsite. One of the show’s obvious ambitions is to rediscover the forgotten women of the time and Magda Cordell, a Hungarian transplanted to London, is the first rousing colourist we encounter — albeit with what looks like a giant cow’s heart crucified bloodily against a screaming purple sky.

Having successfully painted a big historical picture, the exhibition picks up pace when it starts zooming in on smaller stories. A section devoted to Jean and John Bratby, both artists, takes us inside their home, where the domestic misery of postwar Britain is made spectacularly evident.

Bratby, a violent drunk, splashes away at messy portrayals of himself while his wife — the better artist — peers into the mirror after one of his assaults and sees a black eye, a mad stare and a face disfigured with rage. Jean Bratby is a significant rediscovery. Mad Self-portrait is, I reckon, one of the signature artworks of the epoch. John Bratby, meanwhile, paints her sitting naked in the kitchen where he compares her to a tableload of groceries. You want to lean over into the 1950s and smack him. 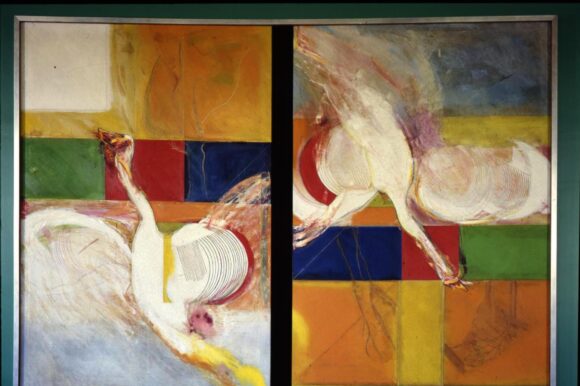 Another strange artistic marriage between the influential art critic Laurence Alloway and the artist Sylvia Sleigh results in two hilarious portraits of the critic dressed in full trans splendour as an archetypal Renaissance bride in a white wedding dress. Art critics, what has happened to us? When did we stop going to work in our wedding dresses?

The show’s recurring emphasis on the impact of transplanted foreigners on British art, brought here by the winds of war, means Lucian Freud makes a compulsory appearance with a cluster of delicately spooky portraits of his first two wives. And in the downstairs portion of the journey the smart decision to leave most of the Barbican’s brutalist architecture showing successfully amplifies the misery. Upstairs, in the Barbican bullring, the thread gets lost a bit while we bounce from alcove to alcove. As the 1950s turn into the 1960s, and we strobe from full-on gloom to conditions that let in some light, the sights we encounter appear chiefly to depend on pot luck.

A Cruise section looks at Francis Bacon and David Hockney, two gay artists making proselytising art at a time when homosexuality was illegal. A display case devoted to the studio pottery craze shows Lucie Rie and Hans Coper crafting exquisitely precise pots in their trademark 1950s beige. Frank Auerbach and Leon Kossoff swell the ranks of the transplanted foreigners with dank urban scenes in which the paint mimics the textures of the earth at a bombsite.

So it’s a bleak show. Masterfully curated. Supposedly about the past. But with much to say to the present.

Postwar Modern is at the Barbican Art Gallery, London EC2, until Jun 26