Tracey Emin is in bed. In her pyjamas. Hair messy. Buttons open. But I’m happy to confirm that her current bed doesn’t look anything like the one portrayed in her famous Turner prize artwork My Bed. That bed, you will remember, had condoms, fag packets, dirty underwear, vodka bottles and a suspicious assortment of crumpled tissues scattered around it. The whole of Leicester Square appeared to have slept in it.

That, though, was the 1998 version of Emin. Today’s version reclines in a bed the size of a small football pitch. And from the glimpses I get of it, looming up around the edges of our Zoom call, I can see that it is as spotless and white as a fresh fall of snow. Princesses in fairytales take scruffier kips than today’s Tracey Emin.

She’s in her pyjamas because of jet lag. She has just got back from Thailand, where she spent a fortnight with her pal Cecily. The two of them lived “like nuns in a villa” as they stocked up on vitamin D. “We drank tea, we read, we swam and we ate Thai food all the time. I didn’t leave the villa once.” 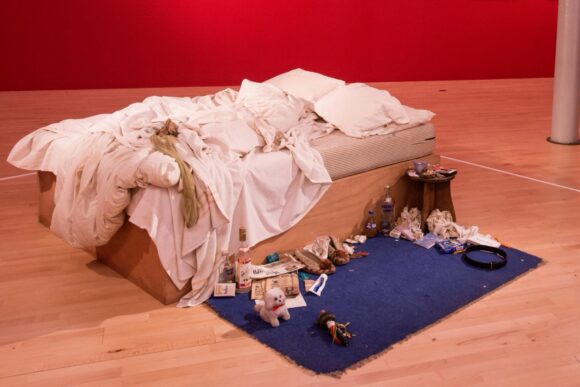 And not a drop of alcohol passed her lips. Instead, she grins, with that piratical grin that proclaims her Romany origins, “my big thing was mango sticky rice. That’s what I OD’d on.”

The trip to Phuket was her first holiday for 11 years. She needed it because her London neighbours have been digging up their basement and she could no longer face the drilling that started up every morning at eight. But there was obviously more to it than that.

In 2020 she was diagnosed with cancer and had to have her bladder and womb removed. They also took out her urethra, part of her intestines and “half my vagina”. Thankfully the operation was a success and recent tests have shown her to be clear. But you don’t go into a tunnel like that and come out the other side as the same person.

As she talks I get the feeling there was more riding on the trip to Thailand than a pause from the noise and a top-up of vitamins. With all she has been through, I reckon Emin needed a full reset. “About five or six weeks ago I just completely cracked up. I just went ballistic. I was crying. I nearly burnt my house down. I couldn’t take it any more,” she lists with Eminesque directness.

On social media, alongside a photo of herself flying to Phuket, she explained the journey with a trademark mix of the shallow and the deep: “All I want to do is finish Elton [John]’s book, swim, do some watercolours, and decide how to live after being so close to death. I desire to be part of this world.”

When I read that beautiful line — “I desire to be part of this world” — it stabbed me in the heart. Poor, poor Tracey. For two years she has been living alone in her own dark landscape. Now she’s coming back into ours.

Another bit of good news is that the drilling London neighbours don’t matter any more because she has decamped to her home town of Margate, to a new house and a new bed at the centre of the new Tracey Emin empire, where everything seems to be tickety-boo.

In recent years Margate has transformed itself from a beachside ghost town into Britain’s most happening place. Every artist, poet, musician, upholsterer, carpenter and all-purpose creative in the country appears to have moved there. The wags call it “Shoreditch on Sea”. And a big reason for the transformation is Emin’s return.

That leaves her free to do the next big thing she wants to tell me about. Which is — cue the trumpets, roll the drums — open her own art school in Margate.

Open her own art school in Margate!

She’s calling it TKE Studios, after Tracey Karima Emin. The Karima bit, which I hadn’t heard before, is her middle name. It has Arabic roots and translates from Turkish as “to my wife”. Her Turkish Cypriot dad gave it to her.

She later texts me to explain that “Tracey” wasn’t her mum’s idea or her dad’s. When she was born her Romany mother called her Pebble and her twin brother was Django. However, the nurses talked her out of it, saying the children would be ridiculed. So for the first few days in hospital she and her brother, Paul, were just Cashin 1 and Cashin 2, after her mother’s maiden name.

But hang on, Pebble. We’ve drifted on to identity issues here, which is fine, and absolutely of the moment. But you have just dropped a bombshell about the Tracey Karima Emin art school. What’s that?

A few weeks ago a friend in Margate told her about a site, five minutes’ walk from her new studio, that was being sold. Locals called it “the compound”. It was a former bathhouse with a large car park and a mortuary.

“It was for people’s bodies found at sea. Those were the bodies that couldn’t go to the ordinary morgue, for obvious reasons.”

Too decomposed for the normal mortuary? 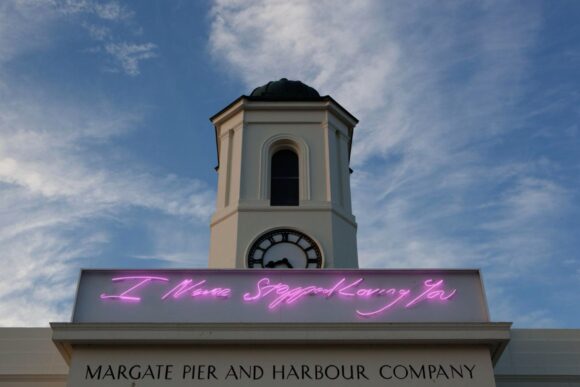 “Yeah, with things crawling out of them, and God knows what else. And they’d have to do a longer autopsy to find who the person was. Anyway, it’s not creepy.” At which point that throaty Emin laugh surges up and out.

The mortuary, she continues, is going to be turned into a “mini museum” filled with her own work. But the rest of the site will become a set of 30 artists’ studios run on revolutionary lines and with revolutionary ambitions to function as a free art school.

“People will have to apply, and there’ll be really strict rules. No sub-letting, no smoking, no loud music. And if people don’t want to do the rules then they won’t have a studio there.

“The other thing, because the rents are going to be so low, I’m not having people having part-time jobs and then never coming in. So, I’m setting it up so they . . . will have time to work and paint.”

The light is great. And the artists will come from a mix of generations — “baby artists, middle artists, older artists” — with the older artists helping the younger ones.

Also, when she was at Maidstone College of Art, they had a regular event called the corridor show, where at 3pm every Thursday students would hang their work in the corridor and people would be invited to look at it. “And that’s what I want to do at the studios. Every now and again someone has to put their work up in the corridor and the others come round and criticise it. So there’s like this constant intellectual rigour. People can’t just be passive.”

All this comes pouring out in a torrent that leaves no time for surprise. Having heard about the compound only a month ago, she decided straight away to buy it. The deal took a week to go through.

At another location she’s planning to open an “artist’s residency scheme”. Artists will move to Margate for three or four months, do a residency and, she hopes, fall in love with the town and decide to stay. “So it’s organically making the place right for the right people. I love art. And I love property. And this way I’m combining both my loves and doing a bit of good.

“You know in life you sort of amble around, and you don’t know what you’re doing, but you know you’re doing something? And then suddenly you see the light. You go, ‘Oh my God, that’s what I’m doing!’ Well, with Margate now, especially after the cancer and everything, it’s all making sense what I’m doing. I am sort of helping. I am making an artist’s haven.”

Yes you are, Karima. You really are.

I own one of Emin’s early works. It’s a townscape showing the Margate beachfront before it became trendy. At the front is the famous Margate clock tower. One day they’ll put up a statue of her right next to it.