Frans Hals: The Male Portrait is at the Wallace Collection, London W1

He’s one of the best known paintings in the world. He pops up, instantly recognised, on biscuit tins, cans of beer and fridge magnets. In the golden age of British comedy Peter Cook and Dudley Moore rarely completed a sketch without dragging him into it. Yet we know surprisingly little about the Laughing Cavalier.

It’s not, of course, his real name. The Victorians dreamt it up in the 1880s when both he and his painter, Frans Hals, became famous. His real name is lost. He’s certainly not a cavalier, because cavaliers were soldiers and horsemen, not bon viveurs posing haughtily in expensive doublets. Most certainly of all, he’s not laughing. In fact, he’s not even smiling. 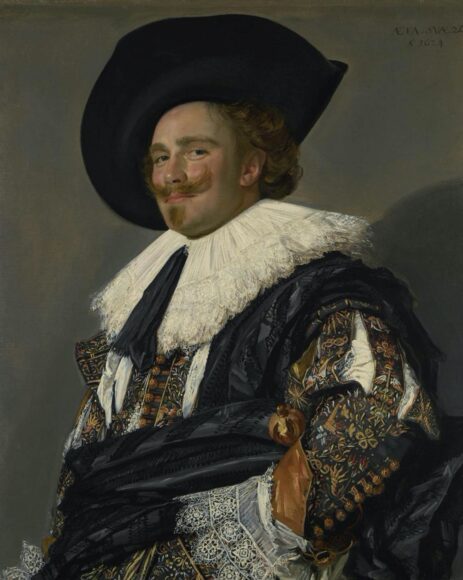 Lots of discussion can be had, and has been had, about the precise nature of this elusive expression. If it were left to me I would have christened him the Cocky Cad because there’s something superior about the way he looks down at us and that irritating spark of humour lighting up his eyes. With most art, you are the one doing the judging. With him, it seems to be the other way round.

When a picture is as celebrated as this it is bad art history to leave it suspended in fogs of doubt, so the Wallace Collection deserves a meaty slap on the back for giving us Frans Hals: The Male Portrait, a riveting display that not only frames the Big Laugher in new ways, but also parades before us a dozen other fascinating male presences from 17th-century Holland recorded for posterity with unusual vividness.

The other day on Twitter someone sent me a picture of me in the pose of the Laughing Cavalier. I downloaded it, printed it and framed it, of course. But it also made me realise how the fame of an image can have a distracting effect. When you’re as celebrated as this, you’re a tick on a bucket list rather than a painting that demands to be looked at.

So among the many good things in this show is the fresh atmosphere that surrounds the celebrated smirker. Suddenly he feels different. By hanging him higher than he usually hangs — next to the Canalettos in the Wallace Collection’s plush central gallery — the show’s organisers seem to have returned him to his rightful angle. He’s meant to look down on us, not the other way round. And because he has been beautifully restored, there’s a new brightness to his colourings, a sense of his paintwork having woken up. The catalogue, meanwhile, bombards us with revealing information.

In particular, the details of his rediscovery in the 19th century feel telling. The 4th Marquess of Hertford, the originator of the Wallace Collection, bought him at auction in Paris in 1865 for an astonishing 51,000 francs — eight times the estimate. The price was so unexpected, so outlandish, it immediately caught the eye of the world’s press. Thus that old fame-maker, money, shone a spotlight on this hitherto unknown smirker. 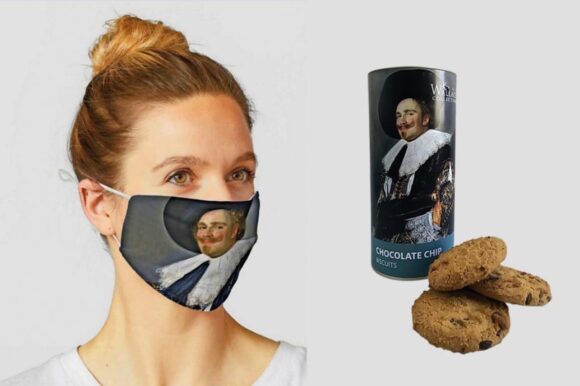 Interestingly, Hals himself was also obscure at the time. No one was yet ranking him among the greatest painters of the Dutch Golden Age, as they do today. But the sudden notoriety of the man in the hat prompted an immediate interest in his maker as well.

The 4th Marquess of Hertford brought his new prize to London, where he was immediately popular, but in clear need of a name. Portrait of a Man is not a title that makes the heart beat faster. Someone mentioned “Cavalier” and it stuck, and when he was shown at the Royal Academy in 1888 the fuzzy feelings people had about him had coalesced into the catchy picture title The Laughing Cavalier. Nothing was true. It was all invented. 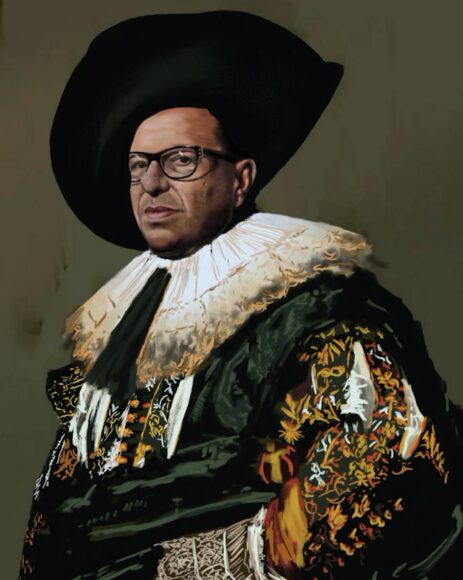 All this makes for fascinating reading and viewing before we move to the next course at the show, the dozen other captivating men painted by Hals between 1610 and 1660, and arranged in a surrounding rectangle like the 12 apostles at the Last Supper.

Hals was an especially skilled painter of men. In his long career — he lived to 84 — he hardly ever left Haarlem. His sitters were invariably local men whom he knew better than most portraitists know their subjects. This intimate knowledge is evident in every brushstroke. Nothing here can be described as a standard portrait in a standard pose.

Hals’s friend Isaac Massa sits half-turned before us on a chair with its back to us, Christine Keeler style. It’s a new position in art, one that brings with it an immediate air of relaxation. 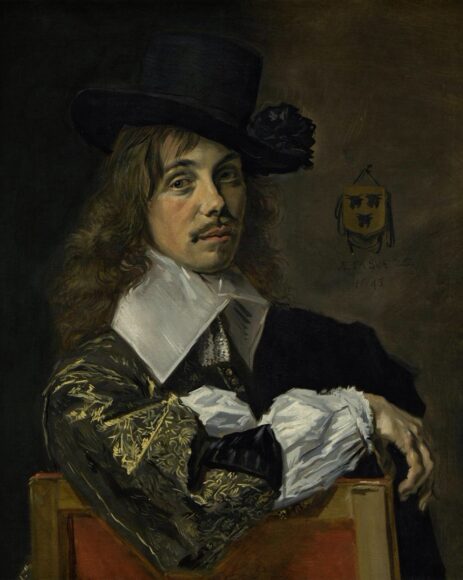 The ship’s captain Pieter van den Broecke grins up from beneath a mess of straggly hair. Most sitters would have run a comb through it before they sat for Hals, but not this beaming seafarer, who was apparently the man who introduced coffee bushes into Europe.

I love the brewer Nicolaes van Voorhout, with his ruddy brewer’s chops and a beer belly that stretches the inappropriate silver satin in which it is sheathed to breaking point. But Hals could do serious too, with an assortment of men in black — burgomasters, lawmakers — providing the opportunity to explore deeper moods and a starker pallet. He was never a Rembrandt, but, when painting someone old and grave, he too could conjure up a presence that feels wise and profound.

All these portraits are arranged chronologically so you can see his touch growing freer and more inventive as the years click over. Hals was rediscovered just in time to influence the impressionists, and in his final moments here the paintwork grows astonishingly loose. At the end of the journey, a couple of posh young chaps in flashy duds swirl in to prove that arrogant young people with money could be just as deserving of a kick in the pants in the 17th century as they are today. 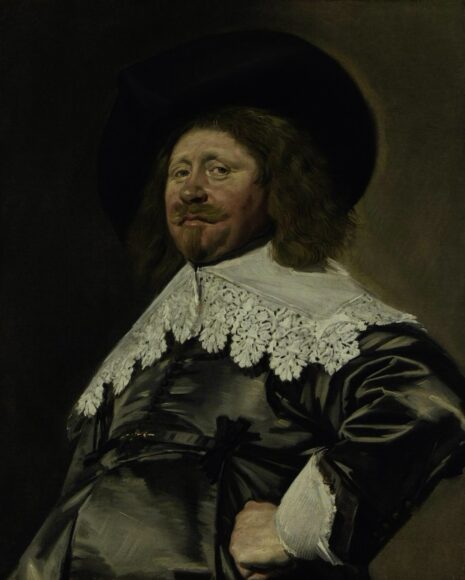 It’s a remarkable range of expressions and types. Every picture feels like a separate event, a sensation enlarged by the roominess of the display and the wacky decision to set the show in a gallery coloured like a Rothko painting, in deep maroons and dark purples. Some will find it an intrusive bit of exhibition design, but I thought it was brave and clever because it brought an air of solemnity to the investigation.

The Laughing Cavalier, a presence whose jolliness has previously been unquestioned, appears here to have gained a sinister air. The upward curl of his moustache feels less smiley, more arrogant. The grabbing eyes grab you more firmly still in one of the fiercest bits of eye-to-eye contact in the whole of art.

In an exhibition that discovers much that is new, the organisers appear to have discovered something rather unpleasant in the Cocky Cad.

Frans Hals: The Male Portrait is at the Wallace Collection, London W1, until Jan 30