Landscape by the war leader could fetch £2.5m at auction next month 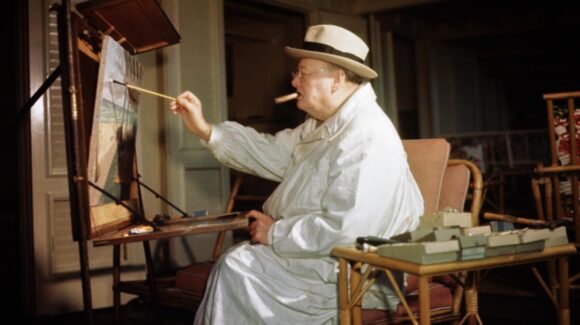 For evidence of how common sense can be destroyed by patriotic emotions you need search no further than the current passion for the art of the third-rate dauber Churchill.

His work would not even have made it past the first round at the Royal Academy Summer Show. Yet he has managed to become an artist whose pictures sell for millions of pounds. Hah!

Last summer a pitifully ordinary view of the Koutoubia Mosque in Morocco which Brad Pitt had given to Angelina Jolie as a love gift, thereby sprinkling it with Hollywood magic, sold at auction in London for £8.3 million.

The pre-sale estimate was between £1.5 million and £2.5 million, which already had me smiling.

By the time the price climbed to its absurd finale I was howling like the laughing policeman on Blackpool Pleasure Beach. How many idiots are there out there?

Given these money storms, it’s hardly surprising that every Churchill painting in the world seems to be heading for auction. Earlier in the summer, the Onassis family put their Churchill up for sale in New York.

Winston had given it to Aristotle as a thank-you for the happy times he had enjoyed on the Onassis yacht, puffing cigar smoke at the opera singer Maria Callas. When it only fetched £1.32 million, the grunts of disappointment could be heard all the way to Athens.

Another one going on sale at Christie’s next month may add a few more noughts. It’s a view of the bridge at Aix en Provence, and it too has an estimate of between £1.5 million and £2.5 million. Like all Churchill’s pictures, it looks like something produced with a Paint By Numbers kit, where over-bright patches of colour are jigsawed into standard outdoor shapes.

Hilariously, the paperwork for the sale compares Churchill with Cézanne, the master of Aix, who painted the same scene in a couple of faded watercolours. It’s a comparison that falls firmly into the pull-the-other-leg school of art criticism. Shame on you, Christie’s!

If art isn’t driving these Churchillian lapses, what is? Relic hunger. There’s always been money in relics. Back in the Middle Ages, people would happily pay a king’s ransom for St Peter’s broken toe-nail or a sliver of the femur of John the Revelator.

At one point there were 18 foreskins of Jesus — they called it the Holy Prepuce — in circulation in the Christian world. No one is that divine.

A few months ago, this same hunger caused some poor numpty in West Sussex to pay £4,200 for a stubbed-out Churchill cigar. Earlier in the year, the great man’s rosewood cigar box went for nearly £80,000.

Adolf Hitler was also a keen artist who studied the subject more determinedly than Churchill and was definitely the better painter. But his auction record is a measly £100,000. So that’s another war Churchill is winning.