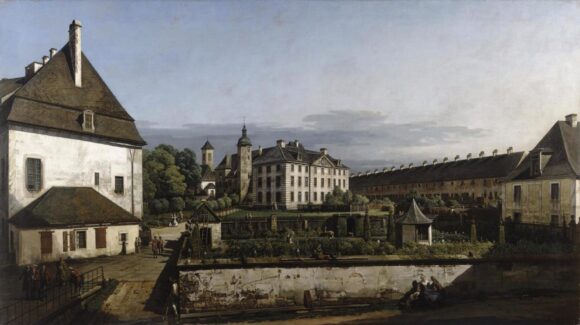 Bernardo Bellotto (1721-80) is an indistinct presence in the annals of art. Some of the haziness is down to his origins, which are simultaneously fruitful and confusing. He was the nephew of the great Canaletto, who was also his teacher and promoter. So that’s fruitful. Where it gets confusing is in telling the two of them apart.

For much of his career, and on many of his travels, Bellotto was actually called “Canaletto”. Sometimes this was expanded to “Il Canalettino”: charming and even helpful if you are trying to position yourself stylistically, but profoundly unhelpful when future generations look back on your work. Where the real Canaletto ended and the faux “Canaletto” began was one of the minor puzzles of the rococo era.

Today that puzzle is in the past. We know what Bellotto achieved and we rate it so highly that in many opinions the nephew outshone the uncle. But nicknames have a way of sticking in art, and I suspect Il Canalettino will never be entirely free of his Venetian shadow.

An exciting display at the National Gallery in London makes clear that all these confusions are undeserved. Bellotto was a very different beast from Canaletto, and the qualities that he brought to 18th-century “view painting” raised it to another level. He pumped the genre so full of new energies that he turned it into something else.

The National show brings us five huge canvases of the same location: the Königstein castle near Dresden. Formerly the royal residence of the elector of Saxony, Königstein is one of those impossible-looking pieces of tottering mountain architecture that someone has somehow managed to perch atop a rocky crag. How did they get it up there?

When Bellotto painted his spectacular views of the schloss — imagine Edinburgh Castle without Edinburgh around it — he was in the service of Augustus III of Saxony, the art-loving German elector whose father was the founder of the Meissen factory at which the secrets of Chinese porcelain were finally cracked. Augustus was a lousy ruler, but as an art patron he was in the top drawer.

Bellotto entered his service in 1747. Working at an unceasing pace knocking out ambitious and spectacular views of the royal city of Dresden, the Venetian-born Bellotto became fully himself in Saxony. He worked on a larger scale than his uncle. His views were more detailed. The weather in them was more closely observed and nuanced.

Having been trained to excel at water, he was predictably keen to feature the Elbe River, which flows through Dresden. But something else that feels Venetian in his work is his taste for ruined walls and crumbling surfaces: that sense of romantic decay in which the Serenissima is pickled. When Bellotto left for Germany he took it with him.

The commission to paint Königstein came in 1756. It seems the original proposal was to paint seven views of the stone eyrie, but only five were finished. They have now been brought together for the first time in 250 years. One belongs to the National Gallery. Two have come from Manchester Art Gallery. A fourth has been lent by the Earl of Derby. And the fifth has travelled from the National Gallery of Art in Washington DC, having been sold at Sotheby’s in 1991.

How did they reach England? No one knows for certain. But they must have constituted some sort of war booty. In 1756 the Prussians overran Saxony in the opening skirmishes of the Seven Years’ War. Augustus III took refuge in Königstein before fleeing to Poland, where he was also king. In these confused and troubled circumstances Bellotto’s castle pictures were painted and scattered. Perhaps some of the heft of this outstanding series, the powerful sense of a bigger storyline lurking beneath the trees, is a legacy of these difficult origins.

Each of the five views is nearly 8ft wide and more than 4ft tall. In an evocative approximation of how the pictures may originally have hung, the show’s curator, the inch-perfect Letizia Treves — who also did the Artemisia Gentileschi show — has arranged them on a pentagonal wall that seems to reach out and hug us closer. The two interior views of the castle hang on the outside of this perfect arrangement, while the more distant ones are in the middle. By the magic of optics this clever choreography makes you feel as if you are inside Königstein, looking out across the castle’s magnificent, airy surrounds. It’s a beautiful set-up that soon had me gulping imaginary lungfuls of fresh Saxon air.

Like his uncle, Bellotto uses the magic of realism to hook us to his art. The left-hand view of a rose garden in the castle courtyard is an astonishing piece of mimicry. The battered wall of the rose garden in the foreground or the crumbling plaster of the house on the left are so convincingly recorded they’ll have you cooing with delight.

As if that weren’t enough, Bellotto adds a second layer of excitement with his lighting. The way the sun blasts the crumbling whites of the plaster, then casts the other half of the courtyard in darkness, adds huge helpings of drama and emotion to the scene. Where Uncle Canaletto gave us a Venice that is always limpid and pretty, Bellotto ranges up and down with his sunlight, like Handel on the organ.

We’re watching the birth of Romanticism: an art that is big, bold, cinematic and moving. The show marks a clear divide as well between the smaller ambitions of the uncle and the bigger emotions of the nephew.