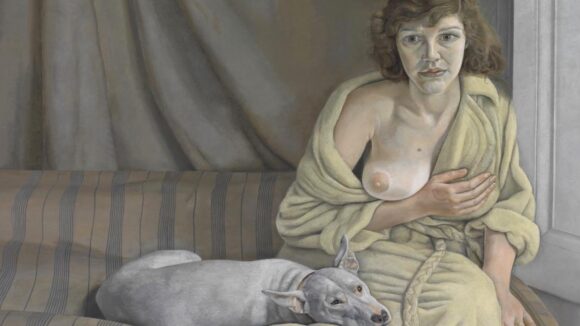 Lucian Freud exhibitions — and there have been a lot of them — usually have a claustrophobic mood. It’s because his paintings are so direct and solid, especially the nudes. Their poses are inelegant and shameless. The flesh, painted with trowel-loads of cremnitz white, seems to push against you. It’s like finding yourself in the middle of a crowd at a German naturist camp. And you’re the only one wearing clothes.

So the first thing to note about the pleasing Freud show that has turned up at Tate Liverpool is the absence of these claustrophobic atmospheres. For once it all feels light and airy. This is Freud with the window open, an artist you can enjoy thoughtfully and peacefully without having floppy testicles slapped against your nostrils or a naked breast thrust in your face. 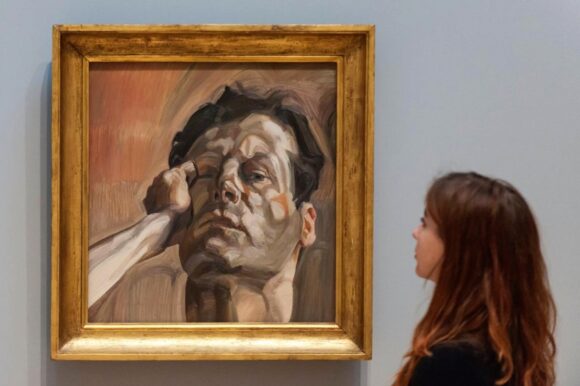 To achieve this pleasing airiness, good curating has been aided by serendipity. Almost everything here comes from the Tate’s own collection, which turns out to be stocked with fine examples of Freud from all stages of his career — but not overstocked. Thus serendipity is responsible for a helpful freeze on the number of exhibits.

The resulting event is both a tribute to the excellence of the Tate’s collecting eye, which has been selecting well since the 1950s, and a relief from those packed Freudian bodyfests of recent years, which kept forcing you to confront the crotches of strangers.

The good curating, meanwhile, has given us a journey with an entertaining and helpful focus. Lucian Freud: Real Lives peeps into the painter’s address book and discovers a gallery of his most intimate sitters: the friends and family who appear most regularly in his art.

As you must know by now, Freud had an adventurous and squalid private life. He was a heartless seducer of younger women. He treated his kids badly. His wives even worse. In the realm of real life it made for harsh psychology and broken trusts. In the realm of art it created a riveting cast of subjects. So that’s what we get here. His mother. His daughters. His studio assistant. His favourite models. A light sprinkling of his many lovers.

The decision to include a generous array of etchings alongside the thin snowfall of paintings is another piece of good curating. Freud was a brilliant and inventive etcher. The technique seemed to quieten him and make him sad. His etched portraits of his family and friends are Rembrandtesque in their thoughtfulness and sense of melancholy. 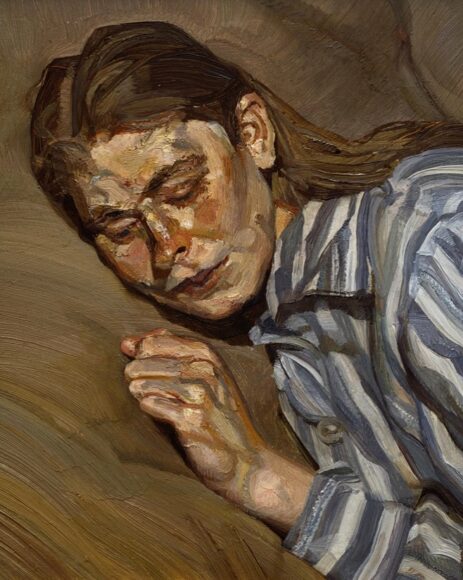 They were made in an inventive fashion too. Most etchers work downwards on a table. Freud put the metal plates on an easel and scratched into them when they were upright. It’s an angle that confronts the sitter face to face and results in portraiture that feels unwavering.

His longtime studio assistant David Dawson — who also pops up in the show lying on his back, flagrantly naked, displaying his testicles like a shameless dog — looks out at us from the nearby etched portrait with a mournfulness worthy of Bernard Buffet. Whoever you are in real life, a Freud etching turns you into a sad clown.

And because the prints are black-and-white, created with clusters of small marks as if done with iron filings and a magnet, they have none of the slabby solidity of the painted portraits. Instead they provide a relief from it, which adds to the airiness. 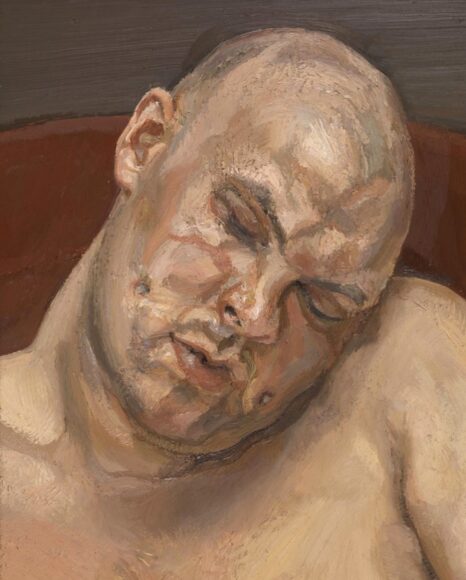 A final good decision by the curators is to intervene here and there on the journey with pertinent photographs by eminent observers. Cecil Beaton pictured the artist himself in 1956 — wild Welsh hair, student jumper, scowl — and posed him in front of some jutting stag antlers that add a surreal twist to the classic angry young man look.

A couple of decades later that excellent Soho photographer Bruce Bernard gave us Freud, at the age of 61, standing effortlessly on his head on a bed, while his beautiful and waifish daughter Bella looks on with amused trepidation. That’s Dad for you.

Dawson, the naked studio assistant, is also an accomplished photographer whose insights into Freud’s studio behaviour are particularly revealing. One of the points his photographic record keeps making is that Freud in his portraiture was a cunning storyteller. The scruffy props with which he surrounded his sitters are there for a reason.

The aforementioned nude portrait of Dawson on a bed with his dong dangling is enlarged in meaning by a studio shot that shows the set-up in real life. The photo makes clear how deliberately Freud had posed a messy potted plant next to the naked Dawson to compare its withered leaves to the wrinkles and sags of his naked body. In horticulture, as in human life, time is the enemy, goes this enlarged storyline. 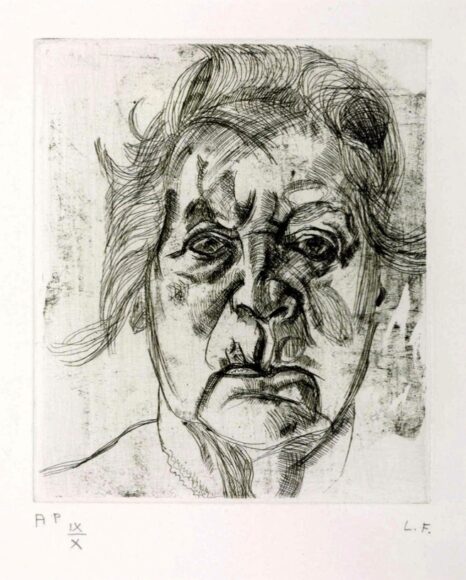 The well-chosen photography takes us beyond the reach of Freud’s controlling hand and adds welcome helpings of wit and observation. It’s further relief from the sweaty claustrophobia.

The overall effect of these good decisions and nice touches is to create an exhibition that sees the painter from a lighter side. Freed, in the main, from the nervy intensity of his giant nudes, where the poor sitters have been forced into uncomfortable nakedness like snails plucked out of their shells, the show shifts our understanding of Freud on to gentler slopes. In a pleasing paradox, the modest selection increases our appreciation of this Marquis de Sade of painters, and discovers a nicer, less cruel Freud than the one that is usually served up.

Some of his most notorious sitters — the giant Australian pose artist, Leigh Bowery, with his pythonesque member; the artist’s mother, whom he observed so relentlessly on the way to her deathbed — are represented warmly and empathetically by small head and shoulders portraits that feel pleasingly simple and shorn of confrontation.

Proof, then, that in Freud, as in most things, less is more.