She is one of the most important artists working in Britain today — she’s brilliant, intense and a bit bonkers. Why is she so perversely overlooked? 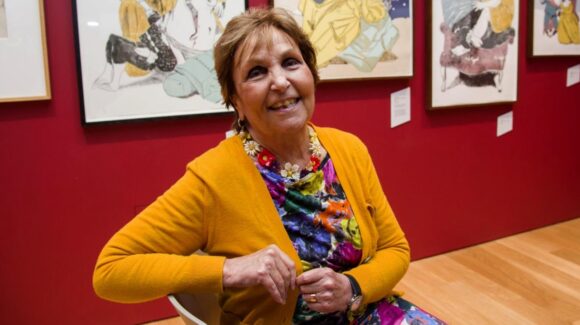 She’s fierce. She’s exciting. Her art connects with your emotions and slaps them awake. The marks with which she creates her works are explosive and sudden in the way a lightning flash is explosive and sudden. Boy, can she draw. She’s imaginative. She’s inventive. And, yes, she’s definitely a bit bonkers. For all these reasons Paula Rego is as important an artist as we have working in Britain today.

Yet, perversely, her reputation has stuck around the No 2 slot. The Hockneys and the Auerbachs seem always to outrank her. Before them there was Freud. Before Freud there was Bacon. It’s puzzling.

I write all this having emerged swaying from the superior retrospective arranged for her by Tate Britain. What a triumph. Under its past two directors Tate Britain has got nothing right. Yet here, spectacularly, we see it getting almost nothing wrong. From Room 1 to Room 11, it’s a gripping and fascinating journey, with many pictures we have never seen before, and a generous stretch of those haunting feminine fantasies for which she is best known: the ones that do with pastels what Haitian voodooists do with pins.

Like most of the big hitters of modern British art, like Freud, like Bacon, she arrived from elsewhere. In their cases it was Berlin and Dublin. In her case it was Lisbon. They brought something harsh and northern. Rego, now 86, brought something tempestuous and southern. It’s one of the things that is held against her by the cold British fish. We’re a cod nation, not an octopus nation.

Tate Britain begins its exciting journey in an angry world ruled by a monster: the snake-eyed dictator Antonio Salazar, whose fascist party was in power in Portugal from 1932 to 1974. Rego was born into this political nightmare in 1935; her 40-year wait for Salazar to die makes England’s yearning for another World Cup feel like piffle.

The first picture here, painted when she was 15, is thunderously precocious in skill and mood. Called Interrogation, it shows a weeping woman huddled on a chair, flanked by two sinister interrogators we see only from the waist down. No faces. One holds a screwdriver. The other a drill. The one with a screwdriver has a crotch that is showily bulging.

How does a 15-year-old girl know all this? Born into business money in Lisbon, she had nannies and a big house. The spoilt Alices who populate her art in its most familiar phases are clearly versions of herself. Bow in hair. Nice clothes. Peter Pan collar. In other circumstances such pampered origins would be an artistic disadvantage. With Rego the opposite happened. Her wilfulness made her unstoppable.

Having quickly found a way to make powerful art, she quickly starts trying other ways; the beginning of a career-long restlessness. Dylan Thomas’s Under Milk Wood is relocated, amusingly, to a Portuguese kitchen, where some stocky women are killing a flapping cock. Yum yum: he’s going to make a tasty stew. Her father, a recurring interest in her tortuous family histories, is portrayed as a candle flame, flickering weakly in the wind.

One thing that does remain constant is her hatred of Salazar. It isn’t always obvious because her art, mindful of the need to preserve its anonymity, goes suddenly abstract. The red and white splodge spewing out its guts on the left of Salazar Vomiting the Homeland, from 1960, is Snake Eyes himself. The yellow splodge in the centre, with the prickly and unruly outburst of pubic hair, is a woman. Any woman.

Lively and colourful though they are, the abstracted political attacks of the opening rooms are hard to love. You need to be Portuguese, I suggest, to instinctively recognise their thrust. It’s also true that Rego’s fecundity leads to some confusing visuals. She’s not the type to select one symbolic blob if 50 are available. The result is an abstracted art that is crowded, bitty, difficult to follow.

In 1951 she was sent to finishing school in England, and then entered the Slade School of Fine Art, where she met her husband-to-be, the painter Victor Willing. She was 17. From then on — she’s still with us, hallelujah — a tussle ensues between Portuguese emotion and British reserve: Iberian storminess and North Sea cold.

It’s a brilliant battle. Willing, the love of her life, takes over from Salazar as the masculinity in her sights. He’s unfaithful. Cruel. Demanding. A sponger. When multiple sclerosis strikes him down in 1966 he becomes her burden. She looks after him, clothes him, shaves him, and gets nothing in return but spite and sarcasm. An English woman might have upped and left, but she’s Portuguese and was brought up to be loyal. So she stays.

We know all this from the fabulously intense and eloquent art that begins pouring out of her once the kids are grown. In her life she can’t escape. But in her art she can. She can also mock, torture, humiliate, in a private visual language that is too emotionally legible to be misunderstood.

Where previously her angers had hidden behind an arras of abstraction, the scary family dramas are now acted out by a sinister cast of animal stand-ins. In Red Monkey Beats His Wife, from 1981, there’s no doubt who the monkey is, and who the wife. In Wife Cuts Off Red Monkey’s Tail she pulls out a giant pair of scissors and castrates the appendage between his legs. Remind me never to say anything bad about Paula Rego.

The catalogue — six essays, by six women, selected by two female curators — joins the exhibition wall texts in framing these complex angers in a #MeToo context that is reached for too casually. It’s the exhibition’s only weakness. “Men,” the wall texts seem to be shouting, “keep out.” But that’s the paperwork talking, not Rego.

Far more revealing is the emphasis placed on the lengthy Jungian therapy she went through as she sought to quieten the storms unleashed by her father, Salazar and Willing. A recurring bitterness towards all of them results in image after image in which they are cast as burdens: little Alice has to clean the policeman’s shoes; she lugs him from chair to chair because he can’t walk; she nestles him in her arms because he’s as dead as a Christ in a Pietà.

And when, in one of the high points of this increasingly gripping psychodrama, she lifts her skirt and invites him in, the immobile man-dog at her feet can only sit politely and stare. This imbalance of passions between the hers and the hims is made even more obvious in the single-figure pictures that deliver the most memorable moments of a riveting show. It’s a format that forces her to be simple and constrains that Mediterranean tendency to add another detail to the magic realism.

The Dog Women pictures are especially gripping. It’s the 1990s. Willing has gone. It’s just her and her thunderous id. Never afraid to switch styles or try new materials, she is working in pastels, which she chooses not for their gentleness and poetry, but for their precision, their scratchiness, and for something pent up in them that no one else had previously noticed.

Acting out all the parts is Lila Nunes, the Paula Rego stand-in who looks just like her, and whom she uses not just because you can’t pose and draw at the same time, but because having someone else play you adds the frisson of a fairy story. It’s thrillingly Jungian.

In Bad Dog Lila, with her top off, clambers across the bedsheets like a whipped cur. In Dog Woman she crouches on all fours and howls at the moon. In Targetshe unzips her dress and reveals her bra. In Bride she turns into Paula’s daughter, Victoria, lying on her back and comparing the princess whites of her wedding dress with the kitchen-maid swarthiness of her ageing face. An old woman’s body is squeezing itself into a young girl’s dreams.

It’s such a powerful clutch of images. The single-figure format comes up trumps again in a sequence of nine remarkable pictures called Possession in which Lila/Paula writhes, dozes and fidgets on her Jungian therapist’s couch. The couch is golden. She wears purple. It’s so intense. That sense you get in Bacon and Freud of a human specimen being pinned down on a bed and examined has had a note of exorcism added to it.

Thus the show builds and builds, cranking up the skill, the invention, the emotion, the angst. It’s the best retrospective for years.

Anatomy of a painting: Shipwreck by Paula Rego, 1999 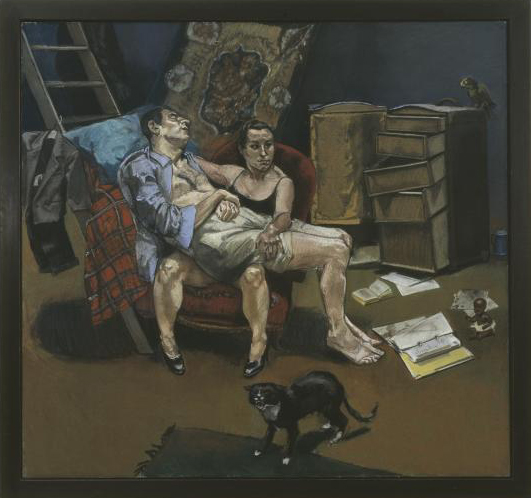 The painting was inspired by Hogarth’s Marriage a La Mode in the National Gallery, which Rego transposed from 18th century England to Portugal in modern times. 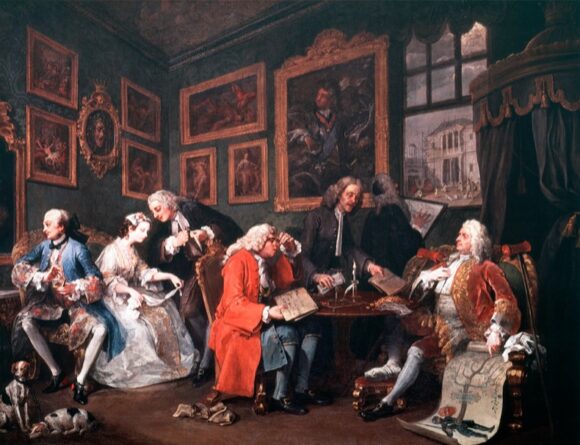 Rego used her favourite model, Lila Nunes, who looks a lot like her, to stand in for her in scenes of family anguish. 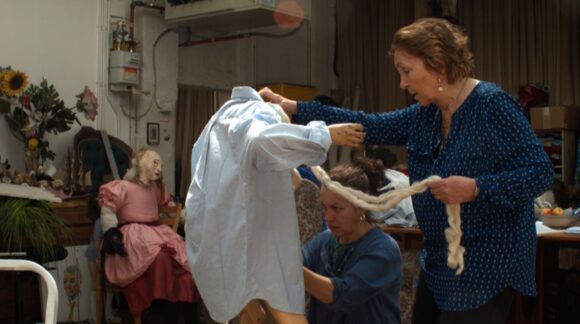 Rego’s husband, Victor Willing, suffered from multiple sclerosis. The artist often portrayed him as a burden that she was stuck with. 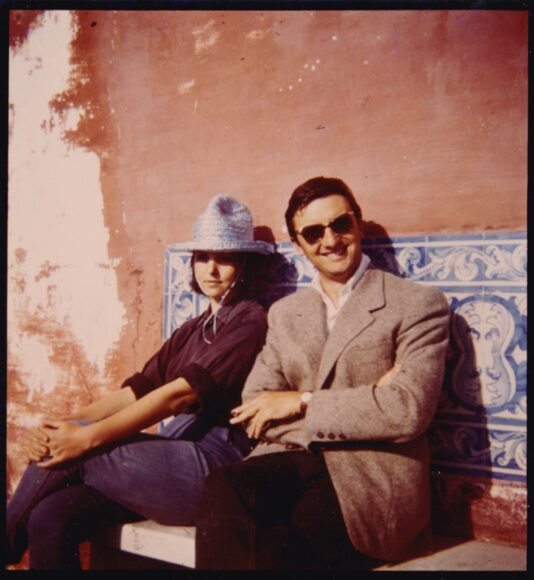 The man’s positioning is based on scenes of the dead Christ being cradled by his mother, like Michelangelo’s famous Pieta. 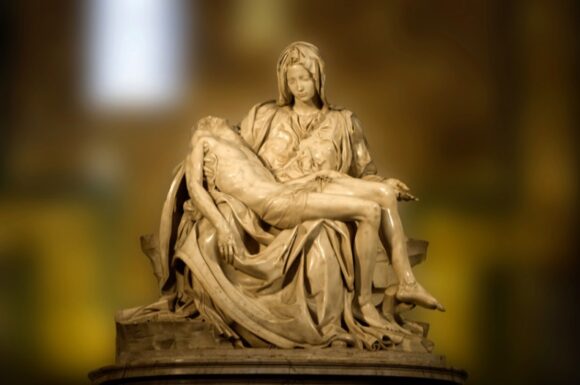 In Hogarth’s story, the dissolute husband wastes their money on brothels and gambling. Here, he loses it all on a bad business venture in Brazil. Hence the Amazon parrot and the tatty account ledgers.

They started at the top of the ladder, now they are at the bottom. The shabby furniture is all that is left of the couple’s fortune.

In the Hogarth, the dissolute husband is killed by his wife’s lover who escapes through a window. In Rego’s update, the presence of an unseen assassin is implied by the hissing cat.

Paula Rego is at Tate Britain, London SW1, until Oct 24