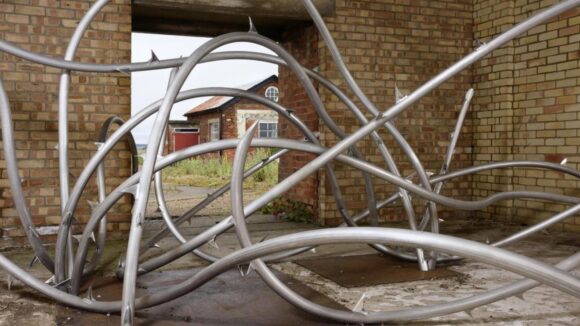 The Artangel organisation has a modus operandi that is simple but effective. It finds a telling or atmospheric location and fills it, temporarily, with tailor-made art. The alchemy has had many successes.

In 2016 they took over Reading Prison and in the cell in which Wilde was kept allowed you to sit on his bed and read De Profundis while Rupert Everett recited The Ballad of Reading Gaol. Then there was Gregor Schnieder’s twin houses of horror, standing side by side in the East End. And Roger Hiorns’s gorgeous cave of blue crystals in a rundown London council estate.

The above all took place in Artangel’s favourite type of location: the crumbling urban ruin. However, for its latest art wheeze it has put on some wellies and a fishing smock, hired a boat and taken us to Suffolk, to the fascinating geographical anomaly that is Orford Ness. 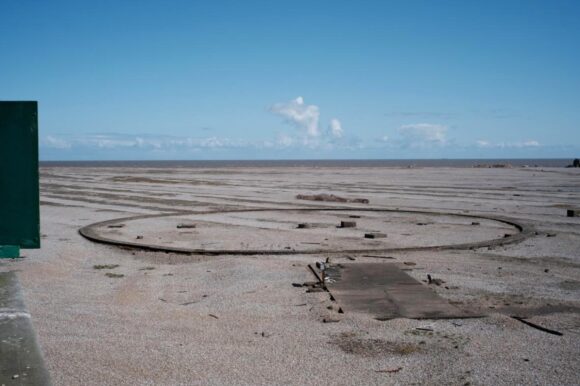 The Ness is a spit of shingle ten miles long that sticks out into the North Sea, just below Aldeburgh. Separated from the mainland by the River Alde, it’s a stony wilderness of shingle that can be reached only by boat and around which you can stomp for mile after calf-killing mile.

Today it’s run by the National Trust, which ensures you stick to the paths and don’t frighten the hares. But until the end of the Cold War the spit was controlled by the Ministry of Defence, which roped it off from the public and used it to test all manner of secret widgetry. Radar was developed at Orford Ness. So were bits of the British atom bomb. The huge metal barn that looms up on the horizon here is Cobra Mist, a listening station built to spy on the Soviet Union.

Only the spooks know what else they got up to at Orford Ness, but as the MoD is notoriously bad at clearing up after itself, the spit remains a collection of evidential ruins. Skeletal carcasses of rusted metal sit atop mysterious mounds. Slabs of broken concrete emerge like whales from the shingle. In every direction bits of dead machinery litter the pebbles. It’s fabulously creepy. And if you throw in the haunting tweets of the lapwing and the relentless pounding of the North Sea you have an irresistible Artangel location.

The new project is called Afterness, a punning title that encourages us to expect some postapocalyptic vibes. And so it proves. A handful of the scary buildings left behind by the army have been taken over by a cast of accusatory artists. Artangel gives you a map. And off you stomp across the shingle, searching for numbered locations and the doomy threads that connect them. 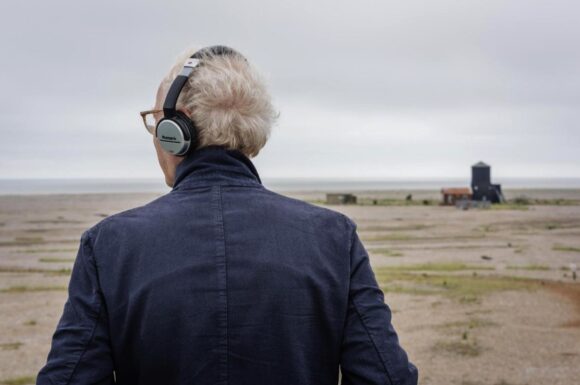 First stop is the Bomb Ballistics building, a cold concrete box in which they used to measure the impact of dropped bombs. The viewing platform is now the location of a poetry reading by Ilya Kaminsky, the Ukrainian poet with hearing difficulties whose Deaf Republic was shortlisted for every poetry prize in 2019.

On the viewing deck of the Bomb Ballistics building the wind and sea are especially loud. But Kaminsky’s poetry ruminates morosely on the noises he cannot hear. “Gulls/you can have/ the afternoon/All I ask is a moment of quiet,” he pleads, in a strange Ukrainian-American accent full of Loyd Grossman vowels. Shut up, seagulls. A deaf man wants some silence.

Some effortful striding along the seashore — those pebbles! — brings you to an ambiguous cube of battered concrete inside which Alice Channer has planted a giant metal bramble that overgrows the interior and pokes out through the windows, thorns glistening. It’s like something out of Doctor Who: alien life form takes over military base.

Next door the Black Beacon was originally a listening post for marine navigation. It has been transformed by Brian d’Souza into a digital jukebox in which you press buttons and listen to the many sounds of Orford Ness: the wind, the sea, the shingle, the gulls. 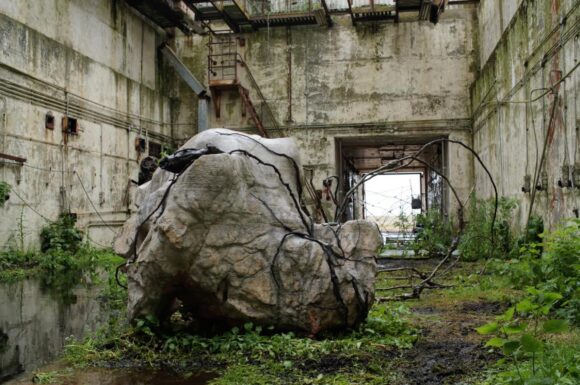 Another bout of stomping brings you to the event’s most ambitious offering, a giant installation by Tatiana Trouvé set inside an especially worrying MoD ruin called Lab 1. With shingle piled up to its roof — to deaden any accidental explosions — Lab 1 played a mysterious part in the development of the atom bomb. Trouvé has turned it into the site of an installation called The Residents, which encourages us to examine what appear to be the things left behind by some recent occupants.

Cheap suitcases float scruffily in puddles of dirty water. You see a radio and a homemade tape recorder; some ragged clothes and dirty mattresses. In the middle a stone figurette has the air of something that was once worshipped. People used to live here. They obviously left in a hurry.

The visual clues encourage you to join the dots. Was this a hideaway in which political runaways would shelter? Did they form their own feral society, a world apart from the ordinary life on the other side of the river? And what the hell was it that forced them to leave in such haste?

Thus Afterness fills our head with dystopian fears of state surveillance, secret warfare and atomic bombs, while the tweeting of the lapwings and the leaping of the hares add a dollop of coastal surrealism to the experience.

Creatively the art here, with its standard issue Mad Max moods, is a bit too predictable. But the location is a five-star experience and, by luring us to it, Artangel is once again fulfilling its seraphic duty.