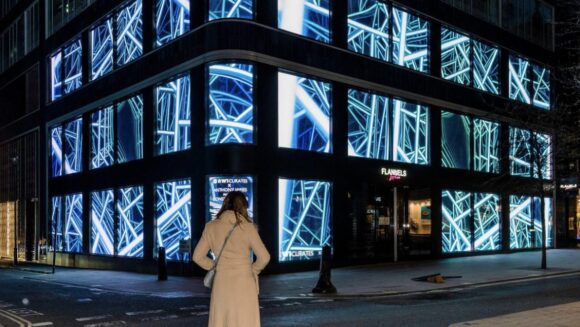 What is the opposite of “enlightenment”? Nescience? Puzzlement? I ask because such a mood is rolling through art, and we need to find a name for it. It’s sort of a new age mood — antiscientific, antifactual — but with a gothic bite. If the 18th century was an Age of Enlightenment, our own times have become an Age of Gloaming.

My evidence is the things I have seen in a busy week of gallery-going. With the museums still closed, it has been left to the commercial galleries to fill the void, which they are doing energetically and interestingly. What you don’t get in museums is a sense of what’s really happening: the scream of the street. Museums supply narratives and reflections; galleries bombard you with new stuff.

Thus a show called Threadbare at the Stephen Friedman Gallery looks at the way in which a cluster of artists is working with cloth and fabrics to produce a textile art loaded with symbolic ambition. The background to this return to cloth is the interest shown by feminist art history in the domestic produce of women: the forgotten quilts, the undervalued tapestries, the faded embroideries. The old art history — the masculine one — relegated this distaff creativity to the status of domestic labour. But the new art history — the feminine one — has imbued it with deeper meanings and a mountain of grace. Hence the craze for sewing.

Threadbare gives each artist a space to tailor. Huguette Caland was born in Lebanon in 1931. While those around her were adopting western clothes — tight jeans, body-hugging blouses — she stayed loyal to the roomy kaftan and, with a series of pointed transformations, turned it into a surprising vehicle for identity politics.

The show displays two of these radical kaftans: a lacy black one that is beautifully crocheted, and a simple white one sewn with pleasing Middle Eastern geometry. They’re pretty, but neither manages convincingly to take the big step up from dress to art. I have seen works by her that do. They are not here.

The American artist Jeffrey Gibson has a mixed Choctaw and Cherokee heritage. Indeed, when he studied at the Royal College of Art in London in the 1990s he was sponsored by the Mississippi Band of Choctaw Indians. It’s an intriguing past, and the blend of Native American origins with swinging London sensibilities gives his work a striking flavour.

In Threadbare, his standout work is a geometric wall hanging, bright as a pinball machine, featuring fabulous gradations of Cherokee beads that buzz in your eyes and in which you slowly discern a hidden message: My heart beats for the one I love. It’s the best thing in the show. 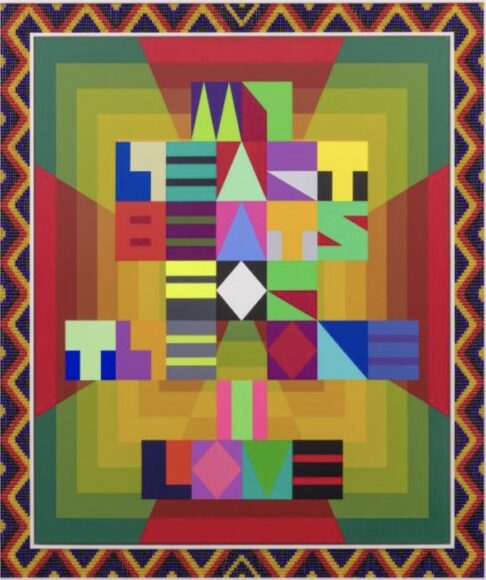 I enjoyed Gibson so much, I forgot my issues with unenlightenment and superstition. Not for long. The most striking example of the tendency here is the work of Tau Lewis, a Canadian of Jamaican heritage who lives in Brooklyn. Lewis makes big, ugly fetish dolls out of recycled leather jackets and sheets of stitched buffalo hide. The results look like something that might have wandered out of ET’s spaceship: red-eyed aliens, with extended limbs and video game faces.

In the show’s paperwork, Lewis points to the influence on her of the outsider artists of the black South. These self-taught artists from Tennessee, Mississippi and Alabama used whatever was at hand to express themselves — “debris and refuse and garbage” — and let their imaginations roam beyond their enslaved present to a distant African past full of powerful witchcraft and angry divinities. The result was a fiery folk art, burning with a sense of loss, sacrifice and disruption.

Lewis makes an unsuccessful grab for the same territory. The leather Nubians draped around her portion of the Threadbare show, with their S&M zips and heavy metal scowls, are the sort of decor you might get in a themed nightclub: pretend voodoo you can dance to. The outsider artists she cites were driven by real terrors, real imaginings. Her own work feels like tourism in comparison.

A few streets away, on Oxford Street, a fashion megastore called Flannels has also made an artistic journey into the inauthentic world of new age spirituality. Flannels is owned by the Frasers Group, which used to be known as Sports Direct, the place you went to buy your jogging bottoms.

Here, its aim is clearly to add a classy note to the flogging of designer streetwear. To achieve that aim the entire store has been clad with wraparound video walls on which is playing a three-storey light installation by an artist called Anthony James who, according to the screams of the press release, is “the world’s leading contemporary light artist”.

Never having heard of him before, I tiptoed into Oxford Street on a suitably subfusc evening, filled with expectation. Silly me. James’s surround-a-shop installation, created with 36 light panels and 33 million LED bulbs (!), features a latticework of crystalline structures that throb, fade and multiply in endless patterns of cosmic colouring. You know those kaleidoscopes you had as a kid, where you turned the bottom and watched the patterns change? It’s like a giant version of that.

Occasionally some silver birches pop up to add a foresty note. Or blobs of molten borax. But mostly it’s the same video journey in and out of a ceaseless universe of Gwyneth Paltrow crystals. “You can get deeply lost inside the vast visual demonstration of infinity which alludes to divinity and the cosmos,” the artist explains. “It nods to this truly prehistoric human desire to create meaning in what we witness.” His installation is, of course, called Constellations.

Fluttering next to Flannels is a big banner aimed at shoppers, telling them that Oxford Street is becoming Smarter and Greener. The Greener bit hangs right in front of the 36 light panels and 33 million LED bulbs, which made me laugh.

For something more adult and intelligent, I recommend a trip to Kingston upon Thames, where Mat Collishaw has created something unexpectedly profound inside an underpass that connects the main street to the river. The work, a giant projection, 11 metres wide, is best visited in the dark. First, because you can see it better. Second, because its moods are the moods of the night.

To the sound of haunting cellos, a bat flutters across the screen. High, high, it soars, above the ghostly outlines of a gothic church. Then it swoops, down, down, through the doors, into the building, through the nave, to the altar itself. Flap, flap, flap, it leaves the church and plunges into a foggy parkland, which it explores on a spooky journey that eventually takes it back to the beginning. And it all starts again.

This dark imagery is achieved with a process called Lidar projection, which measures real things — the church is inch-perfectly the church of All Saints in Kingston — and recreates them as ghostly see-through holograms. Thus Collishaw’s installation combines the foggy moods of a gothic novel with the accuracy of a 3D laser scan.

All this is already good. But when you start reading the artist’s explanations attached to a nearby wall, the meanings enlarge into something huge. What he has actually done here is smuggle a thousand years of local history into his ghostly projection.

The first king of a united England, Athelstan, was crowned in Kingston in AD925, on the site of All Saints Church. The first seven Anglo-Saxon kings, including Ethelred the Unready and Eadweard the Elder, were all crowned at All Saints. The bat, meanwhile, refers to the fact that Kingston is a notable bat conservation area, with seven species of British bat recorded at Bushy Park: seven bats for seven kings.

As for their flight, it was the pioneering Victorian photographer Eadweard Muybridge who first used stop-motion photography to understand animal movement. Born in Kingston in 1830, he was christened Edward Muybridge, but changed his name to Eadweard as a nod to the past.

Collishaw’s marvellous projection, called Echolocation, haunts Kingston with its own history, and plays with time as if it were bubblegum.