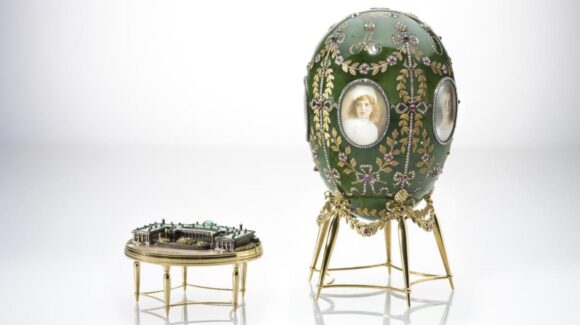 First, they bring the institution to its knees financially by getting Covid-19 to play havoc with gallery expenditure, prompting proposals of a mad round of curatorial cuts. Then they fix it for the big recovery show of the year to be devoted to Fabergé — the most expensive, most lavish, most ornate, most decadent pedlar of unnecessary gewgaws ever to open a posh store in St Petersburg.

The cuts are crazy. One fifth of the curatorial staff could be redacted in a round of harsh lay-offs. Some of the world’s most knowledgeable curators would be offloaded. At one point in this war against knowledge, there was talk of closing the V&A library for a year. Only a vigorous protest campaign and a busy petition stopped that one.

Announcing a big Fabergé show in these circumstances is like forcing an audience that has turned up at the BFI to watch Sergei Eisenstein’s Battleship Potemkin to view Keeping Up with the Kardashians instead. Wrong. Just wrong.

In 1917 Fabergé and everything that the company stood for was a factor in the outbreak of the Russian Revolution. The man on the Moscow omnibus ogled the impossibly intricate jewelled eggs that his tsar was giving his tsarina for Easter, compared it with his daily plateful of thin gruel and decided that Russia needed some equitable redistribution. Having turned itself into a joint-stock company in 1916, with a capital of three million roubles, Fabergé was taken over by the Bolsheviks in 1918 and shut down.

What many of us will not know is that the company’s only store outside Russia was opened in London in 1903. It, too, was a noisy success. “Royalty, aristocrats, American heiresses, exiled Russian grand dukes, maharajas, financiers with newly made fortunes, and socialites flocked there to buy gifts of unparalleled luxury,” screams the show’s excited press release.

The British royal family joined in happily with the gewgawing. Edward VII and Queen Alexandra had jewelled portraits made of their favourite farm animals at Sandringham. The king’s mistress, Mrs George Keppel, gave him an elegant art-nouveau cigarette case with a snake laid in diamonds biting its tail — a symbol of everlasting love. A cigar box made of jade, inlaid with an enamelled view of the Houses of Parliament, was the gift of Grand Duke Michael of Russia. He gave it to Edward VII on Guy Fawkes Day.

As far as I know, no V&A curators shopped at Fabergé back then. They certainly won’t be shopping there now.

Fabergé in London: Romance to Revolution opens on Nov 20, vam.ac.uk