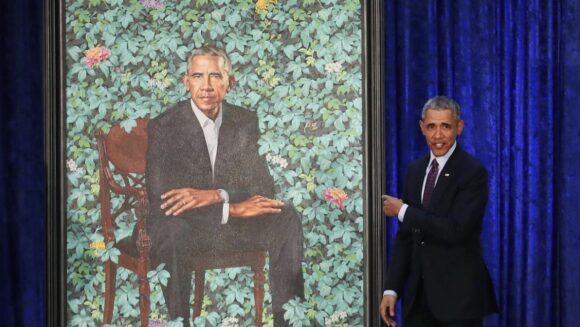 What’s this? It’s just been announced that Kehinde Wiley is to have a show this year at the National Gallery in London, and that it will feature new paintings and a new film. Blimey O’Wiley! The world really is changing.

Wiley was born in South Central, Los Angeles, in 1977, slap in the middle of gangland. Home of the Crips and the Bloods, it’s a notorious urban turf better known for producing drug dealers than artists. His mother, I read, ran a thrift store on the pavement outside their home, and the family would tour the local rubbish dumps looking for things to sell. As well as Kehinde, there were five more brothers and sisters. Their dad left and returned to Nigeria. Their mother did the bringing up.

So I think it’s safe to say no artist with Wiley’s kind of background has been invited to the National Gallery before: the old masters are going to be hearing a voice they won’t recognise. His art has a loudly stated ambition to reroute the way we think about black people in art and to adjust the direction of art’s future. But the really blessed thing about him, I think, is how the zing and fertility he brings to his task is showing up the dullness and passivity of all his surroundings. Wiley isn’t just waking up black art. He’s waking up all art.

He’s best known for his 2017 portrait of Barack Obama. It was the first official presidential portrait by a black artist, and the first that was fun to look at. Obama is shown sitting in a hedge, the vegetation creeping in from all sides as he tries to appear presidential. His hands are folded. He leans forward. He wants to mean business.

In the usual presidential terms, it doesn’t quite work. Who ever saw a president sitting in a hedge? The creeping vegetation strikes a comic note and disturbs the authoritative tone.

But then again, perhaps an aura of presidential authority, spelt out in capital letters, is an aura we can now live without. Just as Nelson Mandela managed to achieve huge moral authority and true leadership greatness while seemingly dressed for a barbecue, so Wiley’s Obama has a mood to him that is efficient and communal rather than overbearing and supremacist.

At the National Gallery he will be shifting his focus from portraits to landscapes. A new body of work will look at the romantic landscape tradition of artists such as Turner, Friedrich and Vernet, and will seek to infuse the genre with a contemporary black urgency. It’s a cloudy agenda. All I can imagine at the moment is haunting black figures standing on mountain tops enveloped in dense romantic mists. We’ll see.

Also planned is a new film piece that will deal in some way with the experience of slavery and the textures and implications of water. In his previous film, Narrenschiff, the Ship of Fools, Wiley produced a dreamy ballet of black figures struggling in giant waters and trying to reach solid land. It said nothing specific about slavery. But every molecule of cinematic H2O seemed somehow to address the issue.

What’s certain is that he is not going into the National Gallery to add another tick to his location list. He’s going in to show up the past, to challenge our understanding of the role of art, to shout in a voice that hasn’t been heard in there before, and to point the gallery in a new direction.