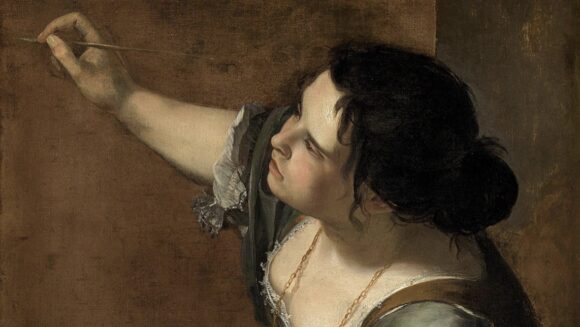 Art history is a subjective discipline. At any given time its thrust depends on the attitudes of whoever is holding the pen. And where Jennifer Higgie is unquestionably right in her spell as a pen holder is in complaining that western art history has been written chiefly by men, and reflects attitudes and prejudices that are overtly masculine.

As she points out, it is indeed ridiculous that the two most popular entry-level slabs of art history, Ernst Gombrich’s The Story of Art and Horst Janson’s History of Art, omit to include a single female in their artistic canons. That really is outrageous.

Unfortunately, Higgie’s own effort on this significant battlefront, a charged and emotional look back at the history of female self-portraiture in art, is guilty of the same fault. So subjective is it in its desire to view the achievements of art history in a feminine light, so driven by projection and prejudice, that it ends up being more unreliable than the male efforts against which it has gone to war.

Higgie’s recurring point is that women and self-portraiture have a special relationship. To make this argument she presents a parade of 22 female artists, from Antwerp in the late Renaissance to New Zealand in the 1950s. It’s a diverse cast united most firmly by the fact that they press the author’s button. “I have selected a smallish group of women . . . whose stories, in particular, fascinate me personally,” she confides early on. “The book is clearly not encyclopaedic: in many ways it’s meandering and personal.” Who needs a review when the author does it for you!

The 22 artists who pass the Higgie inclusion test range from the thunderously obvious — Artemisia Gentileschi, Frida Kahlo — to the fully obscure — the New Zealand painter Rita Angus, who paints herself as a psychedelic goddess, and Margaret Preston, an Australian painter of flowers who records herself as a botanical specimen.

These varied presences are arranged in chronological order and then subdivided into thematic blocks. Thus Artemisia (Higgie dispenses with family names on the grounds that her artists were often forced by marriage to change them) appears in a chapter devoted to “Allegory”, while Frida finds herself in a grouping focusing on “Hallucination”.

We begin with a curious self-portrait from 1548 by the Antwerp painter Catharina van Hemessen, sitting before an easel, in the act of painting. Stiffly done, far from brilliant, the picture earns its prominence by supposedly being the first self-portrait to show an artist at work.

With so little known about Catharina, or her reasons for painting the picture, there are acres of space left for lofty imaginings. Her simple act of presenting herself as a painter is amplified thunderously into the news that “she holds her palette and fistful of brushes as tightly as she might hold a dagger in a dark wood”.

Another of the book’s failings is that it is short of helpful illustrations. The few colour reproductions are too small and too infrequent to be truly useful. Yet even in the tiny picturing we have of Catharina’s stiff self-portrait there is zero sense of daggers and dark woods. As a member of the Guild of St Luke, the working guild for painters in Antwerp, she is more likely to be referring to the story of St Luke, the patron saint of painters, who is often shown in Netherlandish art sitting before an easel, painting the Virgin Mary. Indicated crudely in the corner of the canvas that Catharina is painting are, indeed, the first outlines of a Madonna.

The early stretches of the book are packed with passages of fierce projection elbowing aside information. The marvellous Sofonisba (Anguissola) also gets a lengthy study in the “Easel” section, but here too the art history is wilful. Recent studies of a picture called here Self-Portrait with Bernardino Campi have convincingly argued that it is actually a self-portrait by Campi, not by Sofonisba, and that it shows him painting his most famous pupil. One look at Campi’s fierce outgoing stare in the portrait is surely all you need to recognise its true authorship.

When Artemisia makes her inevitable appearance on this wonky stage, the unreliable nature of the readings is made more glaring because we have so recently had a superb exhibition at the National Gallery in London to correct the suppositions. Artemisia’s Self-Portrait as the Allegory of Painting, which forms the centrepiece of the book’s “Allegory” section, turns out not to be a self-portrait. The National Gallery show made it obvious that the woman in the picture is 20 or so years younger than Artemisia would have been at the time, and looks nothing like her.

As the book struggles forward to our own times, its unsteadiness in the past gives way to something more concrete. Much more is known about the artists under consideration, so the chapters can now be filled with a succession of potted biographies masquerading as discussions of self-portraiture. Frankly, it’s a relief.

Gwen John and Paula Modersohn-Becker inspire the best chapters, with useful summaries of their careers animated less obstructively than before by Higgie’s determined imaginings. There are even some welcome discoveries in the list, artists about whom little has previously been announced — the Russian impressionist Marie Bashkirtseff; Helene Schjerfbeck from Finland; Nora Heysen, another Higgie compatriot from Australia.

However, these less familiar additions, fresher though they are, fall well short of tipping the book into the useful category. As far as self-portraiture goes, the only truly convincing likeness here is of Higgie herself.