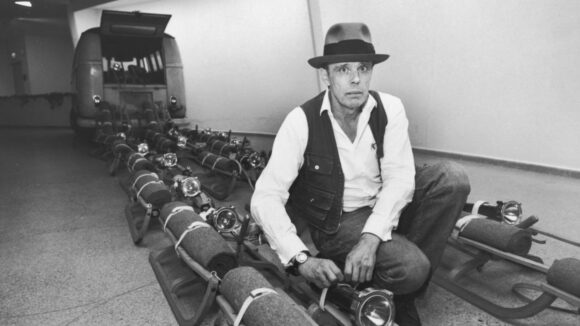 If you asked the art world to vote for the most influential artist of the second half of the 20th century, most would probably go for Andy Warhol. But the rest would go for Joseph Beuys (1921-86).

What was he? It’s a big question. Sculptor, thinker, professor, performance artist, theoretician, self-mythologiser, shaman – Beuys collected creative roles as others collect baseball cards. Enlarging his artistic persona to mythic proportions with complex imaginings and deliberate lies, he strode across the postwar art scene like a mad German messiah.

In his best years, the Seventies and Eighties, he seemed to offer everything that had been lost to German culture – leadership, myth, spirituality. The Nazis had turned them into evils. He was reclaiming them for the side of the angels.

When the Berlin Wall fell, his contribution seemed suddenly to turn into yesterday’s news. Yet in matters of the environment, human creativity and the hunger for spirituality, so much of what he predicted has come to pass.

Jeans, fishing vest, trilby
Beuys’s greatest creation was himself. Early in his career he settled on a look — jeans, white shirt, fishing vest, trilby — that never changed. In posters, films, photographs, that’s what you always see. This look proclaimed him to be a man of action: Indiana Beuys, artistic adventurer, searching for spiritual salvation and opposed to the chic, the rich, the overdressed. The irony is that Beuys’s “poor” look made dressing down glamorous. Soon, tout le monde would be putting holes in their jeans.

The tall tale-teller
To enlarge his image, Beuys told various porkies. The biggest was about his time in the Luftwaffe when his plane was shot down over Crimea. According to Beuys, he was saved by local Tartars, who smeared him with animal fat and wrapped him in felt to keep him warm in the snow. It never happened. But from then on, fat and felt became materials that featured regularly in his sculpture. What’s eerie about his felt suit hanging on a wall is how effectively it seems to speak of warmth and salvation.

The vitrines
Beuys made lots of vitrines – glass cases in which he would arrange humble materials that seemed to have been saved from the past and that felt as if they were trying to tell a story about their origins. He was inspired by a visit to Auschwitz, where the possessions of the dead, displayed blankly in glass boxes, triggered dark imaginings in the spectator, plus feelings of sadness and empathy. These days vitrines are a common sight in art. It was Beuys who popularised them. 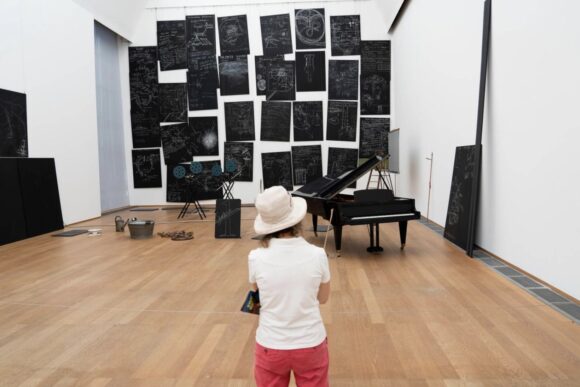 The blackboards
Beuys had a thing about blackboards. In the gallery talks he organised, he would stand in front of one, chalk in hand, like a hip archaeology professor, and then proceed to cover them with complex scrawls, symbols, numbers and additions as he sought hopelessly to explain the interconnectedness of the Beuysian universe. The talks would go on for hours. As if he was daring you to walk out. Later, the old blackboards, packed with chalky scrawls, would be sold as expensive artworks.

The coyote show
Much of Beuys’s work was impenetrable. “I think nowadays there’s a deep misunderstanding amongst people that art should be understood through logical sentences,” he explained to an interviewer. There was certainly nothing logical about his performance with a coyote, mounted in New York in 1974. For three days he lived inside a Manhattan gallery with a live coyote, the two of them penned together in a small corral. As word spread, curious crowds turned up to watch. Big Brother was being invented!

Free International University
Beuys once surprised an interviewer by announcing: “Teaching is my greatest work of art.” The desire to change the world through instruction and example underpinned much of his work. But this ambition was never confined to galleries. He was also a busy founder of schools, organisations and institutes, also of the German Green Party. His most ambitious creation was the Free International University, an école sans frontières that sought to bring together the sciences and the arts.