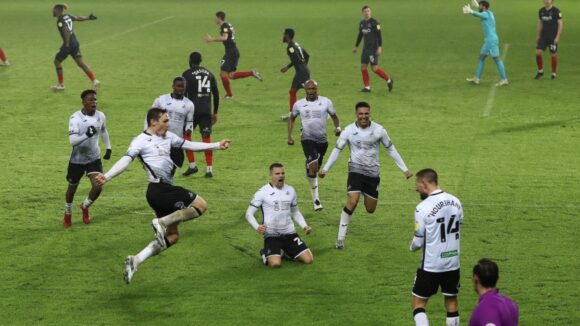 Have you ever seen a happy sports photographer? Me neither. We go to the football to be excited and uplifted. Sports photographers go to get cold and rained on, and to have Adebayo Akinfenwa crashing down on their nuts after another poor Wycombe Wanderers corner. No wonder they come across as such a grumpy breed.

But the gods of art love their football as much as the rest of us, and although it is their divine duty to keep sports photographers miserable for most of the winter, they occasionally let one of them take a great picture. Which is what happened at Swansea City v Brentford last week after Conor Hourihane scored his lucky equaliser for the home side.

Hourihane is that yappy breed: an Ireland midfielder. He is blessed with all the attributes you need for the role — good at busting his lungs, good at tugging shirts. But he has two more attributes that stand out: his Irish luck and his fabulous left foot.

I have personal experience of the luck having been at Aston Villa v Reading in Villa’s promotion season of 2017-18, when they won 3-0. At half-time there was nothing in it, although my team, Reading, had had Dave Edwards sent off. Down to ten men, we spent the second half defending until Hourihane put Villa 2-0 up with a lucky header. No one expected the goal to come from such a little-used part of his anatomy. Fast forward to last week and Swansea’s clash with Brentford. Villa have loaned Hourihane to Swansea so he can get the first-team action he has been denied in the Premier League. Swansea are second in the Sky Bet Championship but hardly firing on all cylinders. Brentford, on the other hand, are fizzing: the best team I have seen in the Championship this season. Before Christmas they played Reading off the park and were doing the same to Swansea before finally going ahead when Tariqe Fosu, formerly of Reading, headed in. It looked like curtains for the Swans. They had not had a shot on target all night, when their lofty No 9, Jamal Lowe, lumbered up the right wing and was touched lightly on the arm by Mads Bech Sorensen, causing Lowe to sit on the grass, as if he had been fouled. Up stepped Hourihane and his lucky left foot.

Whipping the free kick into the Brentford penalty area, he was hoping for a successful glance or a helpful rebound. Instead, the ball sailed over everyone and drifted into the far corner. Cue crazy Swansea celebrations. And that is when the gods of art decided that the photographer, Kieran McManus, from Rex Features, should have his moment in the sun.

It is one of those rare moments in sports photography when everybody finds themselves in exactly the right place. Having scored his lucky goal, Hourihane, on the right, turns his back on us and welcomes the rest of the picture’s cast like Napoleon celebrating his victory at Austerlitz.

Arriving at his feet in a ballet of perfect celebratory co-ordination are his ecstatic team-mates. On the left, the Wales wing back Connor Roberts, dances in the air like a young ballerina in a painting by Degas. In the centre, Jake Bidwell slides in and roars like the lion at the start of a Warner Brothers movie. Behind them, the three graces of the Swansea line-up, Lowe, Marc Guéhi and André Ayew, arrive in unison to complete an elegant 1-3-3.

But the picture is not as good as it is simply because of this perfect Swansea adoration. Brentford, too, play their part, with that ragged retreat at the back. “How did that happen?” shouts their body language as they scurry haplessly to the centre circle. “Hourihane’s that way,” screams the rest of the photo.

So, lucky Swansea. A draw was more than they deserved. Hourihane gets to display his left foot and a four-leaf clover. And there is someone on the sidelines to record it.