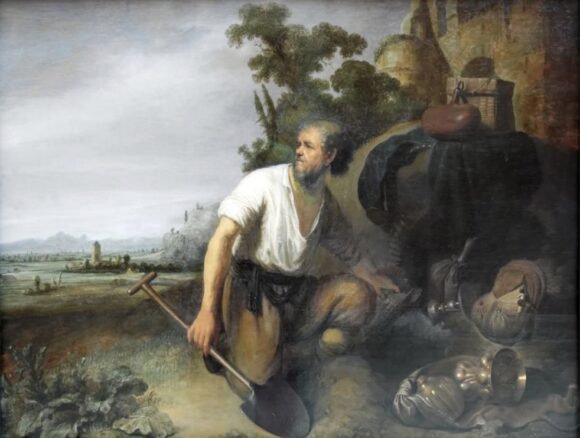 Everybody is talking about The Dig, Netflix’s three-hanky excavation flick about the finding of the Sutton Hoo treasure in a field in Suffolk in 1939. Most of the chatter is about Ralph Fiennes’s puff-perfect Basil Brown, the self-taught archaeologist whose earthy instincts underpin the discovery. There’s positive chatter, too, about Carey Mulligan’s Edith Pretty, the landowner in whose field the treasures are hidden.

The hefty class divide between Basil and Edith prompts early suspicions they may eventually share the hay. Yet, after the tiniest gust of romance, The Digreturns to being mostly about the dig. Ken Stott appears as the fabulously bulbous baddie from the British Museum who thinks he owns the past. And everybody gets wet scrambling in the mud looking for the sophisticated new Anglo-Saxons who are the movie’s unseen stars. Because the fascinating thing about the Sutton Hoo treasure is that it’s too good for its own origins.

The Anglo-Saxons were goat-rearing invaders from Germany. Their training was in central European peasantry and bashing other tribes on the head. How, where and why did they acquire the artistry to create the exquisite gold and garnet booty that is now a highlight of the British Museum?

According to Stott’s BM “expert”, brought into the film to cast BM experts in a bad light, Sutton Hoo proves we’ve got the Anglo-Saxons wrong. They were always more sophisticated than we assumed. Perhaps. Or perhaps the pieces were made in Byzantium, as has also been suggested. What’s certain is that treasure isn’t the only thing being excavated here. So, too, is a nationalistic archaeological agenda that imbues Basil Brown’s every wobbly bike ride into the village with a yearning for a lost England.

In art, the finding of buried gold can nearly always be understood as the projection of a deep-lying fantasy. If exhibit A in this argument is The Dig, exhibit B is a painting by Rembrandt that hangs in the Museum of Fine Arts in Budapest, called Parable of the Hidden Treasure.

It’s very un-Rembrandty. So un-Rembrandty that some scholars prefer to give it to Rembrandt’s pupil Gerrit Dou. It shows a snub-nosed Basil Brown type with a large spade, unearthing gleaming gold goodies — two pots, a candlestick — in a dusty field. Compared with the Sutton Hoo haul it’s dull stuff, but that alone doesn’t explain his glumness.

Where he should be excited, Rembrandt’s unhappy digger turns his head away from the bling and stares instead at the village he’s come from, and, especially, at the church tower at its centre.

The parable in question comes in Matthew 13:44. “The kingdom of heaven is like treasure hidden in a field. When a man found it, he hid it again, and then in his joy went and sold all he had and bought that field.”

So. A guy finds treasure in a field. Instead of taking it home, he hides it in the same place. Sells everything he owns. And with the money buys the field. And digs up the treasure again! Call me a religious numpkin, but it makes no sense. Why hide the treasure again? Why buy the field? Is this a parable about doing the right thing? Or is it saying that going all the way brings a greater religious reward than going some of the way?

That’s the trouble with buried treasure. It never means what it ought to mean.