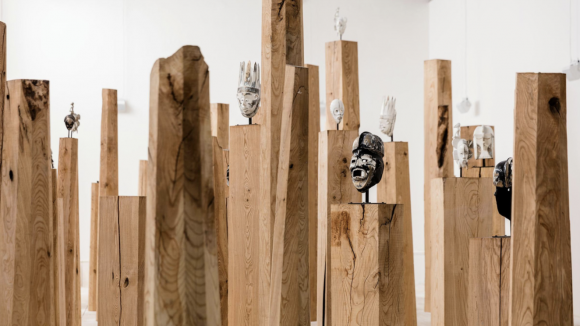 The arrival of Theaster Gates in Liverpool is both an appropriate event and one that stirs up a mix of feelings. At least it did in me.

It’s appropriate because Gates is an artist whose work is underpinned by issues of slavery, while Liverpool is a city with a grim slavery past. The mix of feelings starts when you stare out of the picture windows at Tate Liverpool — at the vast and murky Mersey swirling below, at the passage to America, at Pier Head — and, prompted by Gates, your thoughts turn to the horrors perpetrated on others on the very spot on which you are standing.

Ferry Cross the Mersey? No thanks. Ticket to Ride? No thanks. Penny Lane? No thanks. I love Liverpool for its cheeky grin and its beautiful poetics — it’s my favourite city in Britain — but on the issue of slavery, there’s a guilt here that has not been fully acknowledged.

Gates, too, has a complex past. Born in Chicago in 1973, into a family of nine, he trained as both a potter and an urban planner before emerging in the Noughties as an installation artist with noisy social concerns. As if that were not enough, he is also a university professor, a jazz musician, an adviser on Chicago’s transport system and an urban developer who is transforming run-down neighbourhoods with libraries, cinemas and arts centres. Forget Renaissance man. This is Chicago man.

Yet the opening impression made by his affecting Liverpool show is of sparseness and simplicity. The first room is dominated by a huge sloping sculpture, a black ramp, strikingly plain, that on closer inspection turns out to have been made with roof slates. The big black wedge, the elephant in the room, has no details, no flourishes. All you have to go on in the search for its meaning is a title, Altar.

I neglected to mention that Chicago man also has a masters degree in religious studies, and that the poetics of worship are another of his interests. Altar prompted immediate memories in me of pre-Columbian architecture and the huge ritual platforms of the Incas. There’s a search here, I reckon, for a sanctity that is pre-pioneer and pre-conquistador: a past related to mountains and sacrifices, heaven-bound and aimed at the skies.

The black wedge is so sizeable that it blocks out the other sculptures in the room. But when you do pay attention to them, they mess up the minimalism and pull your thoughts down a lower road. In particular, a bright neon sign saying “Malaga”, revolving in the manner of a cheap motel advert, seems incongruous. 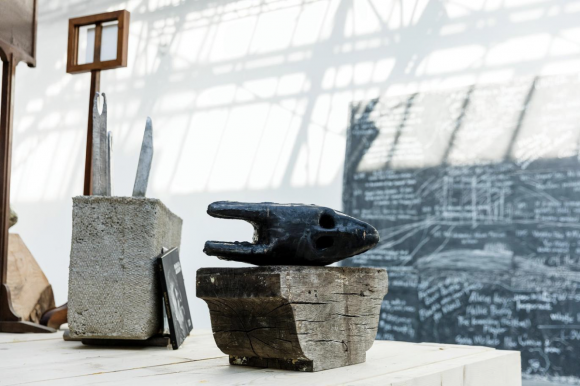 But no. It turns out to be central to the journey. Malaga isn’t our Malaga, Spanish beach hub and birthplace of Picasso. Gates’s Malaga is an island off the coast of Maine with a past that is profoundly sad and pertinent. The show ahead leaves lots of blanks in the telling of the island’s story, but enough is revealed by the sculptures, installations and films to sadden and shock.

Malaga was the only settlement in 19th-century America where blacks and whites mingled and the race laws were flouted. For a century and a half, this pretty wooded getaway was home to a clutch of mixed-race families, bringing up their children in conditions of peace and respect. But then, in 1907, the grotesque realities of segregated America were visited upon the island in appalling circumstances.

Maine was becoming a favourite tourist destination for moneyed whites. And the coast was the preferred site for their new houses and beachside developments. So the governor of the state took the decision to evict the entire population of Malaga, transport them all to the mainland, tear down their homes, split up their families, put some of them in institutions and build a new tourist development on the island.

Gates confronts us with recurring fragments of this dark story in a series of separate works that act together to form an unfolding installation. The black roof slates out of which Altar is constructed turn out to refer not only to the new vacation houses constructed on the island, but to Gates’s father, a roofer, who instilled in his multiskilled son an evident respect for the quiet pleasures of craftsmanship. The garish Malaga sign, revolving like a motel advert, has ambitions to signpost the brutal repurposing of the island.

At the far end of the show, a forest of wooden plinths, carved carefully out of atmospheric timbers reclaimed from the island itself, is topped by a collection of African masks, made by Gates in his potter mode, with alternating expressions of calm and anguish. It’s a tribute to the beautiful woods of Malaga, but it’s been infected by the atmospheres of a cemetery. 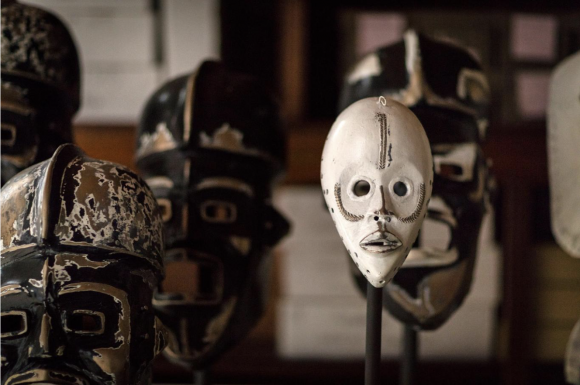 All of Gates’s meanings are conveyed by this kind of visual poetry. He’s an artist who suggests rather than declares. It’s the textures and finishes he favours that convey his respect for craftsmanship: the love of wood, the appreciation of roofing skills. And the show as a whole is characterised by regret, rather than anger; filled with laments, not accusations.

Two concerns, however, are signposted clearly. The first is Liverpool’s involvement in the slave trade, spelt out in a timeline in the opening room, written in factual chalk across a line of slates. The second is an admiration for the pioneering attitude displayed by the community of Malaga in the mixing of races.

The entire show is called Amalgam. The work I liked most on the journey, a 35-minute film entitled Dance of Malaga, is filled with images of black melding into white. A mixed-race couple stroke and entwine. A black dancer takes off his white shirt to reveal a beautiful dancer’s body. Snippets of archive show an assortment of mixed-race children beaming happily at us from behind their protective wall of innocence.

This beautiful visual poem, soundtracked effectively by Gates’s music — yup, he’s also in a band called the Black Monks — is peppered with harsh interruptions from America’s segregated past. “He regards the negroes as an inferior race not of Adam, and their mixture with the higher races as forbidden by God,” spits a witness from Ohio in 1899. “I gave him the most solemn pledge,” insisted Abraham Lincoln in 1856, “that I will to the very last stand by the law of this state, which forbids the marrying of white people with negroes.”

There it all is, in the starkest black and white. The suppression of interracial relationships on religious grounds that are perverse and satanic.

Theaster Gates, Tate Liverpool, until May 3