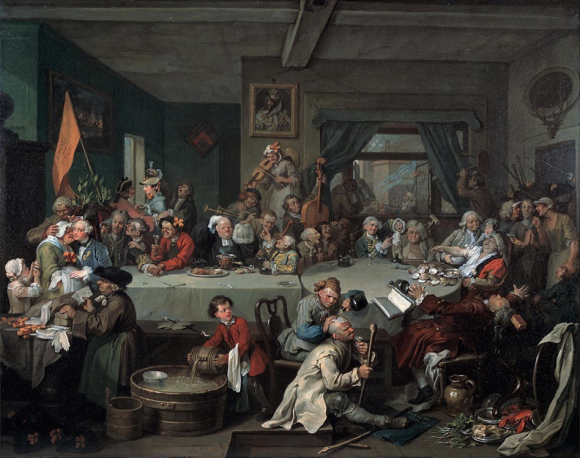 There is never a bad time to look at Hogarth, but I must say the period between a cut-throat general election and Christmas, the so-called season of peace and goodwill, strikes me as an especially good time.

Hogarth (1697-1764) is usually thought of as England’s first great native artist. Blunt, pugnacious, jingoistic, he’s easily mistaken for a Faragist. But there was also a delightful freshness to his work, a rococo atmosphere avant la lettre that was foreign and pioneering. The qualities Hogarth brought to art — quicksilver characterisation, cheekiness, a sense of fun — were new. That marvellous view of his servants at Tate Britain, or the beautiful Shrimp Girl in the National Gallery, were essays in airiness and vitality, as well as novel examples of social empathy.

Where he broke the freshest ground, however, was in the creation of what he called his “modern moral subjects”. These multipart pictorial histories, unfolding in sequences of four, six, eight paintings, were his most important moment. For the first time in its history, British art had come up with something completely original. It happened in an era of fierce political turmoil, the middle of the 18th century, yet it is not until our own era of fierce political turmoil that someone has had the smart idea of bringing together all of Hogarth’s modern moral subjects and displaying them as a group. What’s more, they have done so in the Sir John Soane’s Museum, the crankiest and most different of all of London’s pocket art galleries.

Going to the Soane, with its twisty staircases packed with plaster busts, and its tiny rooms filled with Canalettos, is always an adventure. Going there in search of Hogarth’s modern moral subjects, dotted and squeezed about the premises, in the attic, in the kitchen, is an experience closer to a ghost-train ride than a normal gallery visit.

We start upstairs with the parallel progresses of the harlot and the rake. The first of these, the grim tale of Moll Hackabout and her journey from country girl to London prostitute to syphilitic corpse, was initially told in six paintings completed in 1732. Unfortunately, the paintings themselves were destroyed in a fire in 1755. All that remains is the prints of the series, which Hogarth quickly published and which were an instant success. 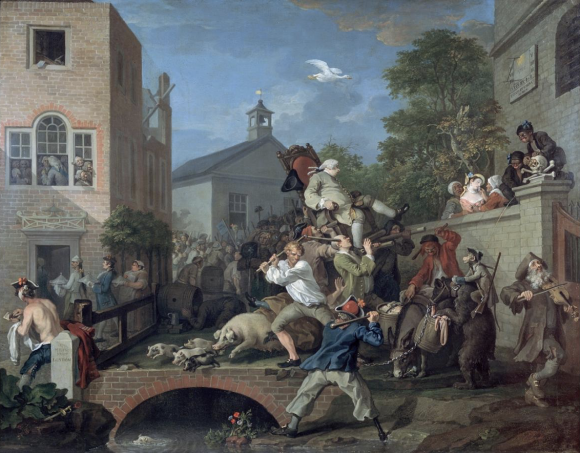 These accidental roots, the moral ambiguity they speak of, are a feature of Hogarth’s output that the show is surprisingly keen to notice. He was never black or white. Never fully moral or fully immoral. Never firmly Whig or Tory. Instead, his art was a slippery beast that slid here and there in the search for traction. A rumbustious essay in the catalogue by the noted Hogarth scholar David Bindman challenges the view of Hogarth as “a man of the people” and replaces it with a more nuanced image of the artist as a naysayer for hire. If the cause was profitable, he might back it.

This moral slipperiness is the reason why the images themselves remain so difficult to measure. Is Moll the unfortunate victim of a cruel London modernity? Or isshe immoral and blighted, a daughter of Eve, fated to end her days in grim comeuppance? It’s never clear. Much the same happens to the unfortunate Tom Rakewell, whose descent is traced in juicy detail in A Rake’s Progress, painted in 1734 and now hanging opposite Moll Hackabout’s decline in an intense face-to-face. This time the paintings have survived — they belong to the Soane — so we have the added pleasure of seeing Hogarth’s quicksilver hands working at top speed in eight action-packed scenes crammed with detail.

A Rake’s Progress swirls from disaster to disaster like a newspaper caught in a storm. Tom comes into money; marries a one-eyed hunchback twice his age; loses his fortune on drink and brothels; ends up in Bedlam, surrounded by lunatics, while the London rich stroll through his cell enjoying his misery. For most of the sequence, he’s the object of your scorn. But then, near the end, you start to pity him, and to blame the world that made him. Typical Hogarth.

A handy map in the catalogue asks us also to notice that Hogarth set his action in particular parts of London, and that this clear urban geography is important. The West End was the territory of the glamorous rich. Covent Garden was their immoral playground. Bloomsbury was the urban hell where the unfortunate gin drinkers were concentrated.

Time after time, the city is branded a crucible of immorality, a process that reaches some sort of apogee in the ghastly progress of The Four Stages of Cruelty. What begins as a lament upon the way Tom Nero treats his dog — inserting an arrow into its anus — ends, three scenes later, with Tom himself having his organs removed by the Royal College of Surgeons while he’s still alive.

However, in his masterpiece in the modern moral genre, The Humours of an Election, completed in 1755, Hogarth swaps the city for the country, locating his dark action in the fictional constituency of Guzzledown, where the Tories and the Whigs have locked horns in a desperate general election.

It’s the largest of his sequences, the funniest, the scariest and, currently, the most pertinent, and it shows both parties chucking the rulebook out of the window in a squalid hunt for votes. The Whigs throw a party at which they ply prospective voters with buckets of brandy. The Tories, meanwhile, march through the streets with banners declaring “No Jews”, in an effort to repeal the Jewish Naturalisation Act of 1753 on the grounds that it constitutes an “abandonment of Christianity”.

In the end, Tory xenophobia wins the day, and the bumptious victor is carried through the streets on a tottering chair that’s about to crash down and deposit him in the Guzzledown sewage system. That’s politics for you. Merry Christmas.