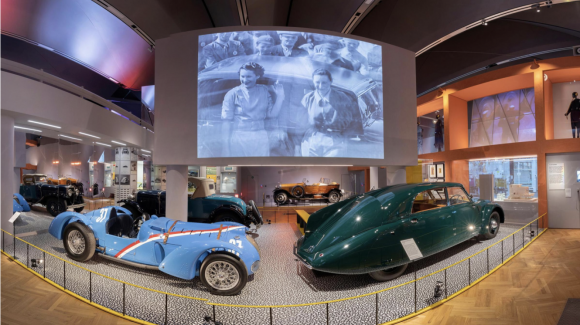 Guess which model the Victoria and Albert Museum has parked at the entrance to its big new car exhibition to attract our attention and draw us in? What has been chosen as an amuse-bouche?

If your immediate thought was “E-Type Jag”, then award yourself a Michelin star. Of course it is. Silver-grey, with chrome trimmings. The perkiest bottom in carrosserie. Sixteen feet long. And every inch of it chronically, nay, fatally, desirable.

“Aha”, some of you will be thinking, “a penis on wheels.” This is clearly a show designed to appeal to the Clarksonian tendency. And you would be absolutely right. As the snippy American comedian Rita Rudner once sniggered: “To attract men, I wear a perfume called New Car Interior.”

But you would also be absolutely wrong. Because this isn’t any old penis on wheels. This is the actual car that transported Meghan and Harry from their wedding. It’s an E-Type Zero, the electric Jag. This car is soundless. It weighs half of what the old E-Types weighed. It’s carbon-innocent. And it travels 170 miles on a single charge. This isn’t a boy’s toy. Neither is it a girl’s toy. This is the car of the future — what we might call the unisex toy.

“No other design object has impacted the world more than the automobile,” says the paperwork for this stimulating event. It’s a brassy claim, one that lovers of houses or computers or WMDs may wish to dispute. I, however, am happy to side with the V&A in the argument. First, because the show is such a good one, so full of vivid observations. Second, because some of the most desirable things I have encountered in my own life have been cars — and I’m not just thinking of the 1965 Ford Mustang in Jayne Mansfield pink. Third, and most important, because cars touch on so many different aspects of civilisation. Understand the car and you understand humanity.

Gary Numan, in his famous Ibsenian drone on the subject, saw them as existential bubbles in which we hide and fester — private crucibles of road rage and ennui. “Here in my car/I feel safest of all/I can lock all my doors/It’s the only way to live/In cars.” That, though, wasn’t what they were for George Best. Best put his finger on the Clarksonian understanding of the car when he quipped: “I spent a lot of money on booze, birds and fast cars. The rest I just squandered.”

Thus, the most potent thing about cars is that there are so many potent things about cars. The V&A has assembled a small but choice cast list of vehicles and enlarged it with a lively array of films, photographs, posters and concept models to create an event that bombards you with fascinating snippets of information.

We begin with the car as a fantasy object. Back in the 1950s, General Motors in America produced a series of concept cars predicting the vehicle of the future. The first of these fantastical torpedoes, Firebird I, is in the show. Shaped like a fighter plane without wings, it would look great traversing the moon on a frictionless autobahn, but very silly parked outside the local supermarket. 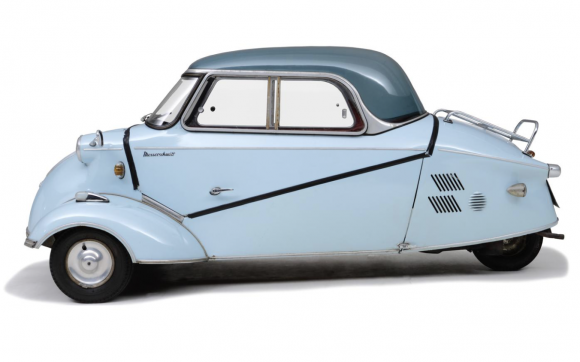 Surrounded by an assortment of sci-fi covers and concept models, the Firebird and its descendants strike an immediate note of impossibility. They drive on empty roads and soar through gaping skies. Their fuel supplies are bottomless and their journeys smooth. “Come on, let’s fly,” giggles a happy blonde to a happy brunette in a promotional film made by GM in 1954 to predict the Firebird model of 1976: a car with wings.

This battle between the imagined and the real is what the story of the car turns out to have been about. There I was, smirking about the 1976 GM Firebird, when what should appear round the exhibition’s final corner but a flying car! Developed jointly by Airbus and Audi in 2018, “designed to relieve traffic congestion”, the electric concept car comes with a clip-on drone to lift it into the skies and an AI drive system designed to make perfect directional decisions.

The story of the car seems never to go in the direction everyone expects it to go. The oldest exhibit in the show — the Patent-Motorwagen No 3, made by Karl Benz in 1888 — was created to ease the demands of travel. But when Benz’s wife, Bertha, drove it 60 miles in the first long-distance car journey, she inadvertently invented car racing. From the start, “How fast can it go?” has been an insistent question.

In 1903, Britain imposed a 20mph speed limit on open roads. But the decision led directly to the invention of faster cars. Brooklands, the first racing track in the world, was opened in Surrey in 1907 to circumvent the speed ban. The Isle of Man became a centre of racing — it still is — because British speed restrictions didn’t apply there.

The other big story the show tells is of vehicular issues bleeding unexpectedly into the outside world and changing it. At the simplest level, these are small fashion developments. In the 1920s, the cloche hat became a must-have accessory because its tight-fitting shape made it suitable for open-top cars. The same styling ambitions that gave us the Tatra 77, the first streamlined car — so much bigger in the flesh than it looks in the photos — were responsible for the thrust and shape of the 1930s swimming costume.

A section dealing with automation tells the story of Henry Ford and the invention of mass production. Ford actually got the idea for the assembly line from the abattoirs of Chicago. In the meat-packing district, the animals would be passed along a conveyor belt and cut into edible bits. Ford’s invention of the factory assembly line for the Model T reversed the process. By putting the bits together, he created a new whole. 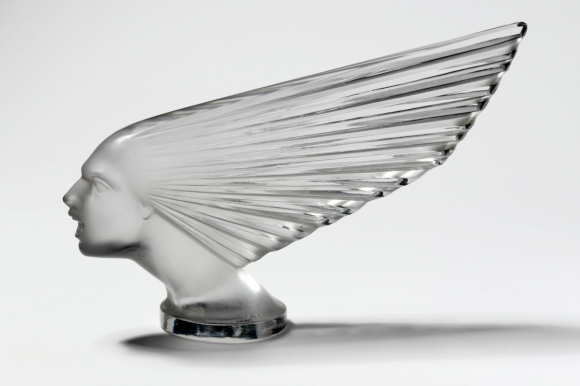 Not all his innovations were as successful. In 1928, in an effort to circumvent the rubber monopoly operated by the British, he acquired a slab of the Amazon rainforest the size of Northern Ireland and established a huge new industrial city there called Fordlandia. The idea was to bring in 10,000 workers and become self-sufficient in rubber. But the jungle had other ideas. In 1934, Fordlandia was abandoned.

This isn’t a chronological show. The story of the car whizzes backwards and forwards as the tale unfolds. But potent coincidences seem to have played a part in the vehicular story, and in one of these, the failed Fordlandia moment ushers in a second half to the display that is notably darker and more troubling than the first. And in the growing evidence of oil exploitation, of environmental pollution and the relentless building of roads, the V&A’s big claims for the impact of the car have their firmest proof.

The motorway network, invented in Italy early in the 20th century, is tracked spreading across Europe in a scary animated map, like a parasitic weed. A startling film of the nodding donkeys outside Bakersfield, California, shows impossible numbers of these mechanical monsters crowding into the desert in the search for oil. Lithium, the main component of electric batteries for the car of the future, is sucked out of the ground in Chile, in giant industrial pools that look as toxic as any oil plant.

If the giggling girls in the Firebird knew what really lay ahead of them in the story of the car, they would not have demanded a ride in the sky. Instead, they’d have asked someone to turn off the engine. And let them out.

Stomach Turner
I was not impressed with the shortlist for the Turner prize this year. All four mediocre talents were making showy political gestures in the hipsterish mix of video, narcissism and tedium that passes for cutting-edge art these days. How, I fretted, would the judges be able to choose between them?

The answer, announced last Tuesday to a barely audible sigh of national dismay — because no one is genuinely bothered about the Turner any more — was that there was no winner. Instead, the four artists on the shortlist have formed a collective, and all four have announced themselves to be numero uno.

Now, any sane person can see what a ludicrous gesture this is. How clearly it invalidates and besmirches the governing premise not just of the Turner, but of any comparable award.

When South Africa won the Rugby World Cup this year, the joy of victory brought their nation together and the presence of a black leader of the team was universally noted and appreciated. But if the World Cup had followed the Turner approach, then South Africa, England, New Zealand and Wales could have jointly proclaimed themselves the winners, and nothing real would have been celebrated.

The shortlisted artists knew what they were entering when they accepted their nominations. If they disagreed with the principles of the Turner, they should have refused at the beginning, not the end.

And that isn’t the worst thing about this dismal gesture. The worst thing about it is that it’s a typical ego-era feint that pretends to be politically wholesome when its ambitions are actually narcissistic and self-serving: to direct our attention away from the art and towards the artist. By showily sharing the gong, four joint nobodies are creeping us ever closer to Andy’s scary prediction about the 15 minutes of fame.