A Caravaggio and Bernini show in Vienna offers an exciting, intimate vision of the baroque era 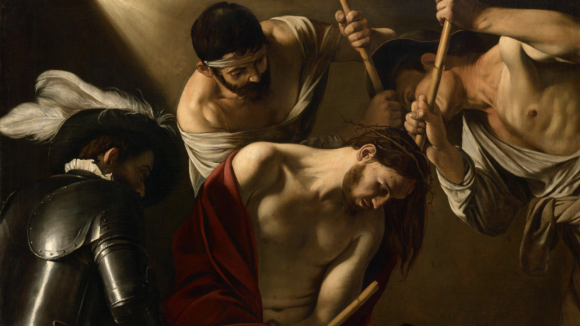 Near and far, the baroque age is suddenly in the news. Near, because the National Gallery has appealed to save Orazio Gentileschi’s The Finding of Moses for free public display, and we need always consider these things properly before plunging our hands into our pockets. Far, because the Fates have conspired to ensure that an exhibition showing what the period brought to the party should open at the Kunsthistorisches Museum, Vienna.

Devoted jointly to Caravaggio (1571-1610) and Bernini (1598-1680), this thunderous display has set out to explain why the baroque age was so transformative, and why these two mouthy presences were its key players. Containing a dozen or so telling works by each artist, enlarged with exciting and well-chosen examples by followers and predecessors, it’s obviously two journeys trying hard to pass themselves off as one — but when the art is as good as this, we need to find curatorial forgiveness in our hearts.

Talk about a power couple! Caravaggio in painting, and Bernini in sculpture, changed the course of art. No arguments there. Both were in Rome for the opening salvoes of the baroque revolution. Both rank in my book as geniuses. And since Caravaggio was, for several years, Gentileschi’s mentor, the show has telling British implications.

The baroque age lasted for most of the 17th century, so there are many avenues to dart down. The present curators have chosen to focus on the various ways in which the era set out to engage our emotions: arousing us, horrifying us, making us laugh. Each of these angles of attack is assigned a slice of the show, and uniting all of them is the baroque age’s USP: proximity.

Before Caravaggio, art and its spectators kept their distance. The spectators stayed over here. The art stayed over there. After Caravaggio, that separation became scrambled. The art began pushing itself in our direction, hunting us down, demanding our attention. Have you noticed how Ryanair, since its big drop in profits, has been bombarding you with emails instead of waiting for you to go to it? Well, what Ryanair is doing to low-cost travel, the baroque age did to art.

A perfect example is Caravaggio’s St John the Baptist, painted circa 1602 and located in the show’s second section, which deals with the enticing emotion of Love. Dear me, what an outrageous image. St John is naked. I suppose he’s about 11 or 12. No pubic hair yet. He’s sitting on a rock, indecently close, sheets and robes cast aside, playing with a beautiful ram, which nuzzles his cheek while John turns towards us and smiles a wicked and complicitous smile. He’s being intimate with a sheep. We’re being intimate with him. 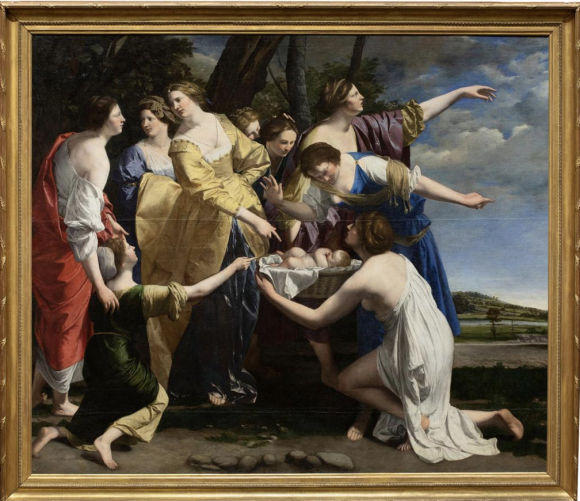 These days, of course, all we see is the eroticism, because we’re an ignorant lot and try to reduce everything to our level. Certainly, it’s present and undeniable. But this is church art. The ram is here not because St John was into bestiality, but because Jesus was the Lamb of God, so that’s him, in light disguise, sharing a warm embrace with his childhood friend and baptiser, his beloved John. John is naked not because he’s having a homoerotic encounter with a sheep, but because he’s gone skinny-dipping by a river and is sitting on its bank. And that river must be the Jordan, where John baptised Jesus. So it’s all there, all implied, all transformed with clever and insidious messaging into an edgy religious masterpiece that speaks first to your nerves, then to your piety.

The Caravaggios that stud this involving journey are determined to get indecently close to us. Most are set in the dark, because the dark is where strange things happen. Most have a glistening physicality to them, as if you’ve come nearer to someone in the shower than you’re used to. Some are arousing. All are claustrophobic. None feels obviously imaginary. It’s obvious, too, that the Caravaggisti, the various stylistic followers who enlarge the show’s numbers, are never as sweaty or as psychological as he was. Caravaggio’s delinquent air is as unique as a signature.

What about Bernini? Well, he too is dotted about the show, trying to trigger emotions that are generally happier and less neurotic than the ones invoked by Caravaggio. But sculpture is harder to deal with than painting — and harder to loan — so, short of tearing up half of the best fountains in Rome and denuding the Borghese Gallery of its greatest masterpieces, no travelling Bernini show can provide more than a faint echo of his achievements.

That said, the Kunsthistorisches has assembled a fine cast of his smaller accomplishments. We don’t get scale, but we do get variety and invention. One of the first sights, in the opening section, Wonder and Astonishment, is his extraordinary Medusa, created circa 1640, a sculpture that involves you in a weird face-off. Medusa, remember, was the Gorgon with the mass of venomous snakes coming out of her head who turned you into stone if you looked at her. Bernini, however, reverses the relationship. His Medusa turns stone into life! 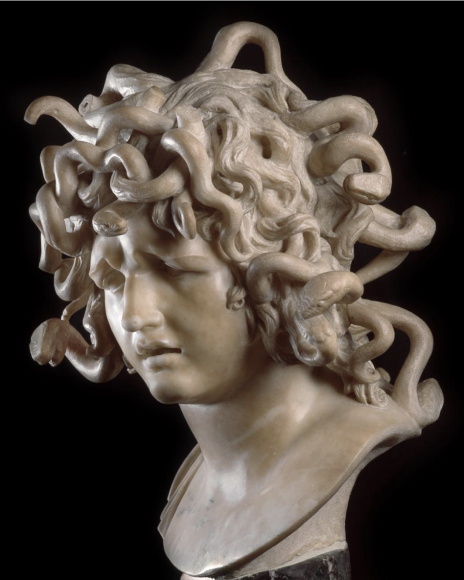 The miraculous realism of the fright of hissing reptiles trying to bite you as you lean in seems to make the marble move. Feel the writhing, feel the slime. From his alchemical den in Rome, Bernini is engineering a situation in which you keep your distance because something deep inside you knows it’s a good idea.

So that’s what Bernini brought to baroque sculpture. Astonishing realism. Unsettling psychological engagement. A sense of the miraculous. An art that entered through your eyes, then proceeded to make a beeline for your emotions. Understanding and highlighting that journey, that ambition, is what this show does so well. This is that rarest of achievements: a blockbuster with brains.

As the art kept finding new ways to sneak into my Colgate zone, I found myself making recurrent comparisons to modern cinema. It isn’t just that so much of the painting looked cinematic; the strategies being used are movie strategies. The Horror and Terribilita section, with its beheadings of Holofernes and its decapitations of Goliath, was as violent as a Tarantino movie. Motion and Action, with its knife fights and destroyed temples, was Fast and Furious: The Baroque Years. The dwarfish masked satyrs in Joke and Jest could be extras in Game of Thrones. The undressed Magdalenes in the Love section do what undressed Magdalenes are always there to do. When it comes to getting in our pants, the baroque age seemed to arrive at every strategy first. It’s us, in our first edition.

So yes, for reasons of artistic import and preternatural wayfinding, we definitely need to secure Gentileschi’s The Finding of Moses for the nation. Not only was the artist a living witness to some of the most momentous developments ever to occur in art, he is also a unique connection between baroque Rome and Stuart London.

When he arrived in England in 1626 and began working for George Villiers, the Duke of Buckingham, then, after Villiers was assassinated, for Charles I, the poor man found himself intimately involved in the build-up to the Civil War. And he then succeeded in pushing his increasingly celebrated daughter Artemisia into the same dangerous darkness.

Yet The Finding of Moses betrays none of this. Effortlessly superior to any comparable image produced in Britain at the time, it is elegantly composed, so confident, so advanced, I find it almost impossible to believe it really was painted in London in the 1630s.

What I love most about it — and here we drift once again into the fuzzy realms of baroque emotion — is its transparently Italianate light and mood. Forget the storyline, the baby Moses being rescued from the Nile by the Pharaoh’s daughter: that’s just an excuse. What this painting really is is a lingering memory of Italy by someone who wishes he’d never left.

Where do I send my tenner?