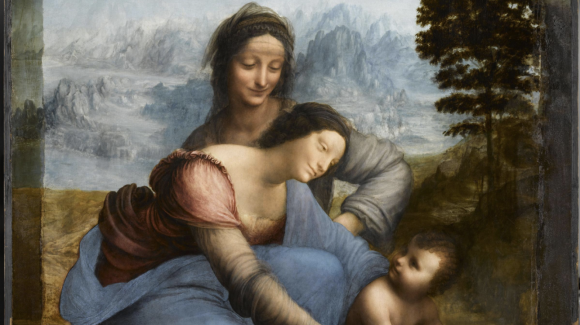 As Leonardo da Vinci was a lover of the natural world, with a hard-core understanding of how nature works, he will not mind if I begin this response to the noisy retrospective that has arrived at the Louvre in Paris by comparing him to a cockroach. Not, of course, in terms of his brainpower, his skills, or his famous handsomeness. No similarities there. But there is one quality that he certainly shares with the unpopular insect: unkillability.

Just as cockroaches can be poisoned, swatted and stamped on, but still they keep coming, so the Leonardo myth will not give us any respite from the Leonardo myth. Five hundred years after his passing, there is still the likelihood that when you open your newspaper tomorrow there will be a silly story in it about the Mona Lisa being a copy, or a man, or Leonardo in drag.

The build-up to the 500th anniversary of his death has seen the invention of a whole new tranche of distractions. Especially regrettable was the unseemly war that erupted over the right to claim his passing as a national event. Who should celebrate most loudly: Italy, the land of his birth in 1452, or France, the land of his death in 1519? The Louvre won, of course, because the Louvre doesn’t do losing. And it’s noticeable that all the paperwork for this show is devoted to a certain Léonard de Vinci, rather than the Leonardo known to the rest of us. Note the spiky little accent aigu.

That said, my heart goes out to Vincent Delieuvin and Louis Frank, the Louvre curators tasked with finding something new to say about art’s most relentlessly raked presence. When a territory has been trampled as furiously as this one, for as long as this, finding a fresh path through it is a mighty challenge. And then there is the shortage of material.

There are only 15 paintings universally agreed to be by Leonardo. Of these definites, the Louvre owns five, so it has a head start in the making of any retrospective. Four are included here, while the fifth, the Mona Lisa, has been left in situ behind bulletproof glass in the terrible circumstances in which we have, these days, to view her. It’s a shame. Putting her in the show would have allowed a fresh viewing in a fresh context.

With so few paintings to work with, the Louvre’s unfortunate curators have had to rely, as most Leonardo shows do, on a substantial helping of his busy, fidgety drawings, as well as a generous selection of efforts by his pupils, a surprisingly untalented bunch, whose achievements are many rungs down the ladder from his. Of course, the drawings are impressive. The science section in particular is crammed with rich examples of Leonardo’s relentless curiosity. He draws birds in flight. He draws new kinds of cannons. He draws water systems and flying machines. The Vitruvian Man, that fabulous image of universal human proportion, has made a rare journey from Venice. Some of the Royal Collection’s best skeletons are here.

The curators do what they can with these engrossing ingredients, and much of what they do they do well. But the show as a whole is underwhelming. In the end, it is beaten by Léonard de Vinci’s most implacable enemy: reality.

One such reality is that not even the Louvre can stock its blockbusters with everything it wants. Eight of the 15 agreed Leonardos are missing. From start to finish, these absences impact importantly on the telling of the story. The first two paintings with which he is associated — the Baptism of Christ, which he painted jointly with his teacher Verrocchio, and the Annunciation, started when he was 18 — are not here. They hang in the Uffizi in Florence, and neither has been lent.

With the absence of a natural beginning, the Louvre has to construct one for itself, which it does by confronting us in the first vista with a mighty Verrocchio bronze of Christ and St Thomas, a thrilling Renaissance sculpture — over- life-size, towering and fierce — that quickens the pulse and roars out an immediate message about the power of art. Unfortunately, it’s a Verrocchio, not a Leonardo. And the ring of beautiful drapery studies that surround it, which are by him, and which certainly show how skilled he was in the capturing of elusive drapery effects and the play of light and shade, are exquisite achievements. But they don’t thump you in the chest as the Verrocchio does. 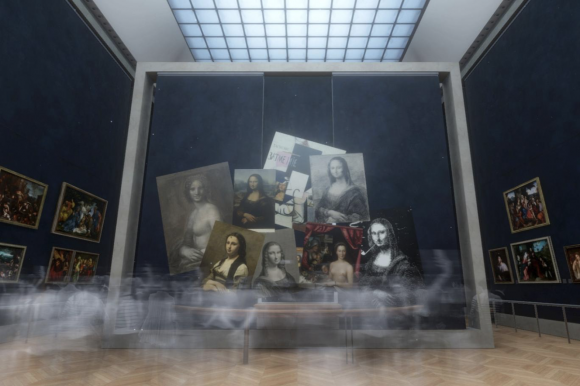 It’s the show’s overwhelming problem. A combination of missing artworks and the overthinking of the storyline has created an event that never comes properly into focus. It’s like looking at Leonardo through someone else’s glasses. The French affection for technology and gizmos doesn’t help. Both the Uffizi Baptism and the Annunciation are represented by looming x-rays, a strategy the show uses for all its missing artworks. These big x-rays, mounted and lit as if they were paintings, are simultaneously informative and irritating. Yes, they fill the gaps, but they also contribute to the blurring. You’ve come for paintings. You get photos.

The sense of a virtual Leonardo is magnified by some curious curatorial decisions. Suddenly we encounter two versions of the Madonna of the Yarnwinder, one from a private collection in America (the so-called Lansdowne Madonna) and the other from the Scottish National Gallery (the so-called Buccleuch Madonna). Both are presumed to be the work of Leonardo and his workshop. Both are also represented by their x-rays. Thus you find yourself in a ring of repeated images, unsure what to notice. Is it the difference between the two paintings? Or is it the difference between the painting and the x-rays?

To find out what the curators are actually trying to say, you need to read the thoroughly French catalogue, for which you’ll probably need a thoroughly French dictionary. Here you’ll discover that their overwhelming ambition — surprise, surprise — is to rediscover Leonardo the painter. All the drawings, all the far-flung science and study, should be seen, argues the catalogue, as an extended preparation for the paintings. In particular, the drawings testify to Leonardo’s fascination with movement, and his obsessive quest to find ways to depict it in painting. The Leonardo we love today, Leonardo the universal genius, was a Leonardo distracted from his clear path.

It’s a cute argument. Probably right. But also exactly the kind of cute and convoluted argument you’d expect to hear from a pair of curators tasked with saying something new about such a twisty subject. My own feeling, a feeling that grew as I stooped around the show, glued to Leonardo’s tiny investigations, is that the argument is bigger than that. What this show seems to do, inadvertently perhaps, is to prove the power of painting. Let’s face it, no one was ever struck down by Stendhal syndrome while examining a diagram of a chest cavity. 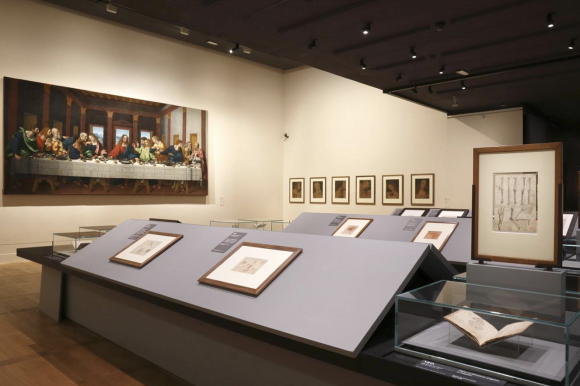 The best moments here come when we step round the corner from the science, and there, at last, is a compelling example of Leonardo’s artistry. One such moment is the appearance of the Louvre’s La Belle Ferronnière, the beauty from the Milanese court who has been superbly cleaned for the show and whose painterly exquisiteness makes up for the absence of the Lady with an Ermine, who stayed in Krakow.

Trumping that moment is the awesome showing of Leonardo’s Virgin and Child with St Anne, a picture that usually hangs in the Louvre’s longest corridor, where the glare does it no favours. This, too, has been cleaned, and the results are staggering. What finesse they reveal. What beautiful physiognomy.

What gorgeous treatment of fabrics. What clever symbolism in the dark chasm above which the perfectly arranged group is balanced.

Leonardo’s greatest painting isn’t the unfortunately absent Mona Lisa, available only in a virtually real comic interlude at the end of this event. It isn’t even the gorgeous Madonna of the Rocks, which is here. No. His finest surviving achievement as an artist is this religious masterclass, filled with light, whose contribution to this strained exhibition is to show up everything else on display and to argue irrefutably for the primacy of painting.