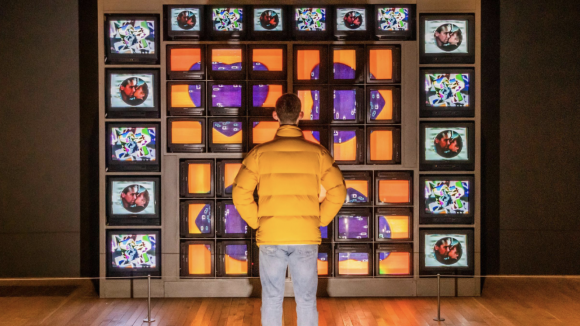 I felt joy when I entered the Nam June Paik retrospective that has arrived at Tate Modern. And two hours later, when I left, I felt it again. But they were different types of joy. The first was an open-hearted pleasure at stepping into a show that was buzzing with noise, colour, electricity, excitement, invention and craziness. The second was the joy of stepping out of it. It was like that moment when your neighbours are having a party, and they finally turn off the music at 4.30am. What a relief.

Paik (1932-2006) was something rare in the story of western art: a powerful oriental presence with an inherently different understanding of cultural norms. In particular, his attitude to new technology — which he loved with a relentless, career-defining enthusiasm — was uncommon at the time. Born in Seoul, he entered the modernist art world in Germany in the late 1950s, and then moved to New York in the 1960s, where he became the master of electronic interference, the king of the cathode-ray tube, the emperor of digital noisiness. When it came to feeling at ease on the “electronic superhighway”, he was way ahead. Indeed, it was he who coined the phrase.

The first big installation we see here, called TV Garden, from 1974, features scores of television sets of different sizes and designs, scattered like flowering plants around a big rockery of fake vegetation. Playing simultaneously on all the monitors is a collage of musical snippets — an oriental drummer, a nude doing the fan dance, the famous cellist Charlotte Moorman playing Saint-Saëns, all snipped together into a joyous cacophony of sound and colour. It’s exciting, and it has no trouble backing up the big claim made in the surrounding captions that, for Paik, technology was as beautiful as nature and that in the future it would replace nature.

These pioneering attitudes had their origins in another of his oriental inheritances: Buddhism. A lifelong Buddhist who never smoked, never drank, never drove a car, he would frequently integrate ancient Buddhist ideas in his ultra-modern technological set-ups. The most famous example, TV Buddha, sits next to TV Garden in the entertaining opening vista. An 18th-century statue of the seated Buddha stares silently at a futuristically round TV monitor on which it sees its own face, relayed live from a video camera trained on it from above its head. I’m not much of a Buddhist, but even I can recognise how ideas of infinite circularity and the stillness of truth are being prompted by this quiet and beautiful piece.

Paik’s faith in technology, allied to his ancient Buddhist concerns and his endemic Korean indifference to what western art should be, propelled him into a madcap voyage of aesthetic exploration in which wonky-looking gadgets search absurdly for eternal truths. Record Shishkebab features a vintage record player with its arm extended vertically so that lots of old records, arranged like a kebab from a Turkish grill joint, can be played by the spectator moving the playing arm from one to the other. I would have loved to have a go. Alas, much of this venerable machinery is too fragile to work. We must make do with admiring its vintage vibe and feeling the fun.

Prepared Piano, from 1962, is an upright piano that has had its keys and strings altered so that anyone playing it ends up making various bangs, cracks and whirrs as they tap down on a keyboard of toy cars, barbed wire and dancing girls. Amazingly, the pianist Manon-Liu Winter appears in an adjacent film, banging out a splendid piece of percussive improvisation on this profoundly unlikely barroom upright. 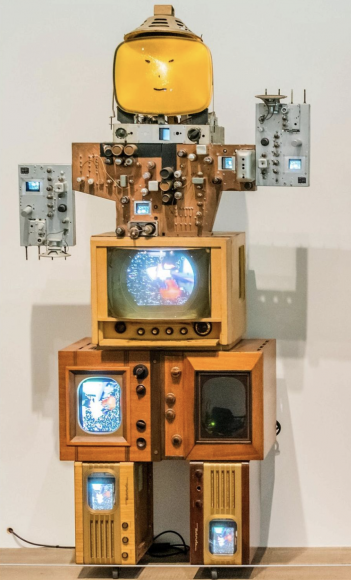 In his youth, Paik had trained in Tokyo as a classical musician, and when he arrived in Munich at the end of the 1950s he soon fell in with Stockhausen and John Cage, with whom he began a series of wacky collaborations. It was also in Germany that he met Joseph Beuys and Wolf Vostell and, in 1962, joined them in the chaotic and characteristically transient art grouping Fluxus: dada, basically, enlarged to the power of 10.

Fluxus art is never easy to show. Made to be “in flux”, it survives mainly in black-and-white photos of extraordinary “aktions”; or as stark documentary literature that has a certain geek-appeal but no hope of properly conveying the anarchic, anti-everything, burn-the-capitalists spirit of the times. It’s a feature of this show, especially in its middle sections, that you really wish you’d been there to witness what Paik and the fluxists began (dis)organising. Alas, we have to make do with dutiful snippets of documentary record. That said, even these manage occasionally to leap off the page and bite you in your sense of bourgeois propriety.

All this feels uncannily prescient. Over and over again at this beeping, flickering event, I found myself staring at the art of today — except that it was made 50 years ago. Paik is rightly acclaimed as the father of video art. He was a key champion as well of audience participation. The TV broadcasts he organised between America and Paris and China are preternaturally early examples of global reach. The other week, I complained about the extreme digital textures of the Turner prize — here they are, being invented. 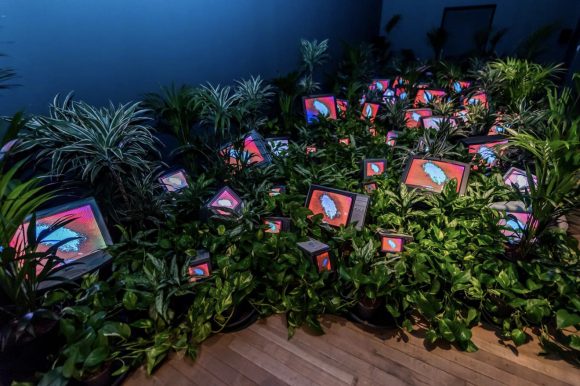 Even in the realm of collaboration, Paik was, again, spectacularly pre-emptive. The collaborations recorded here in rooms devoted to the topless cellist Moorman, and then later to the growling “human coyote” Beuys, are to contemporary art what Adam and Eve are to the line of King David. I don’t think it is too much of an exaggeration to note that everything about Tate Modern — its thrust, its feel, its outlook — seems to be anticipated by the artistic journey laid out for us here. By the time I reached the end of this digital waterfall of a show, I was fully persuaded that Paik was in the Warhol rank when it came to predicting the future; maybe even ahead of Andy.

But, as I said, it was also a relief to get out of there. From the calm and silence of a Tate Modern sofa, it is easier to count the terrible things he did not foresee in his splendid 1960s innocence: how big corporations would sink their greedy teeth into the global marketplace; how TV would use its multichannel reach to flood the world with banality and fake news; how the beautiful global communication he anticipated would be trashed by word trolls and keyboard cowards; how no amount of technological hope would ever successfully disguise the true nature of humanity.