Not many of you will have heard of Bartolome Bermejo. I hadn’t heard of him either until the National Gallery acquired his extraordinary St Michael Triumphs over the Devil in 1995. He wasn’t in my art history lectures. He’s not in Kenneth Clark’s Civilisation. I’ve just looked through my Gombrichs. Nada. As far as the usual story of art is concerned, Bartolome Bermejo didn’t exist.

The ludicrousness of that situation will be made clear to you the instant you step into the small selection of his paintings that has now arrived at the National Gallery. Walking into this fiery and strange little display was, for me, thunderously impactful. My heart went boom boody boom at the sight of the art, and that doesn’t happen often these days.

The usual story of art is, of course, a fabrication. The pen is the power here, and whoever happened to be holding it at the crucial times became the author of the fictions. Even so, to lose an artist of the obvious and fascinating stature of Bermejo is baffling. How do you lose an elephant in a sock drawer?

Part of the problem is the scarcity of his work. There are only about 20 paintings ascribed to him, and these few pictures are scattered across Spain, Italy, Britain, America. We know next to nothing about his life. He seems to have been born in Cordoba in about 1440, and seems to have died in Barcelona in about 1501. He was older than Leonardo, younger than Bellini, about the same age as Botticelli. “Bermejo” is a nickname. It comes from the Spanish word for “ruddy” or “reddish”. Perhaps he had red hair. So he’s a shadow. The only truly tangible evidence of him is his art.

Of the 20 known paintings, seven are now at the National, where they form an indecently powerful cluster. They include two that are signed and three that can be considered his masterpieces. For a one-room event, this modest unveiling packs an enormous wallop.

The centrepiece is the extraordinary St Michael, which has been cleaned and reconsidered for the occasion. It was always an interesting picture: very beautiful, very unusual, a bit weird. It is now all those things, intensified to a new status as one of the most remarkable pictures in the National’s collection.

St Michael, in case you’ve forgotten your religious studies, was the archangel who defeated Satan and expelled him from heaven. He’s big in Christianity, big in Judaism, big in Islam. As a universal signifier of the triumph of good over evil, his symbolic role is huge. You may remember him from Milton’s Paradise Lost, where God puts him at the head of the “flaming warriors” who defeat the Devil. And that is what is going on in the National Gallery’s exquisite Bermejo. Righteousness is defeating sinfulness.

It’s a tall, thin picture, an unusual shape, with lots of vertical energy. St Michael is dressed in golden armour, his sword raised above his head. He’s about to slay Satan, characterised here as a mildly comic dragon with bloodshot eyes and a mouth full of sharky teeth. Whoever Bermejo really was, he clearly liked to have a bit of pictorial fun. There are touches of unexpected humour in all his big religious moments.

Kneeling on the left, watching the mighty vanquishing, is the man who commissioned the picture, Antoni Joan, a knight from Valencia who was hoping to smooth his own passage to heaven by paying for Bermejo’s masterpiece. Everything has been painted with exquisite precision and set against a background of gorgeously worked gold, so the entire picture sparkles like a heavenly jewel. And when you lean in and take a closer look, the magic shoots off the scale.

Blimey, Bermejo could paint. People go on about Leonardo being a great naturalist and all that, but Bermejo, who came first, is already an intoxicating investigator of flowers. And take a look at the acutely observed reflections in St Michael’s armour, including, in his breastplate, a perfect evocation of the heavenly Jerusalem. Who knew that painted observation had reached these heights in 15th-century Spain? 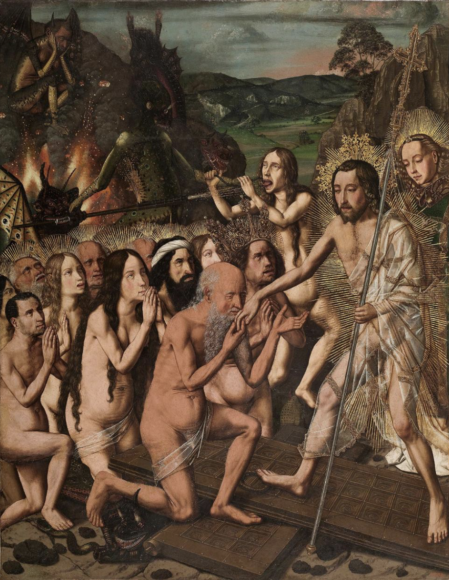 The St Michael is his earliest known picture. It was intended for the church in Tous, a village near Valencia that is now under water, having been flooded to create a reservoir. There’s a photo in the catalogue of the church tower poking out surreally from the waters, a handy metaphor for Bermejo’s career, so much of which has sunk out of sight.

The show also contains his last known work, a dark and doomed pieta from Barcelona Cathedral, which proves immediately that he was a master of big moods as well as tiny details. Painted in about 1490, it presents the dead Christ slumped uncomfortably across his mother’s lap in a dark landscape of rocks, rivers and mountains, in which the earth itself has turned twisty and angsty. Look at the lizards, snakes and butterflies darting about the sobbing land. And when you’ve finished admiring the nature, turn your eyes to the clothes: the Madonna’s velvet cloak; the donor’s leather habit. Painting where he was, when he was, Bermejo had no right to be this good.

He was also excellently different. There’s much talk in the catalogue of the influence on him of Flemish painting styles. At the time, Spain ruled the Netherlands, and there was lots of toing and froing between Madrid and Bruges. Bermejo’s uncanny mastery of oil paints and the illusions of reality they can achieve must certainly have been learnt from Flemish examples. Perhaps he travelled north — my suspicion — or perhaps there were Flemish painters in Spain who could teach him.

Either way, it is the Spanish craziness he brings to his art, the twists in logic, the leaps into weirdness, the un-Flemish qualities, that are so arresting. The St Michael is startling because it fuses two worlds: the abstracted golden world of the background and the precisely observed reality of the details. As for the guffawing dragon — when did evil learn to laugh?

The Despla Pieta, too, is packed with edgy moments of intrusive reality. The dead Christ, for instance, has a hairy chest. How very Spanish. I don’t think I’ve ever seen one before on Jesus. Usually, he’s as smooth-skinned as a newborn baby.

And then there’s that unexpected sense of humour. Rounding off the show is a series of small paintings, predella panels from a bigger altarpiece, telling the story of Christ after the crucifixion. He visits limbo. He pops into paradise. He ascends to heaven for the last time. And in every picture, the hirsute Jesus is surrounded by scenes of Spanish mayhem. Check out the mad array of Bermejo monsters in limbo. And see how the Roman soldier at the resurrection is frantically covering his ears. Who knew that the resurrecting Christ made this much noise when he burst out of the sepulchre?