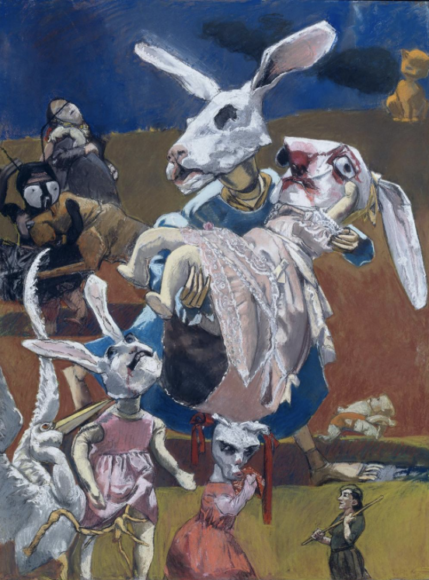 As she’s piled on the years, Paula Rego has managed to acquire a cuddly air. She is now 84, a genuinely venerable artistic figure, a dame of the British Empire, no less, deep into her late style. She has illustrated nursery rhymes and tales of frogs that go a-wooing. She did Jane Eyre, and the murals for the restaurant at the National Gallery. These respectable achievements have softened her presence and added a note of saintliness to it. But don’t let them fool you.

The most telling thing about the telling Rego retrospective that has arrived in Milton Keynes is that it restores to her the psychological darkness that is her birthright. I went into the show happy at the idea of her babysitting my children. I came out dreading what she would do to them when I was away. Crucify them? Spike them with pins? Turn them into rats?

All this is deliberate. The exhibition has set out specifically to adjust the cuddly image. Nominally, it’s a look back at the whole of her career, from 1960, when she was in her twenties, a recent graduate of the Slade School of Art, to today. But in this particular presentation of her progress, every inch of the journey is accompanied by anxieties and snarls. 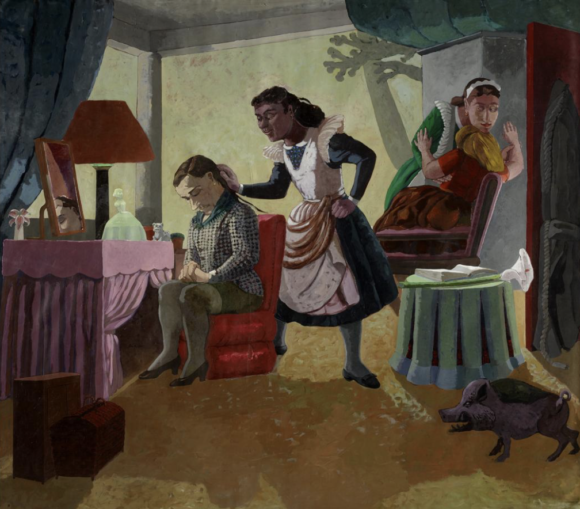 The first shadow to fall across her life was a political one. Born in Lisbon in 1935, Rego spent her early years in a Portugal ruled by the fascist dictator Antonio Salazar, a church-loving Iberian nationalist, in power from 1932 until 1968, whose motto was Deus, Patria e Familia — God, Fatherland and Family. Or, in contemporary terms: Portugal First.

The earliest picture in the show, Salazar Vomiting the Homeland, painted in 1960, is a mix of surrealist blobs and expressionist squidges. The dictator is the red and white blob on the left. The homeland is the bile-coloured squidge curling from his mouth. Thank you to the caption for making this clear. It was easy to miss.

Where previous Rego displays have tiptoed nervously around her Iberian past — how complicated to be a national treasure in two countries at once! — this one plunges you straight into the merda of the Salazar years. Her paintings from the epoch really do look as if they have been smeared out of doo-doo: brown, smudgy, barely controlled. To make evident what the blobs are actually up to in her creepy 1961 evocation of Portugal’s war in Angola, I need only repeat the picture title: When We Had a House in the Country We’d Throw Marvellous Parties and Then We’d Go out and Shoot Negroes.

The astonishing fierceness of these first political pictures jump-starts this event into immediate potency. But another good thing the show does is to skip deftly through the uncertain years that follow. Between 1965 and 1985, Rego was more wife than artist, crackerjacking from style to style while devoting herself mostly to an ailing husband, the painter Victor Willing, who had developed multiple sclerosis.

The present effort takes a shortcut through these years of wifely duty and gets quickly to 1986, where she finds herself again in a series of suddenly realistic paintings of a girl struggling with a dog. In one, the little girl — clearly Rego in schoolgirl cosplay — locks a heavy chain around the beast’s neck. In another, she forces it down onto its back. In a third, she calls in a friend, and the two girls pull pants onto the struggling mutt. Unmissably autobiographical, unmissably about her relationship with the sick Willing, unmissably undertowed by a current of cruelty, these scarily honest pictures confess to anger, first; to guilt, second; to dutifulness, last. Thank God she never decided to become a nurse. “You punish people with drawings,” she once said, and the evidence for that is everywhere in her work.

From now on, the show consists of a succession of masterpieces. It’s the most gripping display of sustained quality in recent British art. Not one picture here would look out of place in a museum. Having found herself at last, at the age of 60 or so, Rego embarks upon a mardi gras of memorable images. Driving them all is a set of brilliant decisions.

The first is to use her husband’s former model, Lila Nunes, as a stand-in for herself. Lila is the drunken lush passed out sexily in her nightie at the foot of a sofa. She’s the Dog Woman sprawled on a coat in the kitchen, her dinner in a bowl beside her. She’s the middle-aged woman having an abortion while still wearing her school uniform, perched on a squalid black bucket like a Girl Guide on a camping holiday.

Lila looks a lot like Paula. She has the same stocky build and swarthy sensuality. By forcing her to dress up as a little girl and pushing her into all these uncomfortable situations, Rego seems to be punishing her lookalike for an unspecified sin, as well as recounting her own life. It is a very spooky strategy.

The second brilliant decision is to work with oil pastels rather than paints. Oil pastels have such a vivid colour presence. They are marvellous for flesh, which they make shiny and Mediterranean, and downright intoxicating for clothes. Like her hero, the Spanish baroque painter Zurbaran, who gets a tribute picture to himself in the show, Rego loves textiles, and she is spectacularly talented at recording their dazzle, shine and twist. The clothes alone make this a show worth seeing.

The third decision is to be unwaveringly true to her emotions. Not once in her post-1990s art does Rego give the impression of holding back or going through the motions. Everything is always out there in all its shocking Iberian rawness. In the eerie triptych called The Pillowman, inspired by Martin McDonagh’s play of the same title, the Bonfire Night dummy being lugged from painting to painting by a troupe of Rego stand-ins is said, in the caption, to represent her father. Yet see how he lies on the bed with his flies open. And see how he slumps in her lap with an erection.

There’s lots of stuff in this show I don’t want to know more about. There’s nothing in this show that isn’t impressive. 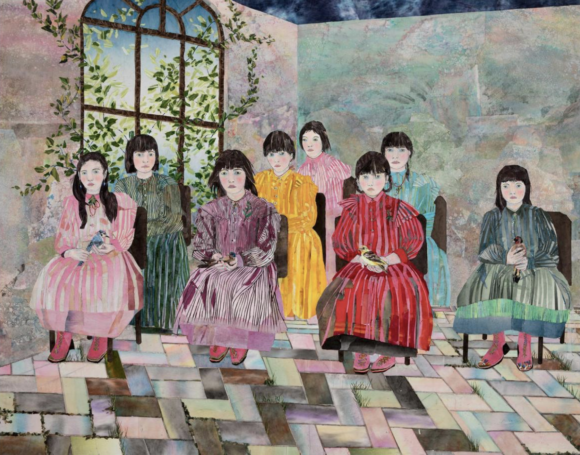 At the Victoria Miro Gallery, Three Women Artists at the other end of their careers are convincing in gentler ways. All three have featured on a daily Instagram site called The Great Women Artists, which trawls the ether for female talent. Why am I so up to date on contemporary distaff aesthetics? Because I follow @thegreatwomenartists.

Maria Berrio is originally from Colombia, but lives in New York. The three pictures she presents here all feature dreamy Colombian girls in traditional costumes, quietly immersed in their own thoughts, as if something good has been lost. From a distance, Berrio’s pictures look like huge watercolours, faded and pale. But when you get close, you see they are actually collages made of delicate Japanese paper in pastel shades. Beautiful.

Caroline Walker is a Scottish painter with peeping-tom habits. She paints women at work — in the office, in a shop — but the women don’t appear to know they are being watched. If a man did these, they’d be voyeuristic. When Walker does them, she manages to foreground a sense of female isolation: Sartrean ennui in a Topshop form.

Flora Yukhnovich has set out to update — I kid you not — the rococo art of Fragonard, Tiepolo and Boucher. The way she does it is to recreate various paintings by these rococo masters, but with the details removed, leaving only the colour schemes and the rhythms. Blow me down if the results are not surprisingly pleasing. Take the Boucher out of Boucher and you end up with some gorgeous shadows.