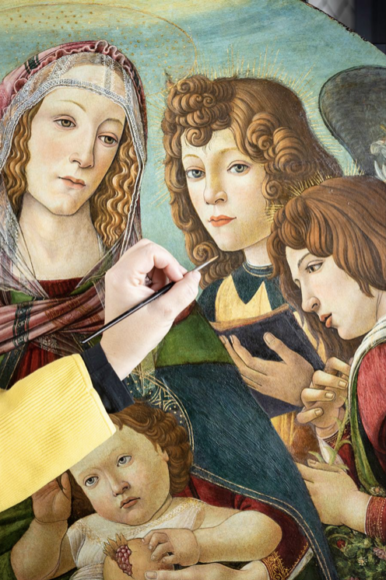 A good thing to do at Easter is to find an Old Master image of the baby Jesus sitting on his mother’s lap, and to see what he is holding. Healthwise, it beats stuffing yourself with chocolate. Brainwise, it widens your understanding and grounds your year. They should sell them in Tesco — hundreds of different baby Jesuses holding hundreds of different things that prefigure Easter.

Hang on a moment, you may be thinking. Isn’t Easter the festival that commemorates Christ’s death on the cross and his resurrection? The baby Jesus is Christmas, isn’t it? Well, yes. That’s basically true. But in the beautiful and endlessly complex treasure house that is Old Master symbolism, an especially rich effort was made to expand the meaning of images of the infant Jesus and to load them with significance. And that’s where Easter comes in.

You must have heard about the “Botticelli” that was rediscovered in Britain a few weeks ago. It was in all the papers. A version of the famous Madonna of the Pomegranate from the Uffizi, it was found by English Heritage in the Wernher Collection and has gone on show at Ranger’s House in Greenwich Park. Previously, it was thought to be a late copy, but it has been ambitiously cleaned, and the cleaning has confirmed that the painting came from the master’s own workshop. 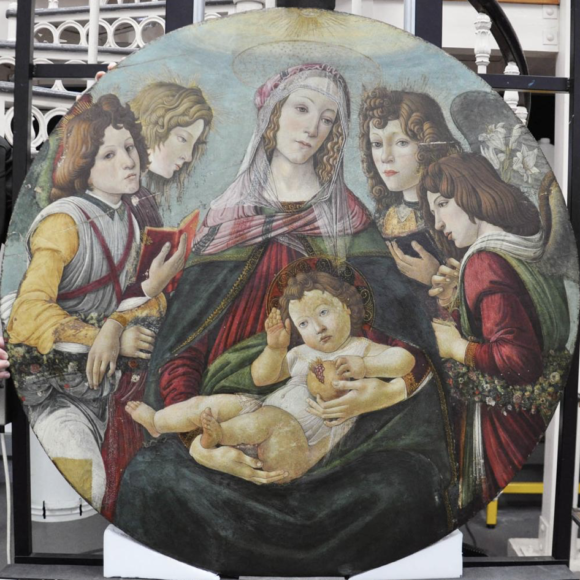 This was really good news. Botticelli (1445-1510) was an unusually sensitive Renaissance maestro who painted some of the loveliest Madonnas on the Old Master spectrum. He also gave us the famous Venus that is one of the most recognisable images in the whole of art. Who doesn’t love Botticelli?

Well, strangely enough, quite a lot of people. The discovery of this Madonna of the Pomegranate forced plenty of grumblers out of the woodwork. It’s not Botticelli, it’s his studio, they moaned on my Twitter feed when I happily posted a picture of the cleaned Madonna. I wasted some electro-breath pointing out that Renaissance studios ran on different lines from studios today, and that it was the norm for popular images to be handed over to assistants for repetition, but I soon lost interest in that particular skirmish. Because something much more interesting popped up as a Twitter topic. The pomegranate. Now you’re talking.

Pomegranates are such marvellous things. I speak not only as a happy eater of them, but also as an enthusiast for their symbolism. Pomegranates are the superfruit of religious symbolism. They’re everywhere. In Buddhist art. In Indian art. In Japanese art. And, of course, in Christian art. And although their meaning changes in its details from location to location, there is also an encouraging agreement about its basics. Everywhere you encounter the pomegranate, its message is essentially positive. When Botticelli thrust a pomegranate into the hands of the baby Jesus, he was telling us everything will be OK.

Punica granatum, to use the Latin name, was introduced into Europe by the Romans, who encountered it in north Africa, in Carthage. The Romans called it the Punic apple for the same reason they called their fight with Hannibal et al the Punic Wars. Our word for it comes from the Latin pomum, meaning apple, and granatum, which means seeded. The word “grenade” comes from the same source.

There have always been two big ideas in pomegranate symbolism. A dark idea and a bright idea; the tint of death and the tint of resurrection. The dark death idea comes from nothing more complicated than its colour. The strong red of the pomegranate and its juices has inevitably been associated with blood. The Japanese call pomegranates “the blood of Buddha”. And you probably know the great Greek myth of Persephone — if you don’t, it’s because our educational system is up the creek and make-up bloggers on YouTube rarely repeat the great storylines of the past.

Persephone was abducted by Hades, the god of the underworld, who took her into his darkness and ravished her. Her mother, Demeter, the goddess of the harvest, searched high and low for her beautiful daughter. Eventually, Helios, the god of the sun, told her where Persephone was being kept, and Zeus, Persephone’s father, forced Hades to release her. Unfortunately, before he set her free, Hades tricked Persephone into eating a pomegranate seed. And because she had tasted the fruit of the underworld, she was obliged to keep returning to the dark for a third of every year. So there you have it: the agricultural year in a nutshell. Persephone is the embodiment of spring. Her three dark months are winter. The rest of the year is a divine cycle of growth and harvest. All because she ate the pomegranate.

When the Christians took over this annual cycle from the pagans, they kept the basic divisions of winter and spring, but changed all the names. In some Old Master art, the forbidden fruit with which Eve tempts Adam in the Garden of Eden is not an apple, but a pomegranate. But that’s rare. More common is the appearance of the pomegranate in Christ’s hand in scenes of him sitting in his mother’s lap. Like the Botticelli.

See how the fruit has split open. How the red seeds are bursting out. It’s actually clearer in the Ranger’s House painting than it is in the magnificent Uffizi original that the broken pomegranate prefigures the wounds of Christ on the cross. The English Heritage version is less sensitively painted, so it looks more like a gaping wound.

It’s also considerably smaller. Where the Uffizi tondo — a round painting — has six angels accompanying the queen of heaven on her divine throne, the English version can only fit in four. The flowers are different, too. In the Uffizi picture, the Madonna is surrounded by roses because she is Rosa Rosarum, the rose of roses, but big roses would upset the scale of this small tondo, so the garlands are filled with tiny flowerettes.

To get back to the pomegranate, though, its task here is to prefigure the resurrection of Christ at Easter: the spring moment. Jesus was born to die for our sins. So, even as a toddler on his mother’s lap, he is making us aware of his upcoming sacrifice by holding up the blood-red pomegranate, broken like a wound. The blessing he gives to us could easily pass for a farewell wave. And his sad, sad mother gazes into the distance, because she knows where his birth must lead.

But wait. Pomegranates are full of seeds. And seeds, bursting out, will grow again into abundance. It is precisely because pomegranates are so full of seeds that in all those cultures in all those places, they came, at root level, to represent fertility. In the Botticelli, their job is not only to prefigure Christ’s death, but also his resurrection. On Good Friday, Christ died on the cross. On Easter Sunday, he rose again.