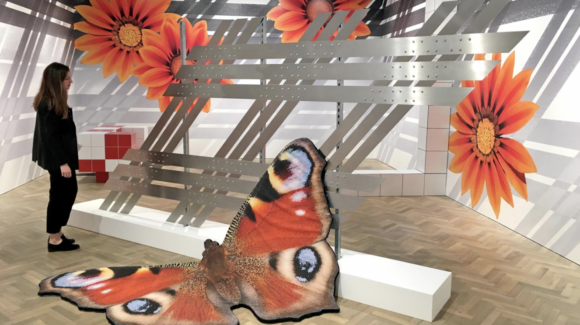 For reasons that shimmer and blur, and never come fully into focus, Anthea Hamilton has titled her excellent new exhibition The Prude. It’s a title that refers specifically, she tells us in one of her texts, to Cecil Vyse, the Rees-Moggish chappy in EM Forster’s A Room with a View who tries and fails to win the love of Lucy Honeychurch. Cecil is a prude. And in recognising what he really is, Lucy finally realises what she really is.

It’s interesting stuff. But it had me scratching my head through the four room-sized installations that constitute the intriguing display. Each room is different. Each has a self-contained mood. Each has nothing at all tangible to do with Cecil Vyse. Not initially, at least.

The show is in two parts, with three smaller installations in the upstairs spaces of the Thomas Dane Gallery, and the bigger one down the road at street level. I started with the smaller shows, which I think was the wrong way round.

In one room, a set of furry wall panels, in macaroon pinks and yellows, surround a platform-heeled boot, carved out of wood. Think Zsa Zsa Gabor’s boudoir decorated with furry slices of Battenberg cake. In another room, two more disco boots, one of white marble, one of black, are raised on showy pedestals before a giant butterfly, sewn and padded out of luxury cloths.

So far, so impenetrable. The sights were unexpected, but they didn’t feel disruptive. The forces that had brought them together seemed to belong to the world of experimental interior design rather than the world of agitated surrealism. Indeed, the furry Battenberg room was rather beautiful, in a Barbarella way. Only the outrageously bad taste of the disco boots seemed fully determined to annoy a Vyse.

Installations of this kind are made for wandering into and ruminating upon. They surround you with clues, but never confront you with solutions. You may remember Hamilton’s work from the 2016 Turner prize, which I thought she should have won. Her contribution, a giant arse emerging from a hole in a brick wall, was the most photographed exhibit in the show, the funniest, the most inventive. Those are all qualities she has carried over into The Prude.

In the gallery down the street, the biggest installation reveals a more discernible chunk of her ambition and allows us to fix more firmly on her ideas. As you walk in, what should loom up above you but one of Robert Crumb’s outrageous Hairy Women, 9ft tall, nipples like rifle barrels, strutting confidently across the wallpaper? The Hairy Women, as I remember it, were sex-mad yetis who devoured any Crumb-sized man they encountered in some of the most outrageously vulgar cartoons ever drawn. Now you mention it, they always wore strutting disco boots, just like the ones preserved on showy pedestals in the earlier rooms.

Hanging opposite the Hairy Woman, rhyming with her unexpectedly, is another giant butterfly. What beautiful wings it has. And what a luxuriously furry thorax!

Vyse isn’t the only male prude for whom these intimate feminine admissions might have proved unsettling. I can’t say I felt too comfortable myself. But they did make me laugh.