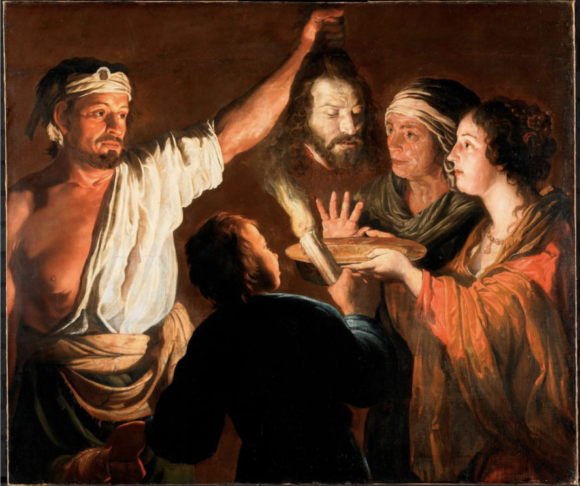 There are many good reasons to visit the Walker Art Gallery, in Liverpool. The Titian is breathtaking. The Rembrandt is haunting. The Turner is sublime. And the Holman Hunt is perhaps the ghastliest Holman Hunt there is. So, if giggling at the pre-Raphaelites is your art pleasure of choice, there is fun to be had at the Walker.

But for the more sentient art lover, determined to sniff out the larger truths of British art, there is one overwhelming reason to make the Liverpool pilgrimage. The Walker has something nowhere else has, or ever can have. Something that thrusts us deep into the fires burning at the centre of Britain’s religious past. The Walker has The Executioner with the Head of John the Baptist, by William Dobson. 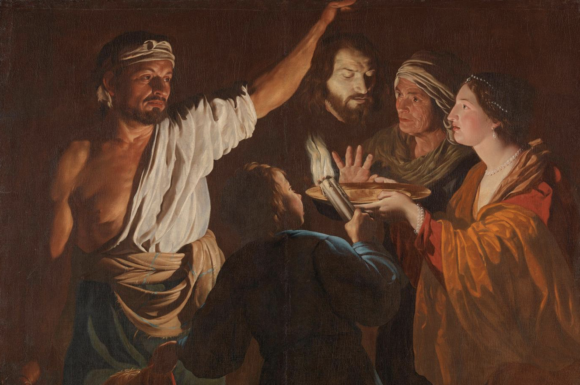 Painted in Oxford in about 1645, slap in the middle of the English Civil War, this Caravaggesque scene of brutal biblical beheading would probably get my vote as the single most unlikely picture in the whole of British art. A Caravaggesque night scene? Painted during the Civil War? By an Englishman? Yup. And, given what happened to Charles I just a few historic moments after it was painted, when the Cromwellians beheaded him, it’s an image loaded with spooky prescience.

It’s actually a copy of an altarpiece by Matthias Stom, a peripatetic Dutch painter who worked in Rome, Naples and Sicily in the 1630s and 1640s, just after Caravaggio’s death. The Stom is now in the National Gallery in London. But how did it get to England so quickly? And what on earth was Dobson doing copying it in the middle of the Civil War?

Those are the questions asked by a fascinating pairing of the two pictures in a small display at the Walker that punches far, far above its weight. What this little show actually does is take us to the heart of a religious conflict that had been tearing Britain apart since the reign of Henry VIII, and which still causes mischief today. In British art, as in British history, there’s a Catholic way and a Protestant way, and the two are not supposed to mix.

Dobson’s scene is set at night. Salome — the woman on the far right — has just danced the Dance of the Seven Veils for King Herod Antipas, who enjoyed her performance so much that he offered to grant her anything she wished as her reward. Salome asks for the head of John the Baptist to be brought to her on a platter. And that’s what’s going on. The sweaty and muscular executioner is holding up the severed head. Salome has the plate in her hands. And her mother, Herodias, former wife of Herod II, current wife of Herod Antipas, is looking on. It was Herodias who wanted the Baptist dead. He’d criticised her divorce from one Herod and her marriage to another.

So it’s complicated stuff. And it’s all made up. The Bible doesn’t mention Salome by name, or the Dance of the Seven Veils. It was actually Oscar Wilde who came up with the famous biblical striptease in his 1891 play. But one of the many marvellous things about the Dobson is that it was painted long before all that. This is the execution of John the Baptist before it became an excuse for a belly dance by Rita Hayworth.

Instead, Dobson’s Salome is part of a tense cast of troubled witnesses gathered claustrophobically around a flickering torch. In Rome, in the 1600s, Caravaggio had taught art to set its scenes at night, because that’s where the imagination can haunt and trouble. In Oxford, in the 1640s, just as the Cavaliers were beginning to lose to the Roundheads, Dobson was employing the same tactics in a religious image that is dark, violent, totally unexpected and totally Popish. Somewhere deep in hell, Henry VIII must have been stomping and roaring with right royal anger at the sight of it. 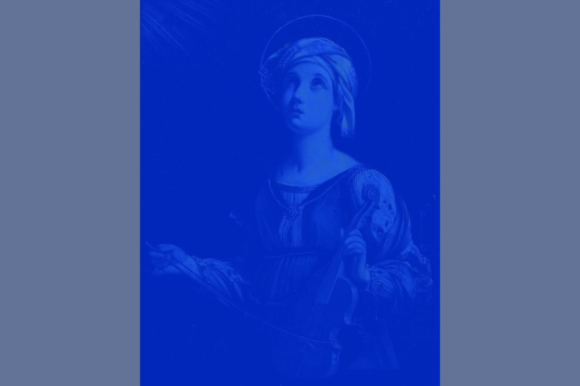 So how come it came to be made? The clue is in the subject. John the Baptist was the patron saint of St John’s College in Oxford, the most Popish of all the colleges. Founded in 1555, during the brief religious interlude of Mary Tudor, St John’s was where recalcitrant Catholics were sent to be educated in the old religion. And in 1645 and 1646, Dobson was recorded living here in plush rooms on the main quad. Why?

Probably to copy the college’s secret stash of freshly acquired Popish art, such as the Stom. What’s marvellous, though, is how Dobson manages to make Stom’s image his own. The most obvious change is in the Salome. Stom’s Salome is an identikit neoclassical presence taken, you feel, from a pattern book. Dobson’s thoughtful dancer is a portrait of someone real and tangible. And, judging by the 17th-century jewellery she sports, she’s someone at court, a portrait not a cutout. The paintwork is livelier than Stom’s as well, with a sense of hurry to it that becomes an insistent feature of Dobson’s Oxford art.

Interestingly, his assistant at St John’s, named in the college records, was a certain “Hesketh”, who was a priest as well as a painter. After the Civil War, Hesketh toured the stately homes of the north of England, painting portraits of recusant Catholics and saying Mass for them in secret.

The full extent of Catholic sympathy at the exiled court in Oxford can only ever be surmised. But on this tantalising evidence, there was more of it going on than we generally recognise.