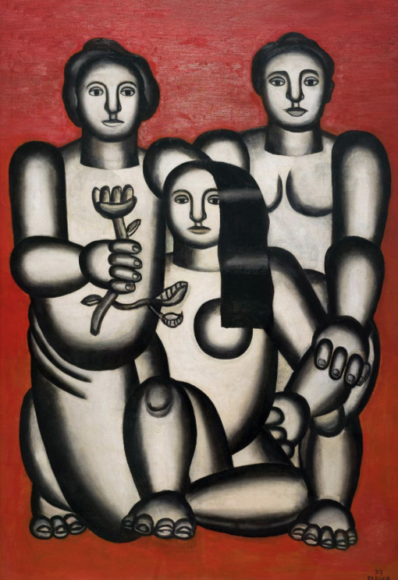 The Tate runs an occasional series of exhibitions called Modern Masters, in which the big hitters of modern art are treated to weighty retrospectives: milestone surveys that feel definitive. It’s something it does well, and the shows at Tate Modern devoted to Gauguin, Gorky, Rothko and, more recently, Rauschenberg can be numbered among the best things the gallery has achieved.

So the first thing to note about Fernand Léger: New Times, New Pleasures is that it isn’t at Tate Modern but at Tate Liverpool, a superb venue — in my estimation the best of the Tates — but in the star system of modern art a less prestigious platform for a defining retrospective than the Brobdingnagian Bankside. Appearing as a Modern Master at Tate Liverpool is like getting your knighthood from Princess Anne when you were expecting the Queen.

In this instance, however, the venue switch feels damningly appropriate, because Joseph Fernand Henri Léger (1881-1955) turns out to be a lighter hitter than we have habitually assumed. Yes, he’s in all the books and always mentioned. But his accomplishments are blurred. Half abstract, half figurative, not quite a cubist, not quite a futurist, nearly a progenitor of pop art, nearly a vociferous socialist, but also a visibly un-socialist painter of bulky French nudes having fun, Léger manages to fall between every stool in all the dimensions he occupies.

He was born into a family of cattle farmers in a dull stretch of rural Normandy. Solid and meaty in a French rural way, he had about him a rumbustiousness that never managed to squeeze itself fully into the precise and elegant geometries of modern art. Watching Léger trying to be a delicate cubist is like watching someone eating sushi with two baguettes.

The present show leaps in on his career in 1914, with a landscape of trees and houses inspired distantly by Cézanne. He’s already in his thirties. There has been no preamble. We get straight down to a thick-fingered cubism in which clusters of trees and roofs are simplified to their basic geometries and colour-coded bluntly in greens and reds: red for the roofs, green for the trees. It’s a style that came to be known, disparagingly, as “tubism”: cubism from which all the complexity has been removed, leaving only the building blocks: nursery-sized and easy to play with.

When Léger left the farm in Normandy, his first hope was to become an architect. It’s what he trained for. But having arrived in Paris in 1900, he was forced to make his living as an architectural draughtsman, and the drawing gradually replaced the designing. In 1907, he visited the Cézanne retrospective at the Salon d’Automne, and that was it. He would follow in Cézanne’s footsteps and look through the flighty surfaces of nature to the profound geometry below. Cézanne did it with subtlety and elegance. Léger preferred a cartoonish version. As I said: tubism.

I tell you all this because the show does not. It cannot. Having hesitated his way to an opening style based on Cézanne, Léger destroyed his earlier art and made it impossible for any look back at his career to commence with an overture. It’s an issue the present display exaggerates by starting with just one example of tubism, then leaping immediately to 1917, the war years. As an opening, it’s confusing, and there’s a sense of missing years. 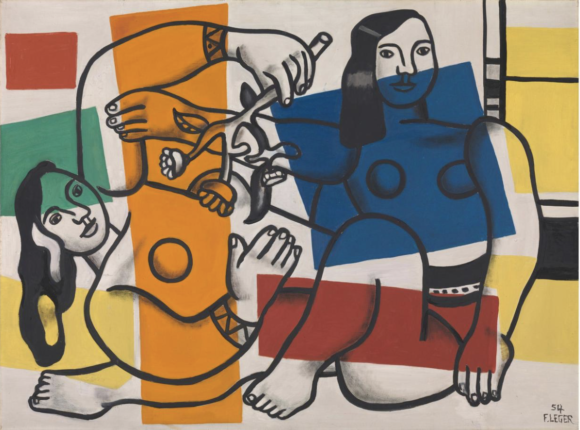 Mind you, the 1917 painting is a cracker, perhaps the best thing in the show. Painted after Léger was gassed in the trenches — he fought at Verdun — it depicts a group of soldiers playing cards. These, though, are not your regular soldiers. These gaming soldats are shiny and metallic, as if they were fathered by the Tin Man in The Wizard of Oz. And the card game they play is recorded in a mechanical sequence that preserves every move.

Inspired by Cézanne’s famous variations on the same subject, Soldiers Playing Cards looks like none of the things that went into its making. It’s not cubism, or futurism, though there are echoes of both. It reminded me most of English vorticism, but with a surprisingly comic note. One Tin Man wears a stovepipe hat that is actually a pipe from a stove; the other wears a metal helmet instead of a bowler. Both are clearly derived from the old boys in the Cézanne, but Léger’s version feels more like a ribbing than an homage.

In the exhibition ahead, his boisterousness often gets in the way. It’s the main reason why his art achieves sublimity so rarely. Colourfulness, yes. Experimentation and liveliness, yes. Cheerfulness, yes. Sublimity, no.

The stop-frame movement of Soldiers Playing Cards is evidence as well of an enthusiasm for the cinema — he was a big fan of Charlie Chaplin movies. It’s an enthusiasm brought fully into the light in a dark room in which is playing a film from 1924 that Léger wrote and directed with Man Ray and the American film maker Dudley Murphy, called Ballet mécanique. I watched it twice — it’s 13 minutes long — and still have no idea what I saw. Faces, machines, French words, smiling teeth, a woman in an orchard, are all cut together at breakneck speed and shoot past you like the view from a high-speed train. Driven by Buster Keaton. The only thing Ballet mécanique is definitely is a film that chases the crazy cut-up rhythms of modern life. Apart from that, it’s anybody’s guess. 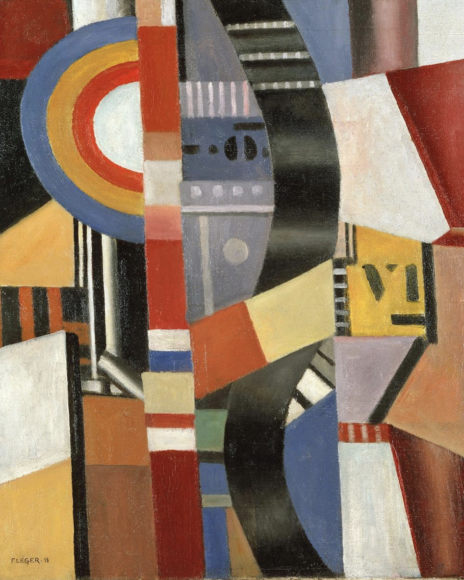 Thus humorous Cézanne turns at a stroke into slapstick dada, and a career that is already difficult to grasp is made slippier still by a show that marches simultaneously forwards, backwards, left, right and at various angles in between. There’s a chronology in there somewhere, but it’s difficult to follow.

If Soldiers Playing Cards is the best painting here, the best room is devoted to his “purist” phase, a selection of gorgeous half-abstracts from the 1920s, produced under the solemn influence of a new architectural buddy, Le Corbusier. Unpacking his architect’s ruler and compass, Léger sets about finding underlying patterns in the sharp shapes and bright sights of the modern city. For once his boisterousness is kept on a leash, and the art often glows with beautiful simplicities.

Less successful is his contribution to the 1937 Exposition Internationale des Arts et Techniques in Paris. It’s the event at which Picasso’s Guernica was unveiled. Léger, meanwhile, working with Charlotte Perriand, produced a giant mural collaged with folk dancers, hunting dogs and the Tour Eiffel: it looks like an unhappy tourist poster grudgingly promoting the French way of life.

From now on, the show grows ragged. In the late 1920s, he had a surrealist phase, but here it pops up after the 1930s. It’s followed by a “return to order” that lasts several decades, in which a troupe of beefy females take over his art until they, too, get shunted out by that most cringe-making of modern-art subjects — the circus.

While Picasso stayed in Paris during the Second World War, going eyeball to eyeball with the invading Nazis, Léger fled to America, where he taught at Yale. Teaching was something he was good at, and the list of his pupils is impressive: Louise Bourgeois, Serge Gainsbourg, Hans Hartung, Sam Francis. His own art, meanwhile, makes no acknowledgment of the war and continues its march of jovial uncertainty. 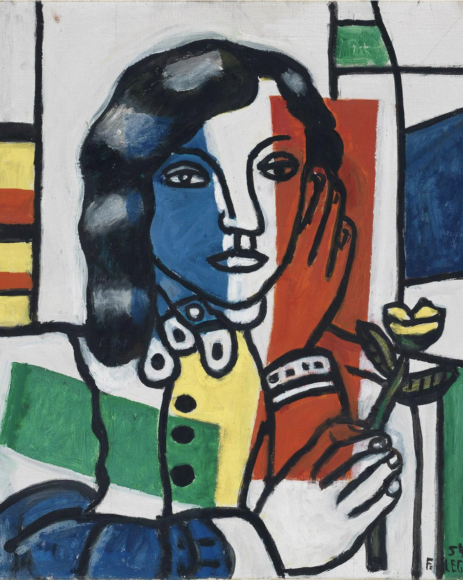 After the war, he joins the Communist Party. So the current curators are keen to understand his insistent cheerfulness in political terms, and to present it as a socialist dialogue with the working man. But on this repetitive evidence it might more honestly be understood as an ingrained flavour. He had always been an admirer of Le Douanier Rousseau, and the older he got, the more Rousseau-like were his moods.

You know those circus strongmen with leotards and pointy moustaches who seem to embody the spirit of French provincial joviality? The inner Fernand Léger is one of those.