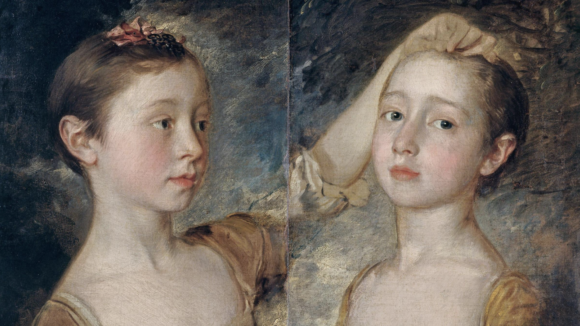 When my daughters were little, I hung a reproduction of Gainsborough’s famous painting of his daughters chasing a butterfly on their bedroom wall. It was one of my favourite pictures in the National Gallery and felt right for obvious reasons. He had two daughters. I have two. He was a doting father. I am a doting father. He wanted to say it with art. I wanted to say it with art, straight to my daughters, every morning when they woke, every night before they fell asleep: I love you and never want you to be hurt.

That is also why Gainsborough put the butterfly in his picture: to add a symbolic meaning. The butterfly has landed on a thistle bush and the younger of his two daughters is about to grab it. But when she does, she will prick her hand. A doting father is warning his offspring about the brevity of innocence and passing on a secret message about the pursuit of pleasure — be careful what you grab! This is not just a portrait, it is also a sublime piece of dad art. 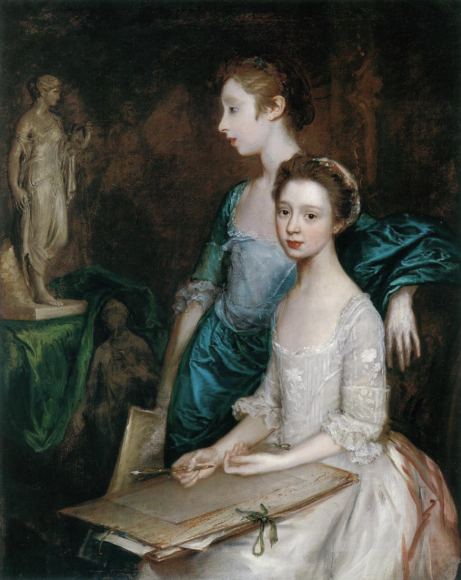 So it’s soppy stuff. Too soppy, perhaps. As soon as my kids were old enough to decorate for themselves, they unstuck the Gainsborough and replaced him with a selection of Pokémon monsters. But I’d like to think something of him soaked into them and will always remain, because in the whole of British art there is no more loving a parental heart or more nimble a painter’s hand than the heart and hand of Thomas Gainsborough (1727-88).

To prove it, the National Portrait Gallery has created a beautiful and touching exhibition called Gainsborough’s Family Album. It contains all the painter’s irresistible portraits of his daughters — there were many — as well as a characterful parade of other members of his family — wife, sisters, brothers, nephews, nieces — sprinkled with gimlet-eyed portrayals of himself growing old. The results feel unusually personal for a selection of 18th-century paintings — the Gainsborough family Christmas! — and the show as a whole does things rococo art is not generally reputed to do: it moves us, involves us, whispers intimacies to us.

That said, I am not sure the exhibition’s organisers will thank me for emphasising the cuddly nature of their achievement. Their ambition, spelt out in captions and catalogue, is to shine a cool light on Gainsborough’s unprecedented cornucopia of family portraits and to understand them as calculated contributions to his social advancement. When he painted his cousin, Reverend Henry Burrough, in 1756, round-faced and porky, it was not to express family love, but to ingratiate himself with the wealthy clerics in the reverend’s circle and drum up some priestly business. In the 1770s, he copied a portrait of his brother Humphrey, a pastor in Henley-on-Thames, because someone in the congregation commissioned it. Where there’s blood, there’s bacon.

I’m sure that’s right. But the thing that makes Gainsborough so special, the quality he shares with no other British giant, is an emotional independence that privileges his art over any social circumstance. Even when he is working most dutifully — those “damned faces”, he moaned of his portrait business — what shines through is a rare passion for the process of painting, an intoxication with the ways of the brush.

Most of the portraits here, gathered from far-flung corners of the museum world, have a wispy freedom to them. Many are unfinished, because with family you don’t need to finish. Painting brothers and cousins is clearly less burdensome than painting duchesses and dukes. And the less pressure there is from clients on his adventurous touch, the more adventurous it becomes.

His brothers and cousins get decent attention, but the really intense involvement is with his wife and daughters. The first family portrait we see — from 1747, when he was 20 and living in Ipswich — shows him with his wife, Margaret, striking relaxed rural poses in the Suffolk countryside as if they were land-owning gentry, rather than a bum-fluffed artist starting out, and his new wife.

There’s a child, too, in this charming conversation piece, scuttling about the legs of her mum. It’s their first daughter, Mary, who, we learn, a tad shockingly, was conceived out of wedlock and died at the age of two. It’s a jarring domestic truth. And it seems somehow to trump the adjacent curatorial instruction that we notice how Gainsborough has elevated himself and his family in this pretty outdoor idyll by showing them higher up the social ladder than they actually were.

These are observations the organisers are keen to make. The journey they seek to take us on is a career journey — from Ipswich, where he started out, to Bath, where he grew famous, to London, where he triumphed. At every step of his progress, Gainsborough used his family as cheap models to advertise his talents and try out different approaches. 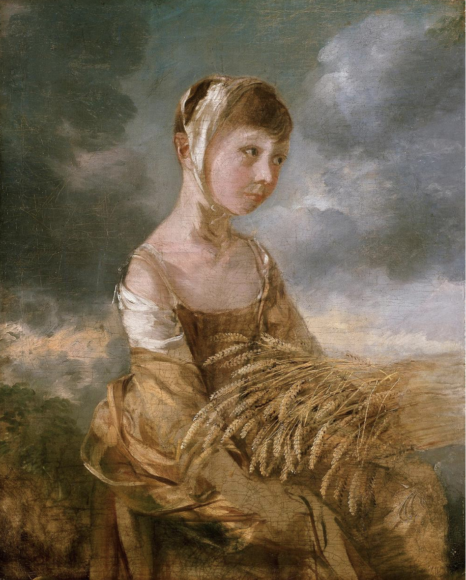 In Bath, where he moved in 1759 to enlarge his reputation, he painted a delightful self-portrait in which he sports a fashionable smock to show his new sitters how elegant and au courant he could make them appear. For the ladies, he unveiled a shimmering portrait of his wife, wrapped in white silk, trying to look delicate and rococo. The pictures hung opposite each other in his grand new house, where their job was to impress visitors with first-hand examples. Clients would be met at the door by his real wife and could then compare her with the painted version.

These are interesting observations. But they don’t feel like the most pressing story. More telling still is how Mrs Gainsborough is a touch too solid to pass easily for a rococo beauty, and how her husband’s touch is too honest to hide her charming Suffolk solidity. How much business would she really have drummed up?

When we get to the show’s best and most spectacular moments — the moments devoted to his irresistible portrayals of his daughters — no amount of curatorial heartlessness can blind us to the soppiness of Gainsborough’s dad art. Where the rest of us might measure our children’s growth by marking their height on a doorway, he painted his girls recurrently as they became women, thereby granting them a glorious immortality. What a gift.

His second daughter, also called Mary, and the youngest one, Margaret, turn up in various guises and formats. In Bath, the sweet toddlers who had chased a butterfly in Suffolk become awkward teenagers in a shy double portrait that shows them training to be artists, as their father wished. In fashionable London, they try to become high-society versions of themselves, sparkling in silks, strolling through a park, in a glamorous full-length that hopes to elevate their social status to the same rank as the surrounding duchesses. But we recognise them too readily from their previous selves. So they can’t quite pull it off.

This repetition of the two daughters in picture after picture is surely more than convenience. There’s a psychological intensity to their portrayal, a magnetic closeness, which the painter has noticed and framed. Outside the boundaries of this show, Mary and Margaret had tragic lives. Mary had mental problems and suffered from delusions. Her marriage to a German oboe player — Johann Christian Fischer — was disastrous and ended after six months. Margaret, meanwhile, never married. She devoted her life to her sister and, when she died, poor Mary was installed in an asylum, where she passed away.

Gainsborough painted Fischer, the disastrous husband, in an imposing full-length that is in the Royal Collection, but has not been included here. Why? Has the missing son-in-law been redacted from the story because his presence might have sidetracked the exhibition into a darker family history than the one it seeks to illuminate?

Perhaps. Or maybe it just wasn’t available. What’s certain is that no amount of curatorial calmness can camouflage the warmth, intimacy, involvement and invention that Gainsborough brought to his marvellous family art.