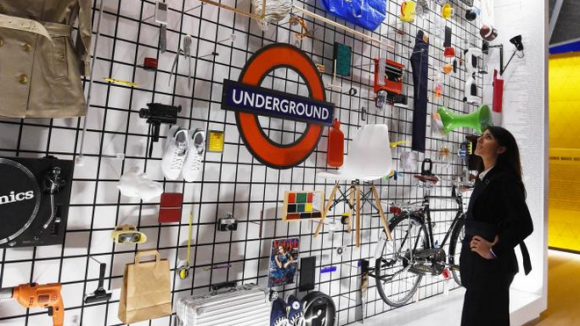 There has been a lot of foreplay. For months, nay years, the Design Museum has been teasing us with hints, promises and prospects as it readied itself for the opening of its new doors at its new location in the old Commonwealth Institute in Kensington. Since design is a process by which the inchoate is given shape, let us call what the Design Museum has been inflicting upon us by its most tangible name: hype.

Those of us who remember the old Design Museum, crammed into a banana warehouse by the Thames, cannot be surprised by the move. It was a common jest that the Tower Bridge warehouse was badly designed. Too poky, too tinny, it never lost the air of a rickety conversion.

What it did have, though, was a sense of purpose. Founded by Terence Conran in 1989 to educate us in the values of modern design, the old Deseum saw things chiefly in terms of useful and beautiful objects as it guided the nation’s final exodus from the coal-fire-and-outside-loo era and its arrival at the cool new epoch of slim white phones and touchscreen sat navs. Simplicity, clarity, invention: the conversion may have been rickety, but its contents offered something solid.

So the first thing to say about the new Design Museum is that this sense of solidity is gone. From the moment you enter this big top of a building, all walls and roof, with no middle, you float in a sea of emptiness. The old Commonwealth Institute was middle-less, too, but it never felt like a problem. Now, the looming central vacuum seems absurdly wasteful. You could house 500 refugees in this mega-foyer.

Where the architecture leads, the exhibits follow. The two shows with which the new museum has chosen to open its exhibiting account are both characterised by a sense of virtuality. Design used to feel as if it referred to something you could hold in your hands and touch. Today, it takes place out there, in the electro-cosmos, in a world of concepts, readings and measurements.

Fear and Love, the first of the opening shows, has commissioned 11 international design stars to create installations that point to our design future. Madeline Gannon, from Pittsburgh, confronts us with a long-necked robot called Mimus, which sits in a glass cage and follows you around with its head like a paralysed giraffe in a zoo. The point of Mimus, says its creator, is to make you feel comfortable in the presence of robots. It didn’t work for me. As Mimus’s interest in my presence refused to subside, a process of anti-anthropomorphism set in, and the robot’s humanising curiosity began to feel increasingly spooky.

At least Mimus exists. Most of the other installations are flickering mixes of film and video, or text-heavy documentary explorations of hobby subjects that could sit happily in the Turner prize. City of Nomads is a traditional Mongolian yurt refashioned by the Rural Urban Framework into a nomadic cinema in which you can watch films about Mongolian yurts. Andres Jaque, from New York and Madrid, gives us a palm-top exploration of the rise of dating apps, especially Grindr. Who needs a city, he asks, when we can connect intimately in cyberspace.

Thus the hopefully futuristic is combined with the tooth-gratingly pretentious. In the latter category, the nadir is conquered by Neri Oxman, “the Sony Corporation career development professor and associate professor of media arts and sciences” at the MIT Media Lab in Boston, who presents us with Vespers, an installation in which she explores the futuristic potential of the death mask. Using state-of-the-art, ultra-high-definition 3D printing, she has created three shiny rows of what look like monster heads for an episode of Doctor Who.

Interestingly, only one of the 11 design stars, the floaty-clothes designer Hussein Chalayan, is British. If you are a Leaver, the new Deseum is categorically not the place for you. Everything on show in Fear and Love is predicated on the notion of a global interchangeability. The old Conran notion, the Habitat notion, of importing the best of French or Italian design, and learning from it, has been replaced here by something closer to the Hunger Games model. It’s as if there exists above us a global platform from which the gods of design are shaping our future. As a hardened Remainer, I can’t say I feel anything but disquiet at the thought of the world falling into the hands of Oxman. I don’t want to look like Björk!

Paradoxically, another design trend picked out in the new displays is the reuse or rebirth of traditional crafts. We saw it in the yurt cinema, crafted chunkily from Mongolian felt, and it’s a feature of many entries in the annual Designs of the Year exhibition, the second of the Deseum’s opening shows.

The Tokyo Tribal range has been created by basket weavers in the Philippines, who provided the padding for a set of sleek black chairs made from reconstituted volcanic ash thrown up by the eruption of Mount Pinatubo in 1991. The Mexican fashion brand Yakampot have all their clothes hand-woven by indigenous women in far-flung communities. I’d like to approve wholeheartedly of this rampant Ai Weiwei-ism. But the image keeps floating into my thoughts of designer sedans pulling up outside straw huts, of orders being briskly placed, and of the sedans pissing off quickly back to the city.

More offensive still, because it is a crime against reason, is the taste for objects designed to look as if they are not designed at all. Thus Species II, from a creative grouping that produces “furniture that is removed from the ideas of comfort”, is an armchair that looks like a mountain range. Even worse is Adaptive Manufacturing, a series of wonky pots, created, you’d think, by chucking clay over your shoulder, but actually the product of a 3D printer “programmed by a software algorithm that acts like a script”.

With more than 70 nominations, ranging from David Bowie’s last album to Tate Modern’s new extension, the 2016 selection darts about all over the place as it seeks, hopelessly, to decide what in this blur of techno-creativity constitutes a good design. Another noticed trend is the taste for social engineering. In the old days, designers wanted to make their products better. Today, they want to make the world better. Thus Refugee Republic is a digital Syrian refugee camp that can be explored interactively by gliding around it with a mouse. In which parallel reality can that ever have seemed like a good idea?

Spacewise, the Design Museum has tripled in size. But if the reconditioned building is as big as a Smeg refrigerator, then the new exhibition spaces are as small as a packet of Swan matches. Stepping again into the gigantically useless foyer, it occurred to me that the old modernist principle of form following function was being excellently applied here. The design world is clearly a bubble. And this bubble of a building is the perfect place for it.