Robert Rauschenberg is revered in the US. Now, finally, the rest of us can see why 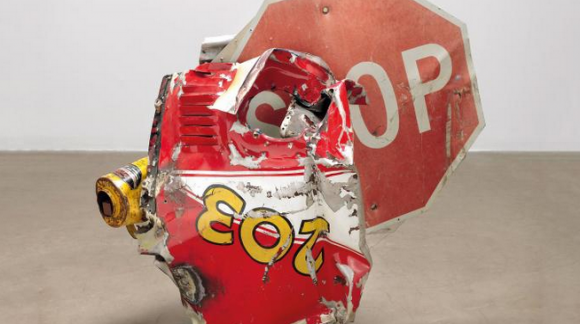 Robert Rauschenberg (1925-2008) has habitually been presented to us as one of the giants of American art. Not quite up there with the Pollocks and the Warhols, perhaps, but just half a step down, with Philip Guston, Jasper Johns, Georgia O’Keeffe. The Americans see him as the bridge between abstract expressionism and pop art, a key interstitial presence who completed one momentous national phase and began another. For the rest of us, however, coming to reasonable conclusions about him has been tricky.

The chief problem is access to his art. There isn’t much. His works might be two-a-dime on his side of the pond, but on our side, they are rare. The Tate collection is notably thin on examples. And you have to travel to a ridiculous number of European galleries to gain a half-decent sense of him. His most famous work, the notorious “combine” with a stuffed goat, called Monogram, is in the Moderna Museet in Stockholm, hardly a bucket-list destination.

Then there is the added problem of reproducibility. Unlike Warhol, say, Rauschenberg doesn’t transfer easily to the magazine page. His output is too handmade, too messy, too unfixed. The stuffed goat has become his signature work chiefly because, I suggest, it is just about the only Rauschenberg that reproduces legibly.

Most visitors to Tate Modern’s Rauschenberg retrospective will arrive, therefore, as I did — aware of his lofty reputation, but unaware of his true achievements. How good was he really? Did he do what they said he did? Did it all add up, as his folks might put it, to a hill of beans?

We begin, confusingly, with a room that feels as if it has leapt out of nowhere. No juvenilia. No build-up. No transition from figurative to abstract. Instead, we are immediately in the presence of a confident, nay cocky, artist who has completed his early mutations and is attacking us from all sides with a bewildering array of approaches. He’s a photographer. He’s a painter. He’s a sculptor. He makes monochrome white pictures. He makes monochrome black pictures. He’s an action painter and a performance artist. Dammit, he even drives a car across 20 sheets of paper and makes art with its tyres! There are enough cocky beginnings in this first room to launch 10 careers. Is there, though, a sense of a true Rauschenberg?

Actually, I think there is. It’s an identity constructed not with outlines, but with tones. Everything in the opening room is black and white — the photos, the paintings, the tyre marks. This particular black and white, though, has no sense of austerity about it. It’s a black and white that feels soft and poetic. The long unravelling tyre mark, for instance, in fact made by Rauschenberg’s pal John Cage, driving his Model A Ford across the paper, feels like a music score or a Japanese scroll. As you follow it along the wall, its spindly presence becomes calligraphic, as if something charming is being told to you in the native American language of the tyre. 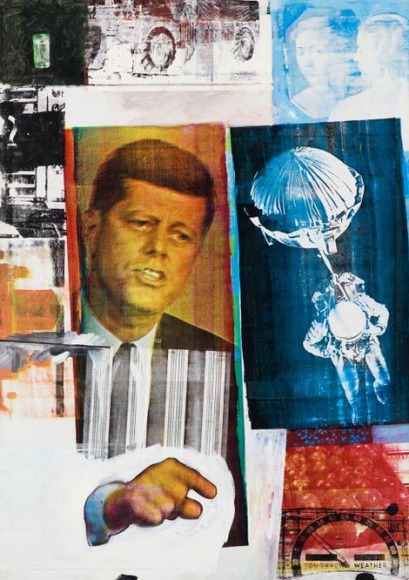 From here until the end, nothing in Rauschenberg’s output becomes fully evident. I loved Cage’s description of the completely white painting in the first room as “an airport for lights, shadows and particles”. It’s a description that also fits the notorious work from 1953 known as Erased de Kooning Drawing, a genuine drawing by Willem de Kooning that Rauschenberg carefully rubbed out (it apparently took him a month) and returned to the smudgy whites of the paper. Always presented as an aggressive act — de Kooning, the abstract expressionist, eradicated from the story so that a new story could begin — it feels like nothing of the kind. Soft, floaty, shadowy, Erased de Kooning Drawing is another of the poetic explorations of black and white that begin this engrossing retrospective so atmospherically.

What you don’t feel, here or later, is anything brash. Emotionally, Rauschenberg is with the ab exes, not the Warhols. From the start, his art is warm, personal, soppy. In the second room, when he begins using mass-market imagery drawn from comic books and newspapers — stuck to the picture, painted over — he does so with a note of nostalgia, as if the faded clippings and curled-up headlines are being used to mark the passing of time, not to celebrate the dazzle of the present.

Colour arrives in his output not with a bang, but with lots of scratching and squelching. The Red Paintings of 1953-54 are abstract expressionist dribblings scrawled across messy accumulations of domestic rags. The famous combines, a year later, combine messy painting with messy sculpture. Here’s a typical list of materials for a wall piece made in 1955, called Bed: “Oil, pencil, toothpaste, and red fingernail polish on pillow, quilt (previously owned by the artist Dorothea Rockburne), and bedsheet mounted on wood supports”. All the way through the show, there is fun to be had reading the labels and ticking off the unlikely substances from which Rauschenberg created his art: from socks to trousers, from umbrellas to bathtubs. 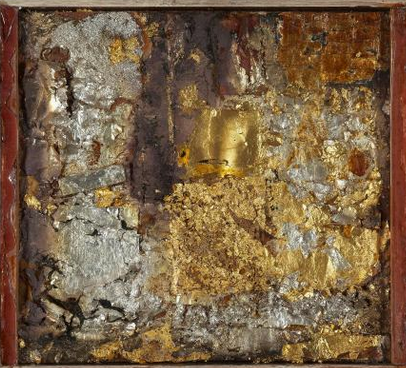 The results of all this furious splattering of unprepossessing materials, however, never feel destructive or aggressive. By pioneering the making of art out of humble materials, Rauschenberg is, I think, trying to cut the crap: searching for authenticity. He is also — and this could be an accident — leaving the mood of his work in the hands of time. And time has duly softened and poeticised it with fadings and crumplings. Even the notorious Monogram, lent by its home museum in Sweden for the first time in 50 years, strikes you as a sweet and battered nanny goat, rather than the horned beast I was expecting.

Arranged more or less chronologically, the show becomes tangibly political when it reaches the 1960s and the face of John F Kennedy begins to haunt the busy messes of Rauschenberg’s screen prints. They were produced at exactly the same time as Warhol’s screen prints, but how different they are in tone. Surrounded by moon landings and Vietnam choppers, Kennedy’s face floats through gloomy flashbacks whose organising principle seems to have been learnt from a bad dream: ie, there isn’t one. In the corners, there is often a snatch of Rubens’s beautiful Venus at a Mirror, a painting in which Venus turns her back on us at the front, but then studies us intently from her reflection in the mirror. Her task, you feel, is to yank us into the action and make the picture’s sad reality our sad reality.

Thus the show progresses in roomfuls of like-minded works that harbour crafty ambitions to surprise us. Come round one corner and there’s an extraordinary sculpture from 1968-71, called Mud Muse, which looks like an Icelandic geyser farting blobs of hot mud into the air. Come round another and you’re in a junkyard full of iron tubs and bits of old car, decaying heroically to the sound of an all-American radio station.

The fierceness of Rauschenberg’s creativity, the way it never lets up or takes an easy path, is constantly impressive.

As is his endless experimentation with methods and materials. The late works, especially the Gluts, a series of sculptures made out of crushed and twisted bits of signage, some produced when he was in his seventies, are as fierce and fiercely American as anything that precedes them. Rauschenberg, you feel, never put his feet up.

Lots of skilful exhibition-making has gone into creating that impression. His messy and inchoate talents can never have marched forward as efficiently as this. It’s an illusion, therefore, but one that, like Venus’s face in the mirror, feels like an intense version of the truth.