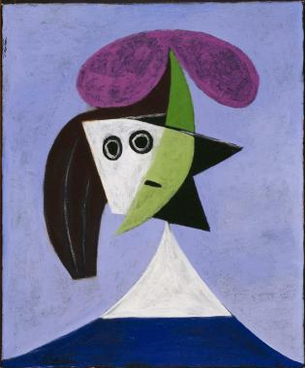 Portraiture is a deceptive business. On its most basic level, it is the record of a likeness, a humble act of mimicry. But on every level above basic, all the way up to genius, which is to say Picasso’s level, portraiture becomes increasingly complex in its thrusts and possibilities.

For Picasso, at the top of his game, it involved the dismantling of an identity into its component parts, the throwing away of the unnecessary bits and the recreation of that identity in a new order. We call it cubism, but triangulism would have been as accurate, and then, later, circlism. Think of him perhaps as a mechanic who takes a car apart, gets rid of the pieces that aren’t needed for it to go, then rebuilds it to his own design. But — and this is the big “but” — the new car is still unmistakably the old car! That’s what Picasso does, some of the time.

Other times he does other things, lots of them, as a whistling journey through his wares as a portraitist at the National Portrait Gallery makes obvious. In its briskness, Picasso Portraits might almost be likened to one of his own creations, because it, too, has no flab in it, no repetitions, just the essential information delivered in vivid flashes on a transcontinental hurtle from one end of his career to the other.

Never having to strive to achieve a likeness was, from the off, a huge advantage. All Picasso ever had to do was trust his hand, as the first scribbles we encounter here, early work from his Barcelona years, immediately prove. With other portrait painters — with, say, Lucian Freud — the achievement of a likeness constituted most of the struggle. Think of the sheer effortfulness of Freud’s awful portrait of the Queen, the result of more than a year’s worth of sittings. Picasso could have painted 100 portraits in that time, all of which would have looked more like her.

The cheeky little monkey with a brush behind its ear we encounter at the start of this parade isn’t a monkey, it’s a self-portrait, a scampering Picasso who has given his features a simian makeover in a drawing on a scrap of paper tablecloth that must have taken him all of 30 seconds. In all of art, there was never a line as infallible at speed as Picasso’s. That’s why the quick drawings we see here on scraps of tablecloth, in the corners of notebooks, on the pages of magazines, are so eminently exhibitable. They are creations, not sketches.

When achieving a likeness is no effort, where does your effort go? That is the meta-query of this display, in which no two stretches are alike. At first, with the cheeky monkey, the effort went into having fun. Organised jointly with the Picasso Museum in Barcelona, the show is especially strong on the years before his departure for Paris in 1904. In fin-de-siècle Barcelona, Picasso’s gift for caricature and innate boisterousness made him a lively witness.

There’s Angel Fernandez de Soto casually pleasuring a naked prostitute while puffing on his pipe. And who’s that strolling among the topless bar girls in his top hat and coat? The eyes give him away instantly. Two specks of coal. That’s Picasso. Or one of his versions. Later on, he pops up in full rococo costume, complete with white wig and cravat. Again, the coal-black eyes. And at the end of the show, in his final portrait, drawn when he was 90, he’s just a skull with two holes in the sockets, but the fiercely staring holes are, once more, unmistakable.

So his default talent — his default genius — was for mark-making and reduction. As the show hurtles through his frantic career, we encounter assorted friends and lovers whom he reduced so brilliantly to their basic signs. If he himself was a pair of fiercely staring eyes, his first Parisian love, Fernande Olivier, who gets a room to herself, was a head held at a melancholy angle and a cascade of wrinkly hair. Whether she was depicted realistically in washes of floaty black, or sculpted cubistically in forms opened up with a can-opener, or painted in dreamy planes of brown, Fernande was always recognisable through the sad angle of her head.

The room devoted to Olga Khokhlova, his first wife, is immediately exciting. It features two of his most superbly realistic portrayals of her alongside one of his most radical reductions. Nowhere else in the show is the sense of Picasso switching effortlessly between modes as obvious as here. Olga usually gets a bad press as a screaming harridan who forced him into a posh life that did not suit him, but the tenderness of his first portrayals of her is tangible, and the surprising home movies that are also included — who knew Picasso made home movies in his garden? — record her as an elegant, happy and delightful presence.

In between the rooms devoted to single sitters, the show runs through a remarkable address book characterised by a disunity of styles. Stravinsky is stern and angular, as if his image has been calculated with a ruler and compass. But Poulenc is smiley and blobby, with a nose a walrus might envy.

The concluding room, which speed-dates its way through the final two thirds of Picasso’s life, is dominated again by his women. All the way through the show, I found myself wishing for more, but nowhere was this truer than in this infuriating final stretch, where Marie-Thérèse Walter, Nusch Eluard, Dora Maar, Françoise Gilot and Jacqueline Roque pop up, take a bow, then pop out again. It’s not the show’s fault he did so much, so quickly, but the eventual effect on most of its presences is that they feel short-changed.

That said, there is a plus side to having so many sitters crammed into so tight a space: it forces you to notice how differently he encapsulated them. And how the shifting between moods and personas was achieved not by changing poses or capturing expressions or controlling the light, as others did it, but by brilliantly inventive mark-making. With one, his line is gentle and rounded. With another, it is pointy and pinched. Here, the paint is ethereal. There, it is splodgy. In Picasso’s portraiture, message and manner were fused in a way that was ultimately unique.

At the White Cube Gallery in Bermondsey, Antony Gormley is also treating us to an investigation of humanity that has many styles. And he, too, does it rather brilliantly. Breaking down the cavernous spaces into a suite of 15 smaller “chambers”, he fills each miniaturised gallery with a variation on his usual theme: his own body. This, though, is not instantly obvious, because instead of the familiar Gormley munchkins of old, the lead casts made of his naked self, we get a set of ambiguous geometric shapes, in various materials, that reveal their figural identity very, very slowly.

It takes a lot of staring before you recognise the seated figure hidden within the tottering geometry of a huge set of concrete blocks. In another chamber, there’s a sculpture to walk through, and one that consists of hundreds of Lego-style figurettes crammed across the floor like refugees in a makeshift sports hall.

Called Fit, the show as a whole feels as if it is investigating not the body per se, but the different ways in which bodies relate to the rooms in which they find themselves: how our shapes and dimensions abut against our walls and our ceilings.

What’s good here, though, is that this clever conceptual underpinning never seeks to eliminate the sensuality of the human figure. A reclining nude in a Henry Moore-style pose is made of hard squares of steel, but, miraculously, an air of languid repose has somehow survived the transformation.