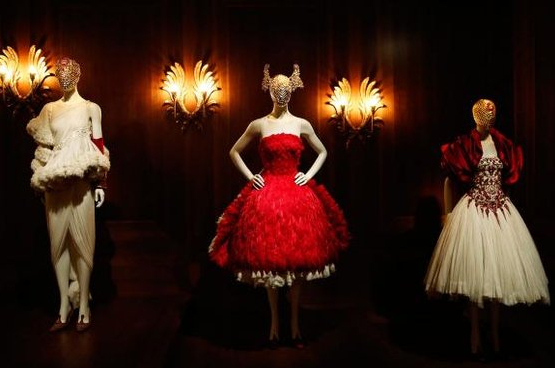 Looking up the word “fashion” in my Shorter Oxford English Dictionary, having just emerged from the multisensory orgy of enraptured toggery that is Savage Beauty, the tribute to Alexander McQueen now throbbing busily at the V&A, I was surprised to find that none of the listed definitions corresponded with what I thought I knew. What I expected to find was something along the lines of — fashion: n the making of clothes, particularly in the latest style. But it just wasn’t there. “Fashion” was defined as a manner of performance, a look, a way of life, a shape, as the latest and most admired style, but the specific relationship to the making and selling of clothes didn’t come into it.

“So what?” you’ll be thinking. Waldemar needs a new dictionary? But it isn’t just that. The reason I was looking it up in the first place was because the McQueen show, from about a third of the way in, seems barely to be about clothes at all. It’s about sadomasochism, ghosts, Darwin and unreality. About impact, drama, extravagance and presentation. About butterflies, birds, crocodiles and gazelles. The clothes are in there somewhere, yes, but they seem to be part of something bigger. Something doomier.

This doominess begins with a giant portrait of McQueen looming cultishly in a dark vestibule. It reminded me of the portraits you see in Mormon temples of the “prophet” Joseph Smith, except that Smith is always smiling, while McQueen is as unhappy as an undertaker on a wet Monday. I felt like reaching into the ghostly blackness and giving him a good squeeze. Cheer up. You’re the guy who invented the “bumster”. You’ve got outlets in LA, Milan, New York and Vegas. Why the Faustian terror?

Having launched itself in twilight, the display ahead never really leaves it. Despite the incessant referencing of nature that goes on in McQueen’s work — its shapes and textures, inventions and colours — never once do we get any sense here of the actual outdoors. Every mood is a basement mood. Every nature quote is a quote not from the field or the forest, but from the jar filled with formaldehyde. 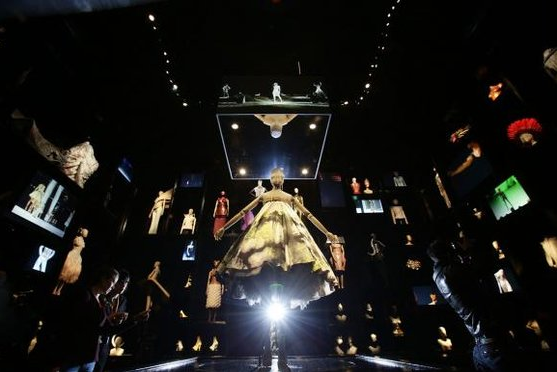 McQueen, who was born in Lewisham but had Scottish ancestry, came out of school, aged 16, with an O-level in art. Managing somehow to talk his way into a job on Savile Row, he seems quickly to have become a wizard tailor, whose clients, I read, included Prince Charles and Mikhail Gorbachev. These tailoring skills are what we keep being told lie at the centre of his talent. By the end of the show, however, they have all but disappeared behind outrageous encrustations of exotic materials and extravagant theatrical effects.

At one point, a hologram of swirling clouds solidifies magically into Kate Moss in a white dress. Wow. Great melodrama. But where’s the tailoring?

Back at the start, where everything is plainer, McQueen’s cutting skills are easier to identify. Notably in a room filled with reshaped tuxedos and angular military jackets that require the wearer to have little obvious shape of their own, because the gear does so much of the shaping for you. Ever wished you were an inverted triangle? Get a McQueen frock coat circa 1996.

We begin with a section called London, devoted to his earliest collections as a student at Saint Martins. The idea is obviously to uproot him from Vegas in the Noughties and replant him in Charing Cross Road in the 1990s. And there is indeed a pleasing scruffiness to these first outfits, with bits of punkish tartan set against much-ripped diaphanous hippie wear. Only when you read that the much-ripped hippie frock comes from a collection called Highland Rape does the black stuff start whispering again.

Another of the early collections, The Birds, from 1995, embodied here by a crimson jacket covered in black swallows, is not, after all, about birds that go tweet and signal the spring. It’s about the birds you see in Hitchcock films. The ones that peck your eyes out.

These gothic moods are exaggerated by a tremulous and lavish installation that looks like something from a Tim Burton movie. A remake of Poe’s The Masque of the Red Death, perhaps, where the blighted guests wander through a suite of doomed rooms, each one a different colour. In Poe’s tale, there are seven such rooms. Here there are 10, loosely chronological in sequence, all focusing on a signature look.

The room with the tall haunted-house mirrors is devoted to Romantic Gothic, where McQueen’s fascination with 19th-century mystery and masochism gets its most melodramatic outing. The bulk of his reinventions of tartan are gathered in an austere approximation of a wood-panelled gallery in a Scottish castle. Romantic Primitivism, meanwhile, where his fascination with dried bits of animal body is mixed with oddments of traditional African costume, is set, somewhat distastefully, in a cave lined with the bones of dead monks.

At the centre of all this occasionally ludicrous mise en scène-ing is a huge gallery devoted to that old design chestnut, the cabinet of curiosities. Packed with all manner of McQueen wear — shoes, headdresses, skirts, pants, masks and videos — all displayed in towers of black boxes, it’s perhaps the place in the show where McQueen’s huge debt to the contemporary art of his times is most fully evident. 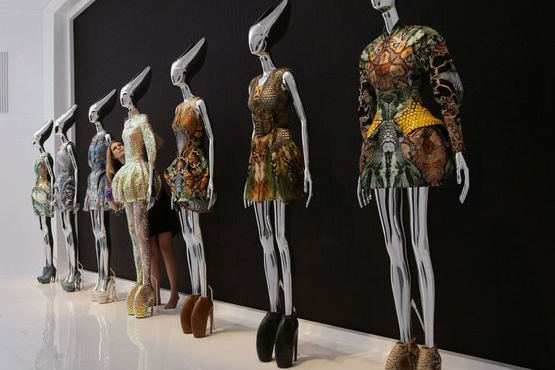 In the years when all this was happening, from the mid-1990s to the mid-2010s, you could hardly move in contemporary art without tripping over yet another artist whose work was derived from cabinets of curiosity. Most notably, of course, there was Damien Hirst, shark-stuffer extraordinaire, whose seminal impact on McQueen is felt here in every box and mannequin. The butterflies scattering from Philip Treacy hats. The alligator heads acting as epaulettes on romantic-primitive dresses. The vitrine in which a naked model reclines in the 2001 collection known as Voss. The colourful kaleidoscopes of animal patterns in the celebrated Manta dresses of his final show. The ubiquitous skulls. If I were Damien, I think I’d be insisting on a cut. His influence is everywhere.

Except, that is, in the shapes themselves, which, in McQueen’s best work, manage to maintain an air of precise clarity. It’s here, in the occasional triumph of tailoring over chaos, that he succeeds in bringing a sense of outline to all the frantic flocks of influences that wriggle, screech and howl through the show.

Back in the Africa room, among the creepy carcasses and trite displays of touristic tribalism, there’s a sudden moment of intense beauty, with a gorgeous dress of yellow glass beads set over a skirt of the blackest horsehair. Over in the Scottish section, where McQueen’s desperate search for identity leads him clunkily from tartan to tartan, the clunkiness is abruptly elbowed out by the heightened loveliness of a red ballgown made of closely layered feathers.

Savage Beauty actually began life in 2011 as a hugely popular exhibition in New York, at the Metropolitan Museum of Art, no less. This is not the place to question the presence of fashion shows in museums of art, but the recent battering that Björk’s exhibition at MoMA has had in some sectors of the American art press does make you wonder if we are not in need now of some clearer separations between pop, fashion and art. It’s not an issue here, because the V&A is a design museum with a long tradition of fashion exploration, but even within McQueen’s own output, there is such a greedy confusion to be witnessed between art, theatre, dance, music, stage design and costume drama.

For a video tour of the exhibition with curator Sonnet Stanfill follow this link: https://youtu.be/Xm_7-ybM_EI