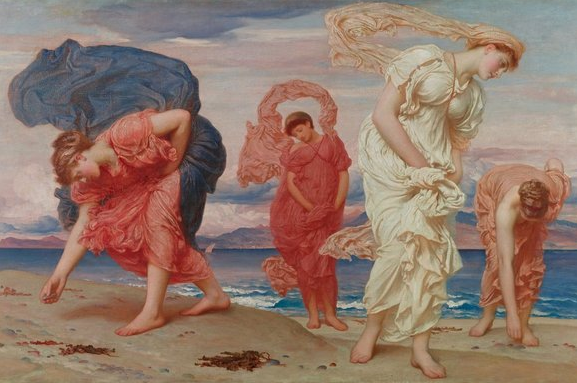 A good place to go if you need to be reminded of the fickleness of fame is Leighton House in Holland Park. More clearly than just about anywhere I have ever visited, it makes obvious to the entrant how dramatically values can change. How fame changes. Taste changes. Art changes. Religions change. Beauty changes. The role of women in society changes. Everything changes. As I said, if you need reminding of life’s essential fickleness, go to Leighton House.

Frederic Leighton, “the cock of the whole painting school, the favourite of all”, was born in 1830, in Scarborough. His father was a doctor, so there was money in the family. Little Freddy was sent off to Europe to study painting under a German, Eduard von Steinle, of whom I have not previously heard. Steinle must have taught him well, though, because when Freddy returned to England in 1860, he was quickly popular. By 1878, he was president of the Royal Academy. That same year, he was knighted. In 1886, they made him a baronet. And in 1896, he was raised to the peerage as Baron Leighton, the only artist ever entitled to sit in the House of Lords. It lasted a day. The next afternoon, he was dead. A decade later, his reputation began to plummet.

During his youthful travels, Leighton had developed a passion for Islamic art, and the gorgeous house he created for himself during the 30 years he spent as Britain’s most famous and valued artist is basically a sumptuous Islamic palace from Istanbul, re-created in Holland Park. Tiles, fountains, wooden screens — it’s all there. Leighton’s rise and rise was backed by the class that used to be known as the nouveau riche: people who made their money in soap or cod-liver oil or railway construction. I remember them here because I see their descendants are at it again, spending ridiculous amounts of money on contemporary art whose price is guaranteed to drop like a stone in the next value cycle. If I were a nouveau riche Russian with a Kensington house full of stuff bought at Frieze, I would instruct my chauffeur to take me immediately to Christie’s, where I would start selling as if there were no tomorrow. 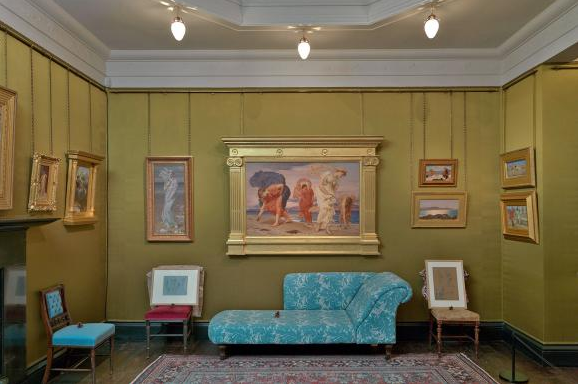 These dark thoughts have been prompted by the arrival at Leighton House of a selection of Victorian paintings from the collection of Juan Antonio Perez Simon. The show, called A Victorian Obsession, contains several works by Leighton himself, returned to the place of their painting for the first time, accompanied by a parade of beauties created by the like-minded names of the period, from Rossetti to Burne-Jones, from Millais to Alma-Tadema.

Perez Simon is apparently one of the richest men in Mexico. He made his money in telecommunications and retail. All the Victorian art on show here — 52 pictures, the largest collection of its kind outside Britain — has been acquired in the past 20 years. Mexico’s richest lover of droopy damsels in distress and muscular Greek nymphettes playing ball games on the beach has certainly been busy.

Perez Simon’s pictures have been scattered about Leighton House, among the peacock blue tiles and the Iznik pottery, and hung unlabelled, so they fit in perfectly. The focus of most of them is the Victorian femme fatale. Indeed, according to my back-of-the-envelope calculation, this display could well be setting a new world record for cramming the greatest number of sultry and unsmiling Victorian temptresses into a limited space. What Perez Simon enjoys about the art of Leighton and co is impossible to miss.

Dante Gabriel Rossetti gives us a bulky blonde nude holding an arrow and an apple as she stares wistfully into space. She’s meant to be Venus, but her colours and shapes are from Staffordshire, or maybe Derbyshire. Next to her, a woman with a key, painted by Burne-Jones, stares out at us nervously as she prepares to open a door. She’s Fatima, the unfortunate wife of Bluebeard, who is about to find out what her husband keeps in his forbidden chamber: the corpses of his previous wives. In the legends, Fatima is a Turkish girl. In Burne-Jones’s painting, she’s his wife, Georgiana, who was from Birmingham.

There are, of course, people who take all this nonsense seriously. I am not one of them. To put this demented escapism into perspective, it is worth remembering that Leighton himself was just a year older than Manet. But while Manet was ushering in the impressionist revolution, in 1871, Leighton was imagining four Greek nymphs on a beach gathering pebbles in their floatiest robes.

This is art divorced so dramatically from the reality of its times that it belongs in a parallel universe. Perez Simon made his money with the new, but it is antiquity that presses his ringtone. The pretend Greek and Roman babes who appeal so mightily to him are the inhabitants of a world without a context. 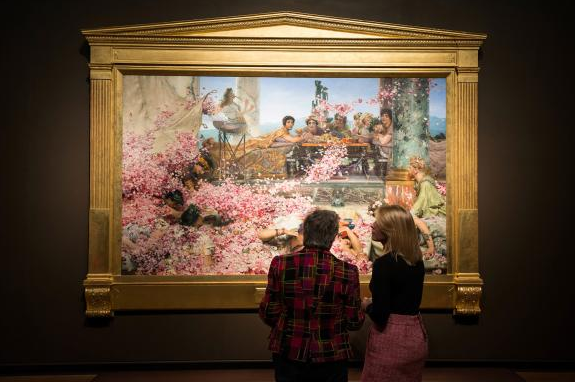 Also lent to the show, by the V&A, is a pseudo-Roman couch commissioned by Lawrence Alma-Tadema in about 1890,  as a studio prop. Alma-Tadema, a particular favourite of this display, was actually Dutch. He was born Lawrence Tadema, but added the Alma, his godfather’s name, so he would appear higher up in artists’ catalogues. It still works. He’s the first name in the catalogue here.

This, then, was an artist who knew how to manipulate. In this show, he does it repeatedly by painting beautiful young girls sitting on benches by the sea, thinking. The painting entitled Her Eyes Are with Her Thoughts and They Are Far Away is a classic example. The droopy redhead, more Shropshire than Naples to my eyes, is sitting on the V&A’s bench, looking out at the Tyrrhenian Sea above Sorrento.

What is impressive here, and almost always in Alma-Tadema, is the painting of the white marble that surrounds her. He gets it perfectly, right down to the rusty bits. What he gets wrong is the reality of women. Here and throughout the show, they are cast as a hapless victim class, sobbily awaiting their rescue by the heroes outside the frame — the painters who imagined the pictures: a bunch of middle-aged men with beards. Come on, it’s ludicrous.

The biggest Alma-Tadema, the climax of the show, is a post-pre-Raphaelite whopper called The Roses of Heliogabalus. Heliogabalus was a particularly decadent Roman emperor who, according to contemporary legends, would shower his followers so abundantly with flowers that he suffocated them. In the original stories, the fatal flowers were violets. Here, Alma-Tadema turns them into roses, thousands of them, cascading down onto the beautiful Roman girls below and murdering them, while the evil Heliogabalus looks on.

It’s a grotesque painting. And to make everything worse, the room in which it hangs has been filled with a special scent created from “seven of the world’s most exquisite roses” by Jo Malone of London. Thus the aesthetics of the perfume counter at Selfridges have been visited upon a macabre scene of floral genocide.

As I said, if you need to be reminded of the fickleness of taste in art, of the changing role of women in society, of the elastic nature of the concept we think of as reality, Leighton House in Holland Park is the place to go.