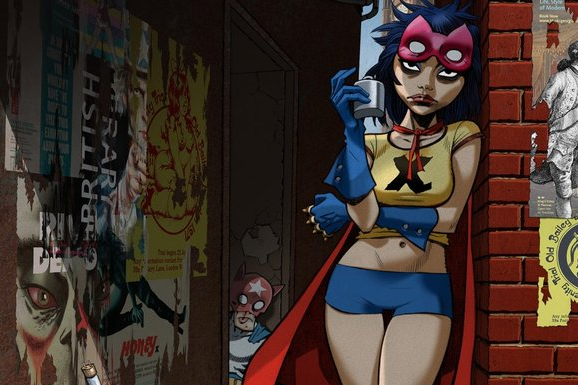 I went into Comics Unmasked with an open mind, perfectly prepared to accept that comics are worthy of serious museum investigation. If the British Library, of all institutions, was championing the cultural import of comics, I expected them to be worthy of championing. That’s how I went in.

I came out hating the damn things. Or, rather, hating the examples selected here, in a display that is overly fond of the creepy, the gory, the deluded and the ignorant. People who walk into schools and shoot their teachers have atmospheres like these. Just about the only good thing the show does is commence with a quote from Julie Burchill, painted onto the wall: “Comic books for adults is a complete contradiction in terms, as anyone who reads comics is not an adult and should have their voting rights removed ASAP.” On this evidence, she’s right.

The exhibition sets out its stall in the foyer of the library, where a huge poster of a sexy superheroine in hot pants, who looks like X-Girl, is taking a slug of whisky in a dark alley. It compares itself with the famous tapestry on the opposite wall, in which Ron Kitaj reimagines Eliot’s The Waste Land as a dystopian nightmare set in the shadow of Auschwitz. In their size and colour, the two images are comparable. Where they differ is in the fact that one is the creation of an intelligent adult who’s read some books, while the other is teenage drivel that has poured out of a mind untouched by historical reality.

At the feet of the superheroine (created by Jamie Hewlett, of Gorillaz and Tank Girl fame) there’s a heap of drug paraphernalia: some broken cigarettes used to make a joint; a few empty wraps. And at the back of the alley is her superhero boyfriend, zonked out in a junkie coma. The sight of the British Library seeking to get down with the kids as crudely as this is depressing.

The show ahead turns out not to be a legible history of comics in Britain, which might have been useful. Instead it’s an outpouring of darkness, gore, sexist nastiness and occult nonsense, by a pair of curators who think and write like impressionable fifth-formers with a taste for heavy metal. How Paul Gravett and John Harris Dunning managed to smuggle their brainless blackness into the exhibition rooms of the British Library is a mystery not even X-Girl could solve.

We commence with Mr Punch, the “radical scourge of all authority”, whose cartoon antics were intended to annoy the Victorian middle classes. A statue of Mr Punch, which stood in the lobby of the Punch offices, is followed by a painting by Leonard Raven-Hill of Punch in a smoking jacket, smirking impishly. These Mr Punch portraits are accompanied by examples of subsequent cartoon characters who, like Punch, were notorious for causing mischief: Beryl the Peril, Dennis the Menace, Jonah, “the hapless, buck-toothed jinx from The Beano”.

The driving idea here is that comics have always been a back door through which naughtiness and rebellion have entered our culture. To back it up, the organisers have filled their display with scores of life-sized mannequins wearing Guy Fawkes masks, of the kind worn in Alan Moore’s V for Vendetta and adopted by the Occupy movement. It’s like a Chapman brothers installation: you keep coming round the corner, and there are these horrible stalkers in masks waiting in the twilight.

The problem with all this is that it reflects the curators’ personal agenda, but not what actually happened. Mr Punch was indeed a notable comic character, but his origins lie in Italian theatre, in the commedia dell’arte and the notorious Neapolitan scoundrel Pulchinella. In Britain, he belongs more actively to the history of the seaside puppet than the history of the comic book. Even in Punch magazine itself, he appeared most often in single cartoons. The defining comic-book idea, of a story told simultaneously with pictures and words, barely applies to him.

If shoddy scholarship is one of the problems with this display — the catalogue describes Sergeant (sic) Pepper’s Lonely Hearts Club Band as “the album that kicked off the ‘Swinging ’60s’”, even though it came out in 1967 — an even worse issue is its hagiographic relationship to the output of Alan Moore and the other gothic comic-makers of the so-called “British invasion”, who rose to prominence in the 1980s while working on American comic books.

Moore, who gets more namechecks here than Popeye had cans of spinach, sets the tone for a show fixated with the Mr Hyde side of comic art: lots of mutilation, lots of violence, lots of horror and a horrible “sex” section featuring grim sadomasochism and tied-up girls.

Though the scary stalkers in masks have had lots of thought put into their positioning, the comics are difficult to read. Stuck far away in the twilight, at the bottoms of glass cabinets, they may well be attempting a more nuanced storyline than I am repeating here, but I couldn’t get close enough to tell. Fewer dummies and a few more magnifying glasses would have been a better distribution of resources.

In a truly ridiculous climax, the final room is devoted to Aleister Crowley, the “Great Beast”, and his passion for drugs. Apparently, Crowley’s influence on the history of modern comics has been immense. Moore, who describes himself as a magician first and a comic-book writer second, is a follower of “the Magus” and shares his appetite for magic mushrooms and occult realities. Quite how the British Library, the fount of so much reason, ended up devoting this much space to this much unreason is beyond me. 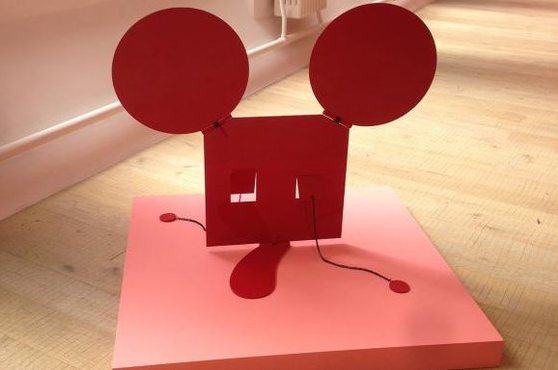 Where Comics Unmasked groans with darkness as it seeks, and fails, to be taken seriously, Everything Falls Faster Than an Anvil, a selection of artworks inspired by comics at the Pace Gallery, glows with bright cartoon sunshine. It’s by far the better show.

Taking its title from one of the guiding rules of cartoon action — that Bugs Bunny will always reach the ground before the anvil — the exhibition celebrates comics as a positive and witty influence on art. Installed beautifully in a set of galleries painted two-tone pink by Carl Ostendarp, the show mixes old with new.

Two atmospheric Claes Oldenburgs, a giant cigarette butt and a fabulous head of Mickey as a red doll’s house, take us back to the pioneering days of pop. More recently, a hilarious sculpture by Peter Wächtler from 2013, influenced by those singing instruments you see in early Disney films, has a set of large organ pipes wonkily wailing Simon and Garfunkel’s version of El Condor Pasa: “I’d rather be a hammer than a naiill…” What relief. Comic art you can smile at.