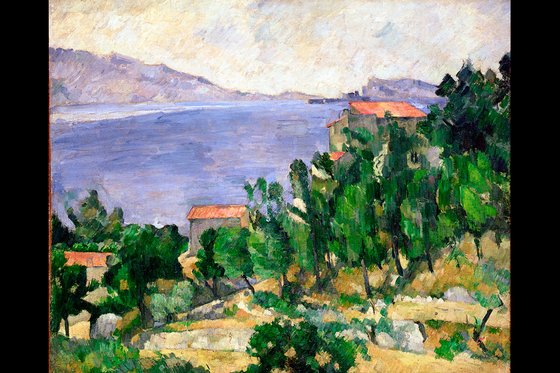 Writing about Cézanne is difficult. And it is difficult from all angles. If you focus on the art itself, you face a momentously elusive body of work which twists your understanding this way and that, and defies straight­forward description. His oeuvre is a mountain that has never found a Hillary. If, however, you take the biographical route, and focus on his life, you face another set of obstacles.

Basically, nothing much happened to him. At least not in conventional biographical terms. He was born in Aix in 1839, tried and failed to make it in Paris, and returned to Provence for the second half of his life to paint revolutionary art in grumpy isolation. One wife. One son. A rich father who wanted him to be a lawyer. The bullet points of Cézanne’s life would leave lots of white on the back of a postcard.

There is the additional problem of his personality. Which was, or seems to have been, deeply unattractive. In eyewitness accounts, he invariably comes across as weird and awkward. I list these difficulties to make clearer what Alex Danchev has taken on in his brave new life of Cézanne. Danchev is not your usual artistic ­biographer. Currently the professor of international relations at Nottingham ­University, he has previously written about the Falklands war, about Britain’s special relationship with America, and about international perspectives on the Gulf conflict. All of which is excellent preparation for a life of Cézanne. Only someone as new to Cézanne’s art-­historical presence as Danchev would have dared take on the task.

Not that this is a conventional biography. Broadly chronological, but also enthusiastically thematic, this is a life that jumps happily backwards and forwards to gather its points. One of the reasons the Cézanne pictured here feels so unfamiliar is because the author has been so creative in his timelines. But Danchev’s masterstroke is to use literature rather than art as his point of entry.

We have always known that Cézanne’s best friend at school was Emile Zola, and that the two of them formed an intimate creative coupling. Zola’s memories have supplied earlier writers with much of their best infor­mation about the young Cézanne. What nobody has previously thought to do — or perhaps they simply didn’t have the patience for the task — was to mount a fingertip search through Zola’s huge fictional oeuvre as well, ­looking for all and any signs of his best friend’s presence.

As an instinctive realist, Zola put Cézanne into his work more often than any of us have previously realised. By examining these many Cézanne-ish appearances, in their many fictional guises, Danchev adds an important tranche of new material to the Cézanne biography. And because literature is always a whisper from within, much of this new material successfully illuminates that most shadowy of territories: Cézanne’s inner life.

It turns out that the painter, his family, his background, his words and his ideas, have all been misrepresented. Even his appearance has been wrongly imagined. Like everyone else, I have always thought that Cézanne was a ­shuffler: short, bulky, sulky, and wrapped up. But Danchev’s forensic trawl through the surrounding literature has come up with a description of “a big, solid youth, long-legged and lanky”. This tall and lanky Cézanne walked with his head held high, “as if looking at the horizon”. His nose was delicate. His eyes sparkled.

Cézanne’s friendship with Zola was also tangibly physical. The descriptions of them bathing naked in the local river, the hours spent reading cheesy poetry to each other, wandering arm in arm through the Provençal countryside, are warm and surprising. A more sensational biographer would surely have got interested in the homoerotic implications of their relationship, but Danchev, to his credit, leaves such suspicions unexplored. Instead, the shared watery wanderings prompt a sensuous new understanding of Cézanne’s famous Bathers, of his relationship to trees, to clearings, to mountains. Determination is outed as nostalgia. Rigour is replaced by pleasure.

Who the hell is this tall, lanky sen­sualist skinny-dipping through these early pages? Surely that is not Cézanne? Almost every given about the painter is challenged. The revisionism ex­­tends to his family, too. Cézanne senior, who is always caricatured as a thick Provençal banker, is glimpsed in various snatches of Zola’s fiction as a ­boisterous and nuanced figure. “Moi, Cézanne, I couldn’t have made a cretin,” is one of his finer real-life outbursts.

But it is Cézanne himself who changes most meaningfully. He wasn’t as weird as we assumed, or as misogynistic, or as unhappy, or as awkward. Having understood his sensuality better, Danchev makes it easier to understand the confusing transition that takes place in Cézanne’s art from the dark, strange, palette-knife paintings with which he started out, to the light-filled, peace-filled, solemn vision of nature with which he ended up. Sensuality is a tone, not a style.

Events, too, are understood differently. Cézanne’s regular rejection by the Paris salon was actually the hoped-for ­consequence of a clever campaign of self-presentation: an attack by Cézanne on the salon, not an attack by the salon on Cézanne. He was the rejector, not the rejected. It’s all there in the small print of the times if you search thoroughly enough.

However, an experienced reader is not the same thing as an experienced looker. When it comes to dealing with paintings, rather than people, or events, Danchev is less convincing. The examinations of specific pictures scattered through the book are generally uninsightful. Indeed, the entire arc of Cézanne’s career as a painter is too thick on the people side, and too thin on the side of the great still lifes and the famous campaigns in the landscape. Occasionally, Danchev is overly fond of his own literary voice, too, and a long concluding chapter in which every paragraph begins with the words “According to” is an act of postmodern desperation. But these are minor shortcomings in an important book.

Cézanne painted some 26 self-portraits between the 1860s and his death in 1906. Of an early one, owned by Zola, that was put up for sale in 1903, a commentator said: ‘The crowd was particularly amused by the head of a man, dark and bearded, whose cheeks were sculpted with a trowel and who seemed to be the victim of eczema.’ Even devotees such as DH Lawrence demurred: ‘Poor Cézanne, there he is in his self-portraits…peeping out like a like a mouse and saying: I am a man of flesh, am I not?’