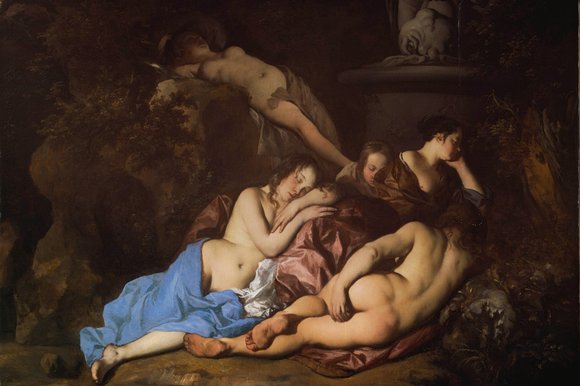 Loss is the theme that unites two enjoyable shows, both of which are set in stormy stretches of Britain’s past. Peter Lely: A Lyrical Vision, at the Courtauld Gallery, is about the loss of an entire artistic career, and of a particularly sexy subsection within that career; The Lost Prince, at the National Portrait Gallery, does what it says on the tin, remembering the butterfly life of a marvellous prince who fluttered briefly before the fates ­mislaid him. Henry, Prince of Wales (1594-1612), was, if you will allow me a ridiculous switch in sexes, the Princess Diana of his time. Adored by the people, celebrated for his modernity, handsome, dashing, he died with shocking suddenness at the age of 18, leaving a looming vacuum where once there was hope. I’ll come to Henry later, because he loved art, which is a rare quality in British ­royals. But first we need to travel deeper into the 17th century, to the final moments of the reign of Charles I, ­Henry’s tragic brother, who also loved art, where we eventually encounter the problematic career of Peter Lely.

I write “eventually” because Lely arrived in Britain from Holland in about 1643 — just in time to witness Charles’s defeat and beheading. What a welcome. The Courtauld claims he became the leading artist in Britain after Van Dyck, but regular readers of this column will know this to be untrue. It was the overlooked English artist William Dobson who took over as the King’s painter after Van Dyck’s death in 1641, and who went on to record, brilliantly, the faces and atmospheres of the Civil War. The Courtauld gets that wrong. Everything else in its Lely show is revelatory.

Born Pieter van der Faes, Lely studied in Haarlem. Legend has it that he took his new name from the decorative lilies carved into the gables of his family home. It certainly suited him. Quick-fingered, elegant, superbly trained, he showed up all the local painters, bar Dobson, as soon as he arrived in London, and quickly established himself in Covent Garden as the go-to portraitist of his times. Although the politics of his era were scary, Lely seems barely to have noticed them, skipping happily from royalist to Roundhead in his commissions. What a smoothie he was. After the Restoration, he became Charles II’s court painter. Before the Restoration, he painted the most sympathetic of all portraits of Cromwell. He worked quickly, employed scores of assistants and put his name to a notoriously uneven oeuvre.

Until this show, his finest accomplishment was held to be the delightful sequence of portraits he painted of the female beauties of Charles II’s court, of whom there seemed to be an infinite number. Lely’s Restoration beauties are slick, flirty and easy to accuse of shallowness. It’s always been known he could paint well when he tried. It’s been just as well known that he didn’t try very often. The Courtauld’s show does more than challenge this impression: it actually stops it in its tracks. By focusing not on Lely’s wristy portraiture, but on his risqué mythological scenes and few religious pictures, this surprising display feels as if it has discovered a whole new artist.

A couple of the paintings are familiar. Most are not. Scattered here and there among our museums, dotted about in private collections, they have never previously been allowed to form a coherent whole. Now they do. And they prove, conclusively, that Lely’s sexy mythologies form a definitive part of his output.

The Courtauld’s own picture, The Concert, from about 1650, shows the painter himself playing the bass viol in an enchanting outdoor concert for which the most beautiful women in the ­audience have turned up topless. Sex, music, mystery, a beautiful landscape, a dreamy mood — surely some sort of British record is being broken here for slipping the most enticements into a single image? From Dulwich Picture Gallery comes the outrageous Nymphs by a Fountain (c1654), in which gorgeous woodland nymphs have fallen asleep in a clearing, in such a fortuitous arrangement that they appear to display all the best angles of the female nude at once. How deeply they sleep. How firmly they yank at your desires. What naughty art this is.

The show includes half a dozen of these surprising nymph clusters, a set of half-length portrayals of musicians and, in its finest moment, a golden-haired shepherd boy who lifts a recorder to his lips and prepares to enchant us with his music. Ha! A spectacularly sensual 17th-century sensibility has somehow been smuggled into ­Britain under the noses of the ruling puritans. Lely has never been lost in the sense that we did not know he was there, but he has certainly been lost as the contributor of these dangerously Venetian textures to British art.

If Henry Stuart, the Lost Prince, had not died of typhoid fever in 1612, if the sense of dashed hopes that filled the nation as a result of his passing had not been so palpable, if Charles I had not succeeded to the throne instead, then both British history and British sensuality would have taken a different path. That is the message of the National Portrait ­Gallery’s perfect little Henry show.

The eldest son of James I, he seems to have pressed everybody’s positivity button. Where his father was ugly and deformed, Henry was lithe and handsome; where James was dour and Scottish, Henry was adventurous and of an international cast. Impressively educated, a fierce lover of the arts, he was every inch the brilliant monarch in ­waiting. Until typhoid fever called out his number. His physicians placed dead pigeons on his head and split a cockerel at his feet, but still could not save him.

All this the NPG recalls for us in an engrossing display of paintings, books, letters, mementos and maps, the highlight of which is a trio of large paintings of the prince in action — hunting, riding, unsheathing his sword — by ­Robert Peake, the king’s painter at the time. This is surely the debut of movement in British portraiture. It’s exciting, and one more thing that was lost.