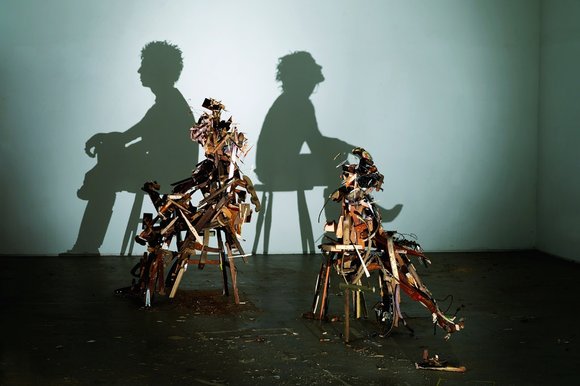 Comparing art with magic is not a fashionable thing to do. In some curatorial circles today, it would be laughed at. The other day, I went to see the dire MA show at ­Chelsea College of Art and ­Des­ign, and found myself wandering through an entire department devoted to theory in art. What a nightmare. This is where people are taught to write sentences such as the one in the press release for Tim Noble & Sue Webster’s show at Blain/Southern that tells us: “The relationship between materiality and form, which has been intrinsic to their practice, is deconstructed in their new sculptures.”

The particular irony here is that Noble & Webster are clearly not “materiality” and “practice” kinds of guys. In the catalogue for this dramatic and, yes, magical display — their first London solo show since 2006 — they are interviewed by the veteran music writer Jon Savage, who has written brilliantly in the past about punk rock. Savage notes that they look like a pair of posing lead singers and confirms how much their attitude owes to punk. They like to shock. They deliberately use naughty words and naughty images. He doesn’t mention the relationship between materiality and form that is intrinsic to their practice. Noble & Webster don’t bring it up, either.

Blain/Southern is owned by the people who used to own Haunch of Venison. In 2007, they sold that honeypot to Christie’s and opened another gallery. It has obviously done well, because this new space is gigantic. From the outside, you see nothing. Like bookies and sex shops, ­contemporary art galleries prefer to present a blank face to the world. Inside, a huge white ­double cube has been animated and haunted by six new Noble & Webster shadow sculptures.

What they do is assemble heaps of junk so precisely and inventively that, when a powerful light is shone onto them, a miraculous shadow is cast on the wall behind. The shadows are invariably striking likenesses of the artists themselves: posing like rock stars, like Egyptians.

In the past, the heaps of junk were created from creepy mounds of taxidermy featuring rats and crows. The moods were relentlessly Hitchcockian and a dark psychology pervaded the work. In this new suite of self-portraits, the taxidermied rats have been replaced by assortments of wooden scraps, of the kind you might find in a car­penter’s workshop. Shavings. Planings. Old tools. Ladders. Broken struts. It’s still junk, but it has lost its sinister note and acquired a constructivist air.

This “hey presto” tone that Noble & Webster exploit — here’s a bicycle seat, here’s some handlebars and, hey presto, there’s a bull’s head — is one of the oldest tones in art. The artist as transformer or alchemist has a history that goes back, through the Midas myths, to the very beginning. In the first caves to which artists would voyage with their flickering torches and their dread of the unknown, art’s task was to cause important magic to happen. You don’t travel miles underground to draw animals on the walls of a dripping cave for fun, or because you hope to have a hit at the Frieze art fair. These were life-and-death reasons: an effort to influence the future; a stab at communicating with the gods.

Am I saying that Noble & Webster, with their shifting shadows and magical transformations, are consciously evoking their ancestry in the caves? Of course not. I may be hopeful, but I’m not a berk. The shadows, the sense of transformation, the magical note struck by these effects, are modern coincidences. My point is that something survives of those artistic origins. And I love it.

The most ambitious work in the show is a double self-portrait called Wild Mood Swings, in which the shadows formed by two piles of junk create silhouettes of the two artists perched on stools, with their backs turned to each other. In real life, they’re a couple, so perhaps some relational spat is being memorialised. The pleasure here comes from comparing the chaos of the piles of junk at the front with the clarity of the silhouettes at the back. The junk seems to be exploding and losing coherence. The shadows are miraculously precise and accurate. You can see the straps on her boots, the outline of his rings. How can such precise self-portraiture have been achieved with so much inchoate junk? It’s magic.

At the National Gallery, ­Richard Hamilton: The Late Works is a thunderous surprise and a fabulous event. Hamilton, who died last year aged 89, just as this display was being finalised, was probably the most important British artist of the 20th century. Yes, he lacked the bombast of Bacon or the ­ubiquity of Henry Moore. But what he had a feel for — and the others did not — was the changing dynamics of the modern world. He was our Warhol. Except much more subtle. And, of course, he came first.

This marvellous show features various responses from various years to various issues raised by various works in the gallery. Most of which contain the nude. Heavens, but he was busy at the end. The first reason this show is surprising is because it has so many things in it: 19 sizeable paintings, no less. The glaring, unshakable presence of the nude is also a turn-up. ­Hamilton has tackled desire before. Often. As the inventor of pop art, way back in the early 1950s, he could hardly have avoided it. But he has surely never tackled it as ­brazenly as here.

In one painting — a modern Annunciation — the beautiful nude sits in a hallway and speaks to the angel Gabriel on the telephone. Elsewhere, she blurs down some stairs in several outlines, in Hamilton’s version of Duchamp’s Nude Descending a Staircase. And in the show’s climactic work, she lies on a bed in the sensuous reclining pose favoured by all the Venuses and Olympias of art. Standing by her bedside are Poussin, Courbet, Titian. And, unseen but surely present, Hamilton himself.

This is a typically puzzling collection of images. As always in a Hamilton show, you feel you might need a pocket calculator to work out all the angles. He has always been an artist who paints with his brain. The general impression is of the world of the old masters being infiltrated and spied on by image forces from our own times. Kate Moss has sent a hit squad into Fra Angelico’s monastery.

After a while, though, as you flick from nude to nude, an elder among the Susannas, you begin to suspect that desire may not be the chief subject here. What begins to count, what you begin to weigh up, is how comprehensively the dividing lines between art and life have been paintboxed over. Some of the oil paintings really are oil paintings. Others have been digitally remastered to look that way. The nudes pose like painted Venuses, but the cellulite on their bottoms comes from our world. Perhaps the main subject here is that magnificent final subject: truth.