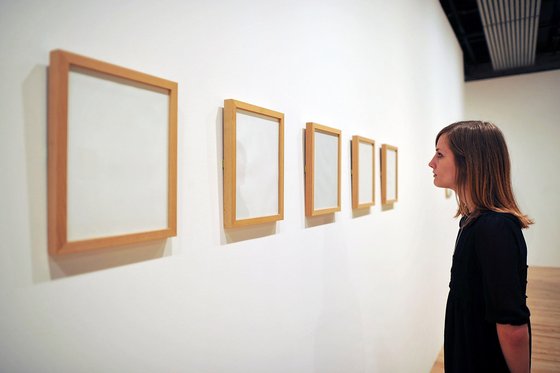 There are two good things about the Hayward Gallery’s celebration of invisible art, and one bad thing. Since the positives outnumber the negatives, it is right to start with them. I’ll get to the problems later.

Good thing number one is that the subject is being tackled at all. Plenty of observers will dismiss the whole idea as a gimmick. The Hayward, alas, has lots of previous when it comes to artistic nonsensicality, and the current director, Ralph Rugoff, is renowned for the high scores he regularly achieves on the bullshit meter. But the fact is that many artists, across many artistic generations, have used nothingness in various ways to say various things. Ever since 1918, when the great Russian suprematist Kazimir Malevich painted his pioneering White on White — in which a white square was set against a white background — nothingness has been regularly reinvented.

One of the reasons I stopped attending student shows at Goldsmiths College is that I could not face seeing another blank wall presented as a radical exhibit by yet another copycat conceptualist. The worst winner of all time of the Turner prize was the tedious Martin Creed, in 2001, who showed us an empty room in which a light bulb went on and off, and that was all. It wasn’t just the non-spectacle that was so irritating. Just as annoying was the thought that Creed had so many predecessors.

So invisible art has a busy history. And, had it been an easier subject to explore in an exhibition, it would have been explored before now. The difficulties involved in arranging a display of nothingness are obvious. The Hayward, in a very Rugoff gesture, has actually upped the ante by making the captions all but invisible, and by really going to town on the empty gallery look. The show only makes any sense if you look carefully, read carefully and think carefully as you stroll through the snowdrift.

Thus, Jeppe Hein’s Invisible Labyrinth, from 2005, looks initially like a big empty room. Only when you read the instructions on the wall do you realise that the point here is to put one of the contraptions available at the back of the gallery on your head and wander out into the emptiness, with your headphones buzzing every time you choose the wrong path through an unseen maze. Sure to be an audience favourite, Invisible Labyrinth offers clear proof that authentic creatives will always find a new use for the empty room. It also illustrates how rapidly the divide is shrinking these days between the modern artwork and the funfair ride. (This is no place to expand on the need to entertain at any costs that is afflicting our cultural institutions, from Tate Modern to the BBC, but since that tendency is the direct result of putting audience numbers before principles, we should at least acknowledge that the Hayward has found an inventive way to dumb us down.)

If the first reason to admire the show is that it tackles a genuinely pertinent subject, the second is that it tackles that subject well, with verve and variety. Anyone who imagines that there is only one kind of white, or who expects all empty rooms to have the same effect, will have those views challenged by a display that leaps nimbly from blank to blank. Nothingness turns out to be a quality with many faces.

Yves Klein, who began exhibiting empty rooms in 1957, and who is the earliest creative nihilist examined here, appears to have had wacky religious reasons for his obsession with “the void”. Even from the tiny fragments of archival evidence presented to us here, it is clear nothingness had a profound and cosmic presence for Klein. His empty rooms set out to confront, rather than avoid. The visitor to one of his “architecture of air” displays was plonked in an expanse of Buddhistic whiteness that appeared to nurse ambitions to say it all.

That is a very different effect from the cheeky consumer blankness created by Andy Warhol when he exhibited his Invisible Sculpture in 1985. By showing an empty plinth onto which he had once stepped, Warhol seemed to be celebrating his own vacant celebrity. We now know that the devious so-and-so was actually questioning the final value of celebrity per se: a work that appeared to be about him was actually about us.

Another form of absence explored by this surprisingly fertile event is what we might call memorial absence. It begins with Claes Oldenburg’s proposal for a monument to John F Kennedy, consisting of a huge statue buried underground, so you cannot see it: a disappeared president is being commemorated by a disappeared artwork.

In the same spirit, the Mexican artist Teresa Margolles shows a white room into which two noisy air-conditioning units are pumping moist air. Only when you read the caption do you realise that the water cooling this air was originally used to wash the dead bodies of anonymous victims of Mexico’s drug wars.

Just as all the empty rooms in the show have a different kind of presence, so the actual whiteness arrived at by a wide range of strategies is also varied. Bruno Jakob, who has apparently spent 25 years devising different means of making invisible paintings, gives us a crumpled white in which he once wrapped some potatoes, a blank white across which a snail has wandered and a glowing white created by a horse pro­jecting its psychic energy onto the empty picture.

Under Rugoff, the Hayward has displayed a recurrent weakness for this kind of tricksy conceptual games-playing; and while the dreaded Martin Creed has been avoided, the show is not entirely devoid of silly ideas seeking to pass themselves off as deep ones. Jay Chung went as far as to shoot an entire movie with a full complement of crew and actors, but with no film in the camera. He has never told the cast or crew that their efforts were not recorded.

Most of this journey is set in the spectator’s imagination. A typical exhibit describes a situ­ation in a caption, then encourages you to think about it. As soon as you get it, off you go to the next puzzle. Thus, the problem with this event is, predictably, the shortage of interesting things here to look at. Rugoff has explained that the reason he wanted to do the show in the first place was that this is the summer of spectacles in Britain, and the situation appeared to him to cry out for a non-spectacle. Which he achieves too often.

Pasted on the wall outside the installation created by the art co-operative Art & Language is a long and complex description of their ambitions for the piece you are about to enter. When you walk into the room, however, you see immediately that it is empty. It only takes a moment for the point to be made. Five seconds of looking and you’re off.

There is simply not enough here to savour. Not enough to watch at length. Not enough that pleases the eye. In a show devoted to various kinds of invisible art, the only really crushing sense of nothingness is the feeling left behind by the bad conceptual art.