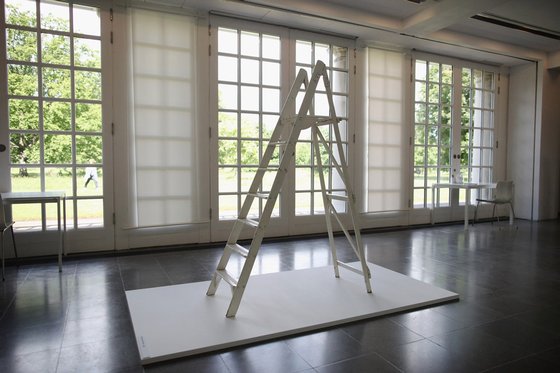 Those crazy so-and-sos, the gods of art, have been particularly crazy in their treatment of Yoko Ono. First, they allowed her to emerge as one of the most inventive artists of the 1960s. Then they got her to meet John Lennon, so her story would for ever become entangled with his. Then they pretty much ignored her for the middle decades of her career, while simultaneously blackening her reputation with all sorts of weird and possessive national stuff about breaking up the Beatles. Now, finally, with Ono in her seventies, they are building her up again, organising important international summations of her work and admitting that she has been a tremendous force in art all along. If anyone out there understands this trajectory, please do a very Yoko Ono thing and send me the diagram on a postcard. I would love to understand it too.

While the rest of the world has been recognising Ono’s sense-stirring contribution to the story of progressive art, one important artistic territory has been holding out. It is, of course, Britain, and, particularly, London. Unbelievably, the beautiful Yoko Ono exhibition that has now arrived at the ­Serpentine is the first solo show she has had at a public gallery in the capital. It is not a retrospective, but then neither is it a collection of new things. Instead, it’s a seamlessly fashioned hybrid of the two. Indeed, I don’t think I have ever seen a show in which the old and the new have appeared quite so interchangeable.

Ono has always been a ­master of two colours: black and white. Her art has always had the clarity and sparseness of a crisp piece of text. Outside, on the Serpentine’s lawn, the first work visitors will encounter is a giant chess set consisting only of the white pieces. The board, too, is white. Black is present only in its absence. So this is a game of chess with no way to victory, no winners or losers, no friction, no war. All Yoko is saying is, give peace a chance.

The show ahead is called To the Light, and the journey it traces also goes, in typical Yoko fashion, from down to up, from darkness to brightness, from war to peace, from what we are to what we could be. We begin with a gloomy room in which a set of battered second world war helmets suspended from the ceiling sway ominously in ­memory of their former wearers. Also in the room, three heaps of earth, coldly entitled Country A, Country B, Country C, say something dark and accusatory about modern warfare in her allusive and elusive style. She doesn’t mention mass graves, anonymous victims or war’s murderous secrets. It is your imagination that adds those.

To complete the impact of this poignant opening room, a poster from the John and Yoko days has been stuck to the wall. It’s torn and faded now, so you have to lean in close to read its message. It says “War Is Over! (If You Want It)”. Ono’s past is speaking to Ono’s present. The 1960s are speaking to the 2010s. Vietnam is speaking to Iraq and Afghanistan.

The rest of the show forms a sequence of pristine white environ­ments that could happily be advertising Persil. We begin with pieces evoking her Japanese past, notably Painting to Be Stepped On, originally made in 1961, which consists of a shabby patch of canvas across which you are instructed to walk. The piece was prompted by a terrible episode in Japan’s past when Japanese Christians were forced to step on images of Jesus and Mary. Only recently have the museums of Tokyo begun to exhibit the trampled plaques that survive from those dark days of national apostasy.

A tad more explanation in the caption would have helped with the understanding of Painting to Be Stepped On, but it is not Ono’s style to explain. She’s a thrower of pebbles into ponds, not a history lecturer. The centre of the show, its most exciting space, features a display of ­pioneering films, including ­Bottoms, made in 1967, in which she photographed 365 naked bums — a particularly quotidian count of what we represent as a species. I enjoyed Smile, too, from 1968, in which a charmingly young Lennon allows a slow smile to emerge on his face, then sticks out his tongue at us playfully.

In the same gallery, an installation called Amaze features a Perspex maze through which you are encouraged to wander while the light plays tricks with your boundaries. At the centre, if you make it, is a pool of black water in which is reflected the shimmering ceiling above you. It’s a pretty effect.

The catalogue tells us that when Amaze was first shown, in 1971, there was a flushing lavatory at the centre. I like the sound of that. Ono’s best work is surprisingly gritty. In Fly, a remarkable film from 1970, a fly is followed around a naked female body as it investigates the woman’s crotch and the long hairs ­protruding from her nipples. It’s a piece about decay, but also about feminine reality.

Always on the side of the woman in the sex wars, Ono is always on the side of hope in the war of human consciousness. She’s big on participation, and a lot of the art here has the air of a free gift about it. It gives you pleasure in the way that the goodies handed out at the Ideal Home Exhibition gave you pleasure when you were a kid. Outside the gallery, you are encouraged to write down your wishes and pin them to a wish tree. She has a new app avail­able, too, which encourages you to photograph yourself smiling, then send your smile to a global smile network at http://t.co/LPBKeDSZ. I am grinning crazily somewhere out there, because the Serpentine show also includes an on-site smile-capturing centre.

With its fertility and free gifts, its journey from gloom to hope, its spectacular inventiveness and those occasional outbursts of grittiness, this is a mightily enjoyable and impressive homecoming. The piece of art at which John first encountered Yoko has been pointedly set up in the final gallery. It’s a white ladder with something tiny written above it on the roof. A handy magnifying glass hanging from the ceiling enables you to climb up and read this tiny message. It says “Yes”.