Nancy Holt’s land art is best seen up close in the Wild West. Now you can get a flavour of it in her first British photo show 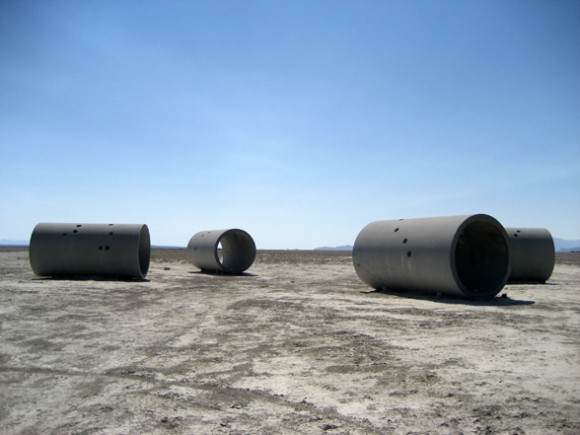 The news that the Nancy Holt show that has opened at the Haunch of Venison gallery is her first solo exhibition in Britain is more than surprising. It’s actually shocking. Holt is one of the world’s most cele­brated land artists. Her work appears in all the textbooks on the subject, and all the films. As the wife of Robert Smithson, the most famous land artist of them all, she even sports a big halo of reflected glory. When he ­created the ­Spiral Jetty, in Utah, the most cele­brated of all examples of land art, Holt was by his side. How can she have been missed?

Perhaps Smithson is actually to blame. With his Easy Rider looks and his tragically early death in 1973, he was one of the first ­artists to inspire a ­rock-star ­following. There was something of the Jim Morrison about him, which his posthumous presence has ­actually managed to enlarge. As Smithson’s wife and witness, Holt has suffered the fate that moons suffer when they dis­appear behind suns. Which is ­terribly unfair.

I have seen Smithson’s Spiral Jetty in the Great Salt Lake. I have also seen Holt’s matching Utah masterpiece, Sun Tunnels, half a day’s drive away in the Great Basin Desert. And, frankly, Sun ­Tunnels was the more exciting experience.

As it happens, among the selection of photoworks by Holt unveiled for us at Haunch of Venison is a set of views of Sun Tunnels, photographed in 1976. Land art sets out to ­create a ­dialogue between ­natural ­wonders and man-made ones. It was nature that gave us the ­endless expanse of sun-­baked desert in which the Sun Tunnels are located, but it was Holt who placed four huge ­concrete pipes at the centre of this ­featureless desert junction, so that it was no longer featureless. Imagine four toilet rolls arranged in a neat cross in a sandpit. Now enlarge that picture 1,000 times.

Sun Tunnels springs to life at sunrise and sunset, when the greys and beiges of the desert turn violently red, then gorgeously pink. Everything glows. The desert explodes. The way the pipes are arranged also allows the rising and setting of the sun to be viewed through them. These are big moments of natural drama, and Holt’s perfectly positioned concrete tubes — their location worked out to the centimetre with the help of a team of astronomers — frame this momentous natural action, shape it and memorialise it.

That’s in real life, though. In the photowork shown here, a set of careful close-ups of one of the tunnels, taken at regular intervals from dawn till dusk, the unfolding of the day is presented as a crisp countdown of knife-sharp shadows and precise outlines. It’s a beautiful effect, but very different. What I remember as a sensual and visceral experience has become all minimalist and mathematical. Turner has turned into Carl Andre.

Given a choice between seeing Sun Tunnels in the flesh and sampling Holt’s precise record of them here, I would, of course, plump for the big outdoor experience. If you ever find yourself in the Wild West, you really shouldn’t miss it. Get yourself a tent, a water bottle and a sleeping bag, and treat yourself to one of the most heady artistic experiences of your life. But, hey, we can’t all get to Utah, and the great virtue of this display is that by removing the distraction of nature, it gives us a clearer view of Holt’s actual artistic direction.

The artist we keep encountering in a selection of pioneering photoworks going back to 1967 is always searching for patterns; always classifying, recording, archiving; always looking for order in chaos. Where nature is mainly an id, Holt is mainly an ego, and the two of them work so interestingly together. In 1975, in a place called Pine ­Barrens, she photographed an assortment of twisted and ­broken pine trees, then proceeded to suck all the loneliness out of them by arranging them in neat rows, like a collector of cigarette cards displaying a complete set of baseball stars.

California Sun Signs, from 1972, shows a lucky dip of street signs found outside motels, shops, schools and garages, all of which feature the word “sun”. So we get The Sunset Palms Resort Hotel; Sunair Drugs; The Sunshine Pre-School. Every sign mentions the sun; no sign feels remotely sunny.

The largest and most intriguing work in the show, Western Graveyards, photographed in 1968, consists of 60 views of individual graves encountered in neglected cemeteries in Nevada and California, on Holt’s first trip to the west. One grave has cactuses growing out of it. Another is made of old railway sleepers. A third consists of ­broken railings bent around a rectangle of bare earth.

Once again, Holt seems to be arranging and classifying these images with a minimalist’s aloofness, as if all she is interested in is the repetitive ­rectangles formed by the graves; once again, a big emotional message about the decay of modern America and the pas­sing of a sunny dream feels as if it is trying to escape from this minimalist prison. Cemeteries, after all, are emotional places, and a ruined grave in a desert is a sight loaded with symbolic baggage.

Holt, you eventually realise, is neither a Turner nor an Andre, but a complex game of ping pong played out between the two tendencies.