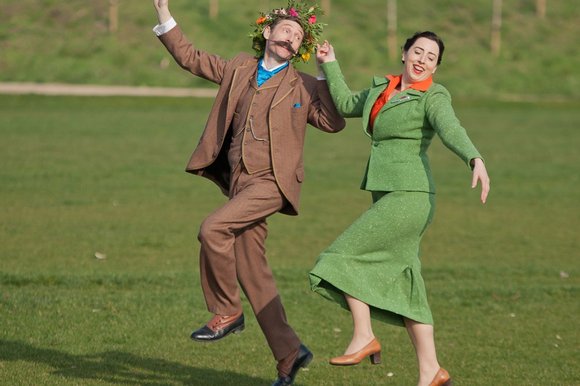 I appear to be the only art critic in Britain who has not been invited on an “exclusive” tour of Anish Kapoor’s Orbit tower at the Olympic site in Stratford. Every other Tom, Dick and Gompertz has been up there, and their collective cheers and boos have been echoing through the ether all week. Listening to this alternating chorus of sighs and moans has made one thing crystal clear: that nothing is crystal clear when it comes to Kapoor’s Orbit. Some love it. Others don’t. It’s either the new Eiffel Tower or a pretentious pile of scrap metal. For every Jonathan Jones there’s a Libby Purves.

Of course, as the art critic you trust, I would have liked to have offered the definitive opinion on the Orbit controversy, but one advantage of being left behind at the bottom of the stairs is that I am able to see more vividly than the others just how poorly art and sport actually go together. In relationship terms, we are witnessing a divorce here, not a marriage.

Reading through the various Orbit tours offered by the other art critics, I was struck by how infrequently sport is even mentioned. The excellent Jones, in The Guardian, liked the tower and argued convincingly that Kapoor’s wobbly whopper was “a drunken party animal” of a sculpture, but only at the end of his enjoyable climb does he remember what “the body of an athlete shares with that of a corpulent farting giant: the pulse of life throbbing and roaring”. Ah yes, I had forgotten. Athletes fart.

Over the next weeks and months you, reader, will be paintballed with gallons of Olympic pap about art and sport. A ginormous marketing exercise called the Cultural Olympiad will attempt to create the impression that these two divergent domains are working together now in London. Do not believe a word of it. All that has actually happened is that lots of artists have been paid lots of lolly to do this and that, here and there. Art isn’t sharing the Olympics. It has been parachuted in.

For proof of that contention, I offer two huge slabs of irrefutable evidence: the whole of art ­history, and your memories of school. To take the art history first: no great art has ever been prompted by sport. None. If you disagree, name me some. Of course, there have been brief moments of interface between the two. As long ago as the original Olympics in Olympia, when an anonymous Greek sculptor carved that famous statue of a chap throwing a discus, art has shown flickers of appreciation of the human body in action. But the Discobolus is one sporty type lost in a huge crowd of ancient gods, nymphs, nereids and Laocoöns.

“What about Stubbs?” I hear a voice in the back row pipe up. What about him? Yes, Stubbs painted beautiful racehorses, but he did so in a spirit of aesthetic appreciation, not because he was interested in the outcome of the Derby. Do not mention Manet to me, either, or Degas, because I know for a fact that both of them haunted Longchamp race-course for what are essentially unsporty reasons. Manet, because he wanted to characterise the crowd that turned up at these posh, horsey occasions, and Degas, because he loved the colours the jockeys were wearing.

“What about George Bellows and boxing?” another voice pipes up at the back. It’s true, Bellows did produce some memorable images of American prizefighters in the 1920s. But I would argue again that it was the harsh urban circumstances in which this brutal pugilism took place that is the real subject of Bellows’s pictures.

Where you would most expect to find a dynamic appreciation of sport — in cubism and futurism — there is effectively none. In real life, Picasso was a keen fan of wrestling, but he made no art about it, or about any other sport. Unless you count bullfighting, which, surely, does not count. When you consider how many circuses and acrobats were painted by Picasso, Léger, Braque at al, it is also a puzzle why so few games of football feature in their oeuvre. What is it that ­circuses offer art that sporting events do not?

The Italian futurists, with their obsession with movement, could hardly avoid sporting issues entirely, but they nearly managed it. Apart from the odd cyclist in motion and Boccioni’s unique foot­balling adventure in Dynamism of a Soccer Player, sport is absent from classic modernism. And when later-isms do engage with it, it is never for sporting reasons. Warhol’s Muhammad Ali is another pin-up. Bacon’s close-ups of Ian Botham’s pads are definitely more interested in Beefy’s thighs than in his cover drives.

To understand this split, I turn to my second locus of evidence: the classroom. Remember when you were at school how there were sporty types in your class, and arty types, and how the two never mixed? How the sporty types were gregarious, good-looking and popular, while the arty types were solitary, plain and lonely? That’s because they represented two distinct human subspecies: Homo sporticus and Homo articus.

These two subspecies look differently, act differently and, most important, think differently. On all the many occasions I have interviewed Kapoor or examined his work, not once has he shown the tiniest glimmer of interest in any sport. Kapoor is most definitely an example of Homo articus. In fact, none of the artists I have met in any professional or social situation has ever struck me as a sports lover.

Away from the artistic Premier League of the Cultural Olympiad, in the smaller shows that have begun opening around the country to commemorate the Olympics, it has been just as noticeable that art’s interest in sport is never a sporting interest. The most memorable exhibit in the Good Sport exhibition at the New Art Gallery in Walsall is a painting of some pigeon fanciers by Andrew Tift. Pigeon fancying is a beautiful human activity, for sure. But can you imagine Usain Bolt doing it? Shouldn’t we see, in the battered pigeon fancier, caring for his birds in his garden shed, an autobiographical metaphor for the artist?

Back in London, the ever-fertile artist known as Bob and Roberta Smith has produced a special Olympic film for Stratford station, in which he imagines the founder of the Olympics, Baron de Coubertin, bumping into the German social philosopher Hannah Arendt, on the Central line, and falling in love with her. Arendt, you may remember, coined the phrase “the banality of evil”, and Smith’s amusing story of their encounter, with its warm and encouraging message about hope in the community, is a delightful addition to the Cultural Olympiad. But I can’t see Jessica Ennis sprinting across Stratford to see it, or having the foggiest notion what it is about. One thing Arendt was certainly not was a German heptathlete.