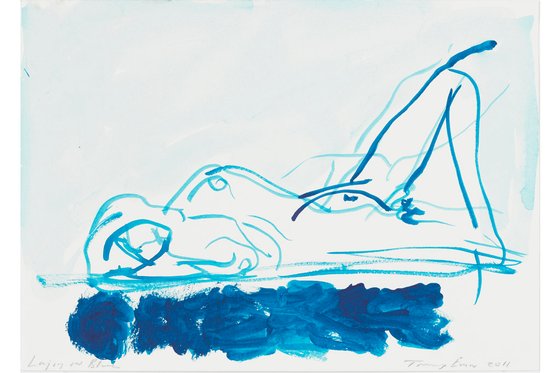 The other day, I came across an old script I wrote in 1997 for a short television item about the Turner prize. The script was called Is Painting Dead? and the little film I made was broadcast the evening the winner was announced. I should immediately explain that not for one second did I actually believe painting was dead. But people had been complaining more loudly than ever that year about the number of video artists on the Turner shortlist, and the subject needed tackling.

The point I was trying to make was that painting was no longer the only way to make art. There were lots of ways of making art: painting was one of them. To discuss this proposition, the television ­people assembled a panel of art worthies and settled us all down on settees for a session of live television earnestness. The conservative philosopher Roger Scruton was there, as was the important art critic David Sylvester. The discussion was chaired by Tim Marlow. Oh, and Tracey Emin turned up. Sort of. ­Staggering into the studio with her mike stuck down her bra, she had obviously enjoyed the Turner prize hospitality enormously that evening, and was now spectacularly drunk. I had asked for her to be on the panel because I thought she would support my view. But as we ­settled down to agonise over the demise or otherwise of painting, it quickly became clear that Tracey was having none of it.

What everyone remembers next about that notorious night of live TV is her noisy departure from the set, and the drunken announcement that she had had enough and was going to see her mother. What everyone ­forgets is that the reason she was so annoyed was that she thought the rest of us were talking rubbish. In Tracey’s eyes, painting could never die. How dare a bunch of senior art ­worthies suggest otherwise?

Her snarling face appeared before me again as I stood on Margate beach last week and stared up at the ridiculously suave and minimalist art gallery that now graces the seafront here: the Turner Contemporary. The show I had just exited was the most conser­vative display of old-fashioned mark-making I have seen by Emin. Bits of it reminded me of Egon Schiele. Other bits reminded me of Picasso. There was a touch of Munch here, a touch of Matisse there. It was as if every single progressive art movement of the post-war period had never happened, and we were back in the classic years of modern art.

Emin, of course, comes from Margate, and her work has pre­viously been packed with dark references to her childhood here. This is where she was raped. This is where she found out what experienced men do to inexperienced women. In the old days, she spoke of little else in her art except the civic terror visited on little girls growing up in Margate. But, having done more than anyone else alive to put her home town on the map, for the worst reason, Emin’s ­memories have softened, and this particular show is the most beautiful I have seen by her.

It’s called She Lay Down Deep Beneath the Sea, a typically soppy Emin title of the kind Shelley might have come up with had he worked on the checkout at Tesco in the 1980s. All the exhibits are new and made specially for this display. Most of them feature Emin herself, in the nude, lying down, making love, pleasuring herself, dreaming. So far, so predictable. What’s different is the atmosphere. Gone is the anger. Gone is the man-bashing. In their place, an air of wistful nostalgia seems to have seeped into her art. Where previously it was Margate’s darknesses and cruelty she remembered, here she seems to be reliving the nice bits. The sensuous experience of making love. The good side of having a boyfriend.

Some of this softening should probably be understood as a reaction to the sheer beauty of these exquisite exhibition spaces. Designed by the immaculately progressive David Chipperfield, Turner Contemporary is prob­ably the most elegant gallery interior in Britain right now. Anger and spite will never get much encouragement in here. When you look out of the ­windows, all you can see is the sea, rolling and encompassing. It’s a beautiful effect, and the proximity of the lapping water seems to have inspired a set of gentle reflections in Emin, on love and blokes and paddling. Although you do not actually encounter an old scrapbook filled with pressed flowers and portraits of former lovers, you feel its presence everywhere.

A few of the nudes are ­fashioned from neon. Some are embroidered on white calico. There are even some sculptures. But the overall effect is of female bodies, quickly drawn, arching and stretching, captured instinctively from inside out. That scratchy touch of Emin’s, light as a sparrow, fragile as a chicken bone, dominates all these effects, and I fancy this will be recognised as the event at which Dame Tracey Emin, staunch defender of the artist’s touch, stepped fully out of the closet. I was going to say she will be joining the Royal Academy next, and telling us to vote for Cameron. Except she has already done that.