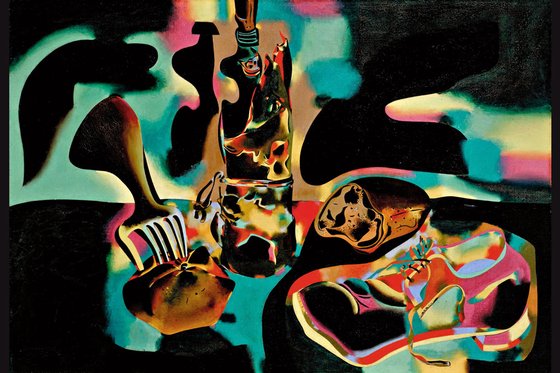 There’s one at Barcelona airport. And another in the middle of Chicago, opposite the big Picasso. Unesco’s headquarters in Paris has one, and the Guggenheim in New York. There used to be one inside the World Trade Center, but the 9/11 hijackers took it out, the most expensive artwork lost in the destruction. The largest one I’ve seen is in Wichita, Kansas, where it is plastered across an entire flank of the university museum, 50ft wide and counting. One thing the world is not short of is big Miros.

With so many of them out there, all showing more or less the same thing, the loss of the Miro tapestry in the World Trade Center did not really register as an art-world tragedy. There were more serious matters to grieve over, of course, and far graver losses. Besides, in the end, it was only a Miro. If that sounds harsh, so be it. Not for one moment do I mean to forgive or condone the destruction of any work of art. But Miro was too productive for his own good. So corporate-friendly was his art, so readily did it attach itself to sensations of bland cheerfulness, his oeuvre has acquired an unfortunate air of repetition and disposability. Miro said yes too often.

Exactly the same thing happened to our own Henry Moore. The longer he lived, the more popular he became, the more he produced and the less special his work began to feel. In the end, the barbarous art-watcher Tom Wolfe could successfully complain of encountering “a turd in every plaza”.

At least Moore confined his furious productivity to civic sculpture. Miro’s outpouring knew no such bounds. Mosaics, tapestries, murals, pavements (you’ve walked on him if you’ve walked down the Ramblas, in Barcelona), stained glass, coloured steel, every type of print imaginable — the cascade poured out of him in every medium. Don’t even get me started on his books. Miro produced 250 artist’s books, although it felt like more. There may well be eagle-eyed Miro twitchers out there who can spot the difference between one of his tomes and another, but I am not of their number.

Forgive this unseemly negativity towards an artist whom Tate Modern is describing as “one of the 20th century’s greatest” as it prepares to unveil the first significant Miro show to be mounted in Britain for 50 years. It will bring together masterpieces from all the phases of his exceptionally long career — he died on Christmas Day 1983, aged 90 — and promises to challenge important misunderstandings we have about him.

In particular, the organisers will argue that there was a political dimension to Miro’s art that is generally missed. The great decorator of airport exteriors and corporate walls, of plazas and offices, foyers and walkways, was actually a fierce political beast with a secret agenda, the Tate will claim.

Hmmm. I suppose it had to happen. The only way to go in any investigation of Miro is deeper. In arguing that his playfulness was deceptive, the Tate is being predictable. But, as my old mother used always to advise me, never catch someone else’s ball. Before we take these Tate revisionists at their word and jump happily into the big, steaming bath of Miro hype they have prepared for us, we need to ask ourselves why it has really taken 50 years for such a show to be mounted. Why have we spent half a century avoiding Miro?

In this same period, after all, his great compatriot, Picasso, has had countless grand unveilings. Every aspect of Picasso’s creativity has been well and truly raked over.

So, too, has the talent of that other 20th-century Spanish giant, Salvador Dali, even though Dali is rightly suspected of having a talent tinged with evil. No such doubts surround the goodly intentions of Miro. What, therefore, has displeased us about him?

His lack of depth would be my first answer. With Miro, there is a sense that all the tunes are being played on a triangle, even the symphonies. Just as his productivity has been held against him, so has his cheerfulness. A typical Miro is so damn typical. Bouncy blobs. Kiddie colours. A spider shape here. A froggy face there. The tapestry at the Twin Towers was mildly different, in that its lower edge was woven to be ragged, as if it were unravelling, but even this untypical device seemed, in its playfulness and the amount of invention involved in coming up with it, so typically him.

In fact, Miro lived through seriously tumultuous times. Born in Barcelona in 1893, he was a Catalan, and Catalans are political from their sperm stage. Not until they finally achieve their eternally fought-for independence from Madrid will they cease to define themselves by their opposition. Miro’s parents were sophisticated and well off, dad a goldsmith, mum from Mallorca, but his first successful paintings are never theless filled with such wild-eyed Catalan primitivism: a farmyard packed with agricultural odds and sods; a field being ploughed; a twirling dance of Catalan peasants, with their twirling peasant moustaches.

The Tate will seek to present all this as a paean to deeply rooted national values, but peasant chic was actually all the rage in Europe at the time. Kandinsky, Malevich, Goncharova and scores of others were all looking to their national serfs for an aesthetic example. You didn’t have to be Catalan to turn to your peasants for guidance.

In Paris, in the 1920s, he fell in with the surrealists and turned quickly into the Miro we love best, the zippy painter of blobs and biomorphs that whizz about brightly coloured canvases with a sense of direction borrowed from the dodgems at a fairground. Miro’s Parisian art has been dismissed as surrealism lite, but his best pictures from the period are actually very moving and intense. Particularly when he gets rid of most of the busy cast and focuses instead on a single biomorph, howling at the moon, alone with its destiny. We need, surely, to see these existential amoeboids as self-portraits. Who would have thought that a lonely blob would ever worry this deeply about the meaning of the cosmos?

So far, so good. Few would argue against the proposition that, until the second world war, Miro was an intense and brilliant artist. It’s what happened next that disappoints. The second half of his career is usually understood as a decline. Having developed his lively repertoire of cheery blobs and zippy sperm, Miro spent the rest of his working life, fully 40 years of it, blowing them up to billboard size and repeating them endlessly. His work became relentlessly playful, relentlessly childlike, annoyingly humorous. Or so it seemed.

In the real world, post-war Spain was struggling to survive the fascist dictatorship of General Franco. But that was in the real world. In Miro’s art, there was no trace of repression, violence, censorship. It’s as if his creativity had deliberately retreated into a private fairyland of colourful blobs and bouncing fairies. Miro was living in Spain, but time-sharing in cloud-cuckoo-land. The chief spirit animating his post-war biomorphs seemed to be the spirit of avoidance.

A few months after Franco died, I was sent to Barcelona on one of my earliest journalistic assignments, and made a beeline for the Miro Foundation, in Barcelona, the institution that is co-organising the upcoming Miro fest with the Tate. Placed prominently on the summit of a hill, with the whole of Barcelona stretching away beneath it, the Miro Foundation was big, bold and bright. It had only recently opened, and appeared to embody the new spirit in Spain.

I wanted so much to be convinced by the extra-large Miros gathered for a big coming-out parade inside. Unfortunately, it just didn’t happen. A limited repertoire of ideas seemed to be being stretched far beyond its natural scale. The Miro Foundation seemed to be filled with art that had grown bigger and bigger, but not deeper and deeper.

The upcoming Tate show will beg to differ, of course. It will seek to show that Miro’s playfulness has been overstated, his childishness misunderstood, his depth ignored. Far from the one-dimensional play-master of legend, what he really was was a cunning and involved observer of world affairs, whose seeming detachment from world affairs during the rule of Franco should be understood not as withdrawal, but as a strategy.

All of which would be excellent. If it were true.